As I type this, I’m somewhere in the air looking down on the sea during a short flight to Coffs Harbour. Modern technology eh?
We’ve just left Sydney, where we spent four nights which gave us an extremely hectic introduction to Australia. We’ve crammed so much into these five days, I literally don’t feel like I’ve stopped. It’s not often you arrive at a place jet lagged and leave just as (if not more) tired. I’ve seen the sights, drank a load of Carlton Draught and been on Mike’s stag do, or “buck’s night”, as it’s called over here.

It was all going so well…

So Saturday night was the stag do and, as you see in the films, it got a little out of hand. It all started so calmly too; we jumped on the ferry over to Manly (nearly missing it, as usual), had our meetings and greetings with the soon to be in-laws, sank a few schooners and made our way to “Rock ‘n’ Bowl” for a few hours of barefooted bowls. Sounds pretty chilled, doesn’t it?
It’s amazing the impact countless jugs of lager and a day in the sun can have. 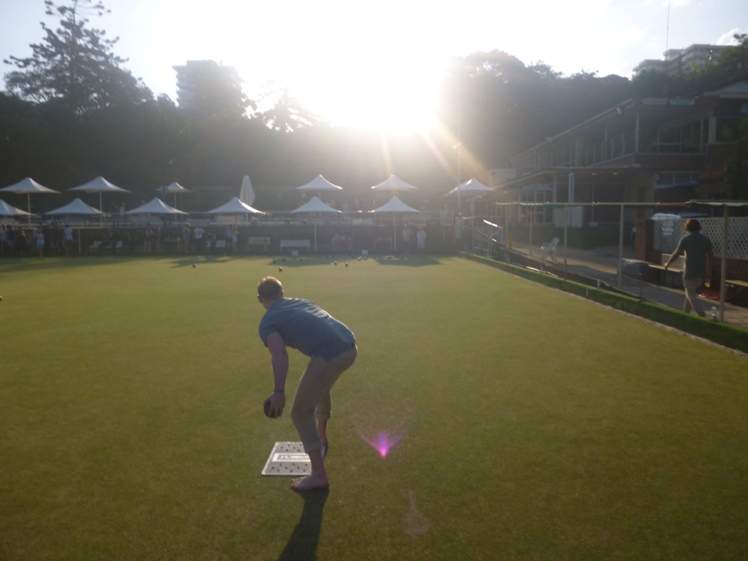 Fast forward to 2am and I’m stood in a seedy tattoo parlour in Kings Cross. Three members of the party are queuing up and handing over $100 each to get each other’s names inked on themselves. A few winces and Facebook pictures later and we’re done. The guy in the shop will never make an easier $300.
After that, myself and my step dad decided that was enough for one day/night/lifetime so went out to flag ourselves a taxi to take us back to the apartment. What followed was to be one of the most stressful experiences of my life (even more so than conceding a last minute equaliser on Football Manager, honestly).
Every single taxi had an excuse not to take us. Some argued it was too far, others said they weren’t on the right side of the road, and other simply weren’t interested because I don’t have breasts. Ok, they didn’t say that last one, but that’s the impression I got. I’m not sure if taxi drivers in Sydney are paid differently or something, but my argument of “the longer we go, the more you earn” seemed to fall on deaf ears.

Thankfully didn’t need a taxi to get here!

I have never had to tactically plan flagging down a taxi, but I guess there’s a first time for everything. Even Jose Mourinho would have struggled to plot a successful result out of this debacle. If you’re interested, the way to work around it is to have one person on either side of the road, and for both of you to wave like a madman until someone sympathises with you.
I will never complain about getting a taxi from Call Lane again.
Anyway, that’s that. As a complete aside, as I typed that I managed to spill a drink down my crotch (probably because I was getting so wound up), so you better have bloody well enjoyed it.

I managed to do this, in all my rage…

As another aside, I finished and posted this from the hotel room in Coffs Harbour. All I can say with regards to first impressions is that it’s bloody hot, there’s a big banana in the city and there are a shitload of giant lizards here. So far so good.
Edited with BlogPad Pro