Next on the list of “Should I Stay At…” is Brisbane City Backpackers, where I spent two weeks in April this year. In case you missed it, you can find my previous review of “Sleeping Inn Surfers Paradise” here.

With my six nights in Surfers Paradise coming to an end, I had to quickly make up my mind about my next destination. I had initially planned to head down to Byron Bay as I’d heard good things, but the fact it was the weekend of the Blues Festival meant hostel prices were through the roof.

With this in mind, I booked an initial three nights at Brisbane City Backpackers with the intention of heading down to Byron once the weekend was over. I’d heard mixed reviews about Brisbane, and a number of people had told me they struggled to make friends and that there wasn’t really much to do. Despite this, I thought I’d give it a go anyway.

On a side note; I never did go to Byron, which is one of my major travel regrets.

When you’re travelling with a backpack, you instantly hope that any hostel isn’t too far from where the Greyhound drops you off. Thankfully, Brisbane City Backpackers was only a 2/3 minute walk. To make matters easier, the building is bright orange too so you can’t really miss it.

The Suncorp Stadium is just round the corner too.

The hostel is close to amenities such as a Coles supermarket and other eateries, but is probably a good 10/15 minute walk from the South Bank area of the city and the main shopping areas like Queen Street. The main nightlife of Fortitude Valley is a taxi ride away too, as I discovered when I tried to walk there on my first day!

City Backpackers does excel here. My six bed dorm was exactly what you’d expect from a hostel and came fully equipped with air-con. I will say that it’s a little tough if you’re in a room facing the road though, as the trains and buses tend to be really noisy.

Arguably the most useful feature of this hostel for those on a working visa is the free job club. It can be tough for backpackers to find work, so this was an absolute godsend. All you have to do is leave your details with reception and they’ll let you know when something comes in that’s suited to you. I got two days of manual labouring (yeah, me…) through this which paid for me to go to the AFL and the koala sanctuary, which was obviously really useful! I guess you could say the job club is responsible for me meeting John Travolta.

The on-site bar is reasonably priced during happy hour (by Australian standards at least!) and there are two of these per day. In addition there are always events organised such as karaoke, poker, a quiz and killer pool just to name a few. The fancy dress nights were also a personal favourite! The only downside to an on-site bar is that you are prohibited from bringing your own alcohol into the hostel, which means cheap goon nights are a no-go! For those looking for a cheap, quiet night however, the cinema room shows five movies a day. 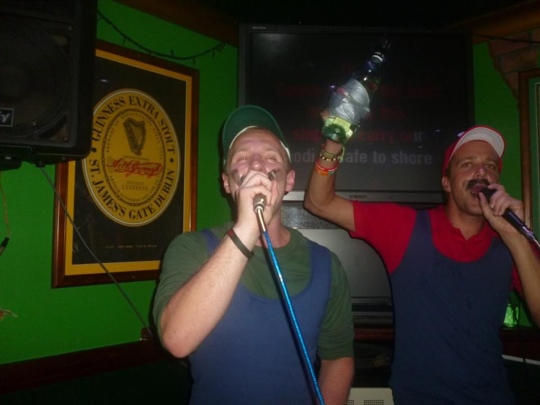 Although I didn’t use the swimming pool (I’m much more of a sunbather!) I didn’t hear any complaints and it looked to be one of the more well-maintained hostel pools I saw.

For a hostel that sleeps around 300 people, the kitchen is criminally small and you’re lucky to get a hob at peak times. The fridges can be tough to negotiate too, as 99% of guests seem to have the same blue Coles chiller bags!

As mentioned above, the hostel sleeps around 300 people which means there’s always going to be someone doing something. The longer you stay, the more you’ll get to know people.

I found that the aforementioned job club helped, as a number of guests were in Brisbane for the long-term having found work. Some of the reviews I read prior to my stay were critical of this fact, but I personally don’t see a problem with it. Each to their own I guess.

As you may expect from a city centre hostel, Brisbane City Backpackers isn’t the cheapest. For a six bed dorm I found myself paying $30 a night which was slightly discounted as I ended up paying for seven nights at a time.

Cheap wine, not so cheap rooms,

I did meet people who were staying in dorms which slept 30 people, and they were considerably cheaper at around $23 a night I believe. However in my opinion this isn’t exactly cheap when you consider you’re not likely to get much sleep. I guess it all depends what you’re after. I’d argue that, considering the amenities, these prices are reasonable.

Brisbane City Backpackers is a great place to stop if you’re looking for a flying visit to Brisbane. However unless you’re working, I wouldn’t recommend a long term stay here on a tight budget. For the money though you do get good rooms and a great atmosphere. All in all, a really enjoyable hostel to stay at.

One response to “Should I Stay At…Brisbane City Backpackers?”