One of the few things I had heard about and really wanted to do in Bangkok was visit one of the famous floating markets. At home I tend to avoid markets like the plague and I will pretty much do the same on holiday because I can’t be bothered getting hassled for the same old tat from every different hawker. There’s only so many times I can be asked whether I support Man United or Man City, and then go on to explain where Rochdale is, what division they play in and why I support them instead.

The floating markets of Bangkok however, appealed to me for a number of reasons. Firstly as the name suggests, they’re on the water; how cool is that?! Secondly (and more predictably), I’d heard how much amazing food they sell there so thought I needed to get myself a piece of the action. I don’t know about you, but having someone sail me along the river whilst buying Pad Thai from another boat sounds like my idea of a good day out.

A couple of local market traders

Thankfully, our hostel is one of the best I’ve ever stayed at and the owners are more than happy to organise pretty much anything you ask them to. We managed to get a morning trip to the Damnoen Saduak market which included minibus travel there and back, an hour at the market and then a half hour speedboat ride through the surrounding areas for 250 baht. When you consider that the market is around an hour and a half away from central Bangkok (to get a taxi as a tourist would end up costing a small fortune), you can’t help but feel this was a bargain.

On arrival we paid 150 baht each for a slow boat did around the market and this is where the fun started. We were hassled (in a good way) pretty much from the first minute by people selling everything from packets of spices to scarves and pretty much everything in between. It does tend to get pretty repetitive pretty quickly and it’s no surprise that one of the first Thai phrases I learnt was “no thanks”.

One thing I will say is that you can’t be scared to bargain with these people and I guess that applies to a lot of things here. I’ve been here five days now and I’m already beginning to realise how much I was getting ripped off in the first few days. It may feel like monopoly money but it’s bound to add up eventually. 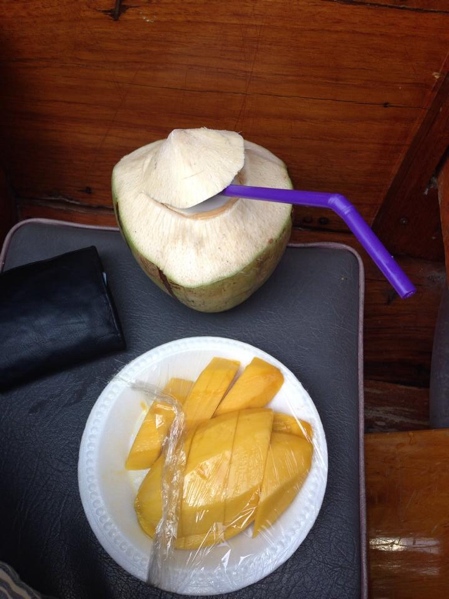 My purchases for the day!

As I’m travelling indefinitely, I’m not really keen to hoard much more stuff than I already do. I don’t really know the meaning of travelling light and my backpack is pretty full already. With this in mind, everything I bought at the market was consumable. I bought a coconut and a plate of mango on the water (I know, I’m so adventurous) for next to nothing. If I do come back to Bangkok towards the end of my trip I’ll definitely visit the market again and buy a load of presents, so I hope my friends and family like small elephant and tuk tuk statues.

The personal highlight of the markets, however, was holding a couple of pretty huge snakes. I’m an absolute sucker for anything a bit random, so I practically jumped out of the boat before he even had chance to sell it to me. I didn’t even ask the price; a rookie mistake.

The guy asked if I wanted to hold the small one, so I bottled it a little and said yes. What I didn’t realise was that he was offering me the chance to hold the small one as well as the big one. I’m pretty sure as many expletives have and will never leave my mouth in such a small period of time. I’ll not even get started on him trying to shove the thing down my trousers.

After being offered a load more stuff my gran wouldn’t even have in her living room, eating some tasty pork ramen noodles and going on the speedboat tour it was time to head back to the madness that is Bangkok with a much fuller stomach and frayed nerves. A successful day out in my book!