It’s no big secret that I fancy myself as something of a master chef. I’ve got a foul mouth, a fairly short temper and I’m even pretty good at cooking.

Thai food is right at the top my my list of favourite cuisines along with Indian and Japanese (until I’m drunk, in which case doner meat, chips and cheese wins almost every time), so a Thai cooking class was a must for me whilst in the country.

We arrived in Pai with very few plans. The previous 10 days or so had been pretty hectic so we were looking forward to a few days of downtime and here seemed like the perfect place for it. Pai has a reputation as a chilled out town where you can kick back and pretty much do nothing, which is perhaps the reason a lot of people stay there a while. From our lofty hut up in the mountains, it was easy to see how people get used to Pai life.

Knocking together the biggest portion of fried bananas known to man!

Despite the lack of nightlife and our best intentions to chill out, we still ended up drunk two of our three nights here. Sangsom rum really should cost more than 50 baht.

We arrived at the Red Orchid cooking school at 11am on day three all feeling a little delicate but looking forward to a day of at least attempting to learn something. Thankfully we had all pre-chosen our dishes when we booked the course two days beforehand, as I think we may have struggled to be tempted by anything on offer on the day in our state.

My five dishes were:

Making the curry paste was probably the most tasking part of the day as we pounded about 10 ingredients in a mortar and pestle for what felt like 20 minutes. What we were left with was a highly unappetising looking mush which smelt amazing, and in Reid’s case, a rogue chilli seed in the eye for his troubles. You just can’t buy that sort of authenticity in a jar. 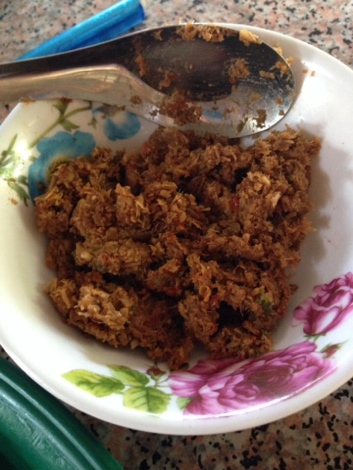 What amazed me was how quickly these dishes can be put together, in particular the curries. Most recipes I’ve ever read always say something ridiculous like “allow to simmer for 45 minutes etc…” whereas here we put the wok on a medium/high heat, threw everything in and just stirred continuously. Most dishes were ready after about 10 minutes cooking time so yeah; screw you Patak’s. 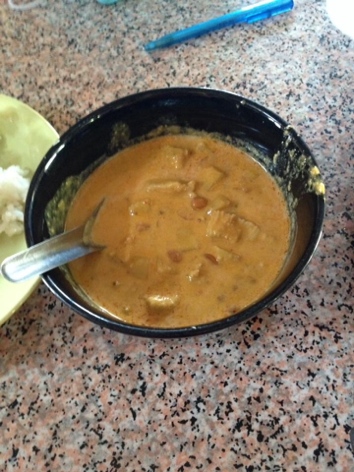 The day was broken up by a trip to the local market which was good fun and a great rest for our stomachs. Two full curries before mid-afternoon is a challenge I would like to see any hungover person partake in. It was really interesting to see how much easier it is for locals to shop at the market without being pestered by over-enthusiastic traders.

The rest of the day continued in pretty much the same fashion although three more people joined the class in the afternoon so things moved slightly slower. All credit must go to Dao who ran the class along with her assistants including a hyperactive 15 year old who held it together and kept everything ticking over. The staff kept referring to the 15 year old as “ting tong”. I can only assume this is the Thai term for “bonkers”.

The best fish I’ve ever tasted, and not just because I made it!

We polished off three more courses with a great struggle and it was time to head back to bed to slip into a food coma. We left with our recipe books (which I left in the 7-11 five minutes later) and a big hug from Dao and a high five from the “ting tong” girl.

Despite my lack of a recipe book, I feel much more confident in my Thai cooking skills after taking the class and would recommend it to anyone. As for when I get home; I hope my friends and family like Thai food.