I arrived in Ho Chi Minh City with absolutely no plans, as is often the case with my travels. This isn’t down to my incompetence, I just prefer not to make too many solid plans when I don’t have a time limit on my travels.

The check in lady at Manchester airport, however, had other ideas when I attempted to check in for my flight to Bangkok and I was told to book a flight out of Thailand there and then or don’t fly. A quick Skyscanner search revealed Ho Chi Minh to be one of the quicker and cheaper flights out of Thailand and as a result: here I am!

I’m lucky enough to have friends (or is your sister in-law’s brother technically family?) who are teaching in Ho Chi Minh and they were kind enough to offer to put me up for my stay in the city. I figured I’d pick their brains for things to do once I arrived and one suggestion was to pay a visit to the War Remnants Museum, which I did on my first full day. 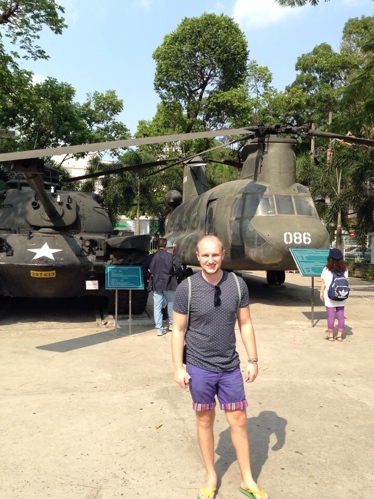 My childish side loved all the tanks!

History is something that always intrigues me. I always enjoyed history lessons at school, although I admit my knowledge of lots of historical events is sketchy at best. One thing I do try and do when I stay somewhere however is learn about the local history. Seeing as the Vietnam War was a huge event in history and I know next to nothing about it, I was very keen to learn more.

Upon arrival I was blown away by two things. Firstly, the entrance fee of 15,000 Vietnamese Dong. To people who are unaware of the local currency that may sound like a lot until I tell you that £1 gets you around 34,000 Dong. Entry cost me less than 50p and, strangely enough, less than the can of coke I bought inside too.

Cheaper than a can of Coke!

Secondly, as soon as I walked in I was surrounded by a number of tanks, fighter jets and boats from the war. It was very interesting yet devastating to hear about the damage each vehicle caused to the country of Vietnam and its people as the cold, hard facts were presented alongside each exhibition.

It’s important to remember though, that the museum shows the war from a Vietnamese point of view and therefore certain parts should perhaps be taken with a pinch of salt (as you would with anything that shows only one viewpoint). The whole first floor was dedicated to showing the world’s support of Vietnam during the war, and the war itself is regularly referred to as “America’s aggressive war against Vietnam”, or words to that effect.

Having said that, it’s pretty hard to take a lot of the photographs with a pinch of salt when they seem so blatant. Particularly graphic was the section of the museum dedicated to “Agent Orange” – the US army’s use of herbicides which left many locals with deformities and is still affecting children to this day. It’s upsetting stuff and certainly not for the faint hearted.

Earlier on, I had been approached by a guy outside the museum who had stumps for arms which could very well have been an effect of Agent Orange. He tried to sell me a couple of books, one of which was “The Girl In The Picture”. This book is the story of Kim Phuc, a girl who is pictured running away from the site of a napalm bomb in one of the most unforgettable images from the war.

One of many disturbing photos on display.

At the time I wasn’t aware of the story but in hindsight I would like to read the book and I wish I’d bought it from him as he was a very friendly guy. At times in Asia it can be easy to ignore the hawkers trying to sell you stuff and assume they’re all trying to flog you the same old tat but I guess this proved that it’s not always the case. Vietnam seems less intense than Bangkok in terms of street traders trying to pull a quick one on you. Maybe I should loosen up a little.

Before I knew it, it was time to leave as I had made plans for the evening. I would recommend that anyone who visits the museum gives themselves much more time than they feel they need, even if you don’t think you’ll be that interested in it. It’s very easy to walk round at a slow pace and there’s lots to see and read – you need to get your 40p’s worth!

I quickly whizzed around the imprisonment section which contained a replica of the buildings and some pretty graphic explanations of the conditions and punishments that Vietnamese prisoners were subjected to. These were, as you can imagine, rather grim.

How a typical prisoner was supposedly treated.

All this walking and learning made me thirsty, so it was beer time. I left the museum feeling much better about my knowledge on the subject of the war. I don’t think I’ll be qualifying as a professor of Vietnamese history any time soon, but I think learning a bit about the local history is the least you can do when you visit somewhere.

I even managed to retain it all despite the beers that followed, which is always a good thing!

One response to “Vietnam War Remnants Museum: Addressing My Ignorance”