Back in the UK, I will do absolutely anything to avoid using them. Give me a car or a train any day. Providing it’s not lashing down, I’ll even walk somewhere to avoid having to catch a bus.

I just dislike absolutely everything about them. They’re usually dirty, slow, loud and some of the clientele are really not the sort of people I would ever want to be sharing a roof or, even worse, a seat with. Call me a snob; I don’t really care.

However, since I have been in Vietnam it has often worked out around four times cheaper to catch an overnight bus between destinations than to ride the train or fly. As a result, I’ve caught two overnight buses so far, and will be spending the next five days or so planning bus journeys through Cambodia back to Thailand.

I’ve heard lots of people complain about the night buses, calling them “the journey from hell” and so forth and it got me thinking: are they really that bad? So, based on my experiences so far, I’ve decided to weigh up the pros and cons of overnight buses.

As I mentioned before, the cost of catching an overnight bus compared to a train can often make it a no-brainer for budget tourists. Take, for example, the first bus I took from Hoi An to Nha Trang.

I priced up the train and was more than ready to buy a ticket when it came in at £27, as 12 hours on a train sounded pretty tolerable if previous experiences were anything to go by. A fellow traveller then pointed out that the same journey was costing her the equivalent of £7 on a bus and the tightarse in me got the better of me. It was time to swallow my pride and catch a bus.

This could quite easily go in the costs section, but a lot of budget travellers often take the overnight bus to save accommodation costs for one night. Don’t get me wrong – the bed/reclining seat you are given doesn’t compare to a bed in a hostel (although some run it close), but if you’re like me and can sleep almost anywhere you’ll be ok.

Home for the night…

I like to make the most of my days. Even if I just go and lie on a beach, I feel like I’ve at least gone out and done something. The beauty of overnight travel is that it is exactly what it says it is. You tend to leave late on in the evening and arrive early morning, so essentially all you’ve missed is a night in a hostel or a night on the lash.

You might not be as fresh as you would have been from a night in a real bed, but at least you have all of the next day to explore your new destination…or recover on the beach!

The saying “you get what you pay for” has never been more apt than when talking about a night bus. Think about it like this: you’re paying £7 for a 12 hour journey with a bed – how good can it really be? It costs me about the same to make a half hour journey to Manchester at home on a Northern Rail train – I genuinely don’t know which one is more uncomfortable.

Another particularly apt saying would be “packed in like sardines”. It’s safe to say that these buses weren’t designed with westerners in mind, as even I struggle to fit my feet into the bizarre little coffin-like box that you’re given…and I’m 5ft7. You’ll find yourself sleeping in some peculiar positions, so prepare for a few aches the next day. 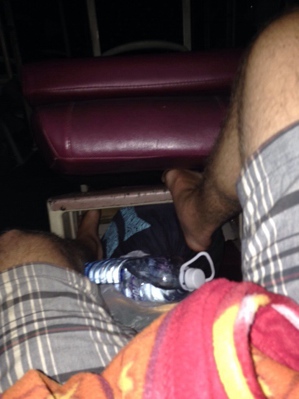 Finally, on the topic of comfort, an honourable mention must go to the Vietnamese bus drivers, who seem to see the pot-holed country roads as their opportunity to do their best Lewis Hamilton impression. There’s nothing quite like drifting off to sleep and waking up 10 minutes later as you stop yourself falling out of your seat.

The aforementioned Lewis Hamilton wannabes are also, like all Vietnamese drivers, very fond of using the horn on their vehicles. Now, I know that there is a reason for this. Back home, people only tend to use their horn if they’re extremely pissed off or if they see a mate walking down the street. In Vietnam however, it’s simply a sign that you’re behind someone as they pull out, or that you’re going faster than them and are politely telling them to shift.

I’m not sure how many people are actually on the roads at 3am, but judging by the drivers’ use of the horn, it seems that there are more than during rush hour! Maybe I’m just tired and irritable by this point, but it is extremely irritating when you’re trying to get some much needed shut-eye.

…or lack thereof. I didn’t think it could get much worse than my Hoi An – Nha Trang journey. On this particular bus, the on board toilet was more cramped than the beds and, bizarrely, faced backwards. Taking a leak on a moving vehicle is tough enough, but when the drivers’ use of the brakes almost sends you back halfway down the bus when you’re in mid-flow the task becomes even harder. The floor was predictably, rather wet and the seat too. I felt very sorry for any females on board.

This was a walk in the park though, compared to my journey from Da Lat to Saigon. Upon taking my seat, I did my usual routine of getting out my iPod and scouting out the toilet. To my dismay, there wasn’t a single toilet on board! The journey was supposed to take six hours and I wasn’t particularly comfortable with this fact. We had one toilet stop on the way which, if I hadn’t slept for the journey, could have been slightly problematic.

My advice would be to stock up on Imodium or lay off the chillies in the days easing up to the journey…unless you fancy a particularly awkward conversation with the conductor when you’re at breaking point!

I think that ultimately, you get what you pay for with a sleeper bus. Yes, they’re uncomfortable, noisy and sometimes lack toilets, but for £7 do you really expect much more? They’re a basic, cheap option for a budget traveller and shouldn’t be seen as anything more. I can’t really do the experience justice in words though, it truly is something you have to try for yourself!

2 responses to “Overnight Buses: Great Budget Option Or The Journey From Hell?”