Well, that was mental.

I was under no illusions that celebrating the Buddhist new year in Bangkok would be anything other than fairly hectic, but no amount of YouTube footage can properly prepare you for the madness that is Songkran.

Thailand essentially turns into one giant water fight for three days, which is every bit as fun as it sounds. About 90% of the population turn into arms dealers, as the streets are rammed with thousands of Thai Alan Sugar wannabes selling water guns, buckets, clay and ice cold water amongst many other things. Upon arrival at the always brilliant Born Free Hostel, I kitted myself out with a stupidly large super soaker and set off towards Khao San Road with a few of my fellow backpackers to get in the mix.

Ready for the madness!

There doesn’t appear to be many rules, which means everyone goes into it with a pretty chilled out attitude. I think the only unwritten rule is that you don’t soak the shit out of old people, which is pretty fair I guess. I’ve got to say though that their faces are a picture when you accidentally land one right in their face! I’m well aware that I’m going to hell.

I honestly can’t do Songkran justice, so I’ll let the video put together by Kevin from the hostel do the talking. Watch out for a particularly touching moment at 4.50mins. If that doesn’t melt your heart then I can only assume you don’t have one.

Can you imagine the carnage if this was to happen in England? New Year’s Eve is as good an excuse as any for the lager louts to get boozed up and have a scrap – so I dread to think how they’d be when a battle of sorts is actually encouraged. I can almost see the white vests, flying fists, British bulldog tattoos and cans of Carling right now. 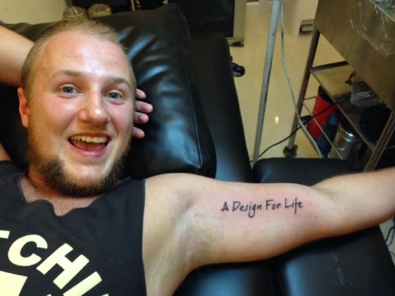 Yes, this was a sober decision.

As you can probably imagine, the novelty of Songkran can wear off fairly quickly. It’s a great laugh when you’re getting involved and have a gun yourself. However when you can’t do something small like nip to the next street to get some food without getting covered in water and clay, it can be a bit frustrating. Remember when I said I was turning into a grumpy old man? No idea where I got that idea from…

Nipped out to buy some flip flops. Came back like this.

Sadly, it’s not all fun and games. Year upon year, many people are seriously injured and a number of deaths are recorded across the country from a number of causes – most it appears are on the roads. As it stands today (Thursday 17th April), the death toll is at 248 which seems to be down on last year. The fact the authorities were quoted as aiming for “only 300 deaths” this year speaks volumes.

It’s not difficult to see how these things happen either. People stand on the side of the road waiting for passing cars and motorbikes so they can spray them with water – so accidents are inevitable. I remember getting a right telling off when I was a kid and my mum thought she saw me throwing water bombs at cars!

Having got split up from the group on my first day, I rather naively decided to try and tackle Khao San Road. Having moved about 50 yards in 20 minutes, I decided to look for the nearest exit as we weren’t moving but people were still pushing from behind. I’m usually good in crowded spaces, as my gig-going friends will testify, but this made me feel very uneasy to say the least.

Disturbingly, there were also a few more sinister incidents that we were witness to. On the first night of the celebrations, we hit Khao San Road for a “few” drinks. 2am came around and one of the lads we were with decided he was too drunk and needed to walk back to the hostel. He eventually returned at 9am, having been bundled into the back of a van, robbed, and left in the middle of nowhere. He also picked up a huge cut on the bottom of his foot for his troubles – presumably after stepping on glass.

A couple of days later, we were in a similar area during the day when an ambulance sped past us to tend to a guy lying on the ground. He looked to have suffered a big blow to the head, and the word from the “rubber neckers” in the area was that he’d been attacked from the back of a passing motorbike with a knife. Whether this was true or not is a mystery, but it really shows how much you need to have your wits about you.

Despite all that has been said above, I would recommend Songkran in Bangkok to anyone. I had some of the craziest days of my travels so far, and what’s not to like about a huge water fight? Keep your wits about you, know your surroundings, embrace the scenario and you’ll have an absolute blast!

4 responses to “The Good, The Bad And The Ugly Sides Of Songkran”