I just don’t get Chiang Mai.

I’m well aware this is probably a controversial statement. I’m ready for a backlash from the masses of people I’ve spoken to that love it but the truth is; I really don’t see what the fuss is about.

This is my second visit to Chiang Mai. My first visit was towards the end of February when we did the jungle trek and a visit to Chiang Rai and the Golden Triangle where Thailand, Burma and Laos all meet. Don’t get me wrong; these were all great things to do but they weren’t actually in Chiang Mai. The jungle trek was a good hour away and Chiang Rai is a completely different city!

Trekking through the jungle is great fun, but it’s not actually in Chiang Mai!

In my two visits here I’ve seen a few temples, been to the night bazaar (which doesn’t seem to sell anything you can’t buy elsewhere in Thailand) and been to watch Muay Thai twice. Other than that, I’ve genuinely struggled to find things to do in the city. It’s not that I’m expecting to walk out of my hostel and be faced with a million and one things to do – I’d just like an insight into why so many people love this city.

I have, on occasion, found myself wondering if there’s an entire area of the city that I’m yet to discover but it seems there isn’t. Maybe it’s just so highly rated because it’s the gateway to a lot of things like jungle treks and the tiger kingdom which are outside of the main city. 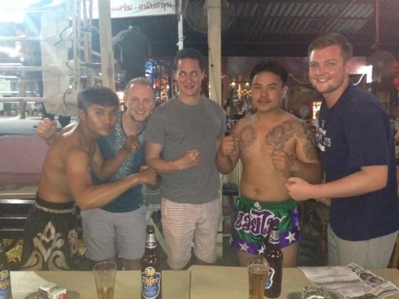 One of the few things I’ve found to do in Chiang Mai.

Maybe I came into it with my expectations too high. I class myself as something of a city boy, despite being from a small town. I’ve always felt more comfortable being and living in a bustling city and can’t see myself settling in a small town for quite a long time. Both times I’ve arrived in Chiang Mai it’s been after a crazy visit to Bangkok, so maybe the comedown from being in the capital has contributed to me not looking so favourably on Chiang Mai. For what it’s worth; I know many people who’ve hated Bangkok but loved Chiang Mai.

This post wasn’t meant as a complete slating of Chiang Mai; I’m just genuinely curious to know why it’s so highly thought of on the backpacker circuit. Am I missing something? Or is it just not my scene? Answers on a postcard please…

10 responses to “Why I Don’t Love Chiang Mai”