After two visits to Luang Prabang broken up by a short, food poisoning riddled stay in Vang Vieng, me and my newly reacquainted university mate Mark (or Norm, to those who know him) decided to head to Vientiane, the capital of Laos.

We had heard mainly negative things about Vientiane. Many people had told us that one night was enough and even then we’d be bored out of our arses. Norm, however, needed to head to the Chinese embassy to sort out a visa so he would need to stay there for around four or five days.

Being the man of the people that I am, I decided to stay a few more days and we soon discovered that Vientiane really isn’t as bad as people say…

Fair play, we did all our sightseeing within a few hours on the first day but it was still enough to keep us busy. The blistering heat made it feel like a very long, tiresome day which needed to be rewarded with a Beerlao, so it was a day well spent.

I’ve mentioned before how I’m pretty “templed out”. Sadly, if there’s one thing Vientiane isn’t lacking, it’s temples so we were spoilt for choice when it came to those! Thankfully, there were a number of other things to see which weren’t temples though and we had a quick look at the Presidential Palace before heading towards the Patuxai war memorial. This was an impressive French inspired structure which was remarkably similar to Paris’ Arc De Triomphe, so we grabbed a few photos there and moved on. 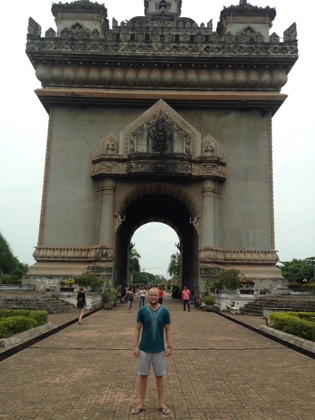 Not the Arc De Triomphe. Honest.

We soon found ourselves at Pha That Luang, a golden Buddhist stupa which was really impressive on the eye. Next door there was a temple with a small free art gallery, so we paid that a quick visit too.

You may not know it (I didn’t), but Laos is apparently the most bombed country on the planet thanks to the Vietnam war. Even now in 2014, there are still thousands of unexploded bombs around the country which sadly maim, or even worse kill, numerous Laotians every year.

The COPE hospital is dedicated to providing those fortunate to survive these accidents with prosthetic limbs in order to help them live as normal a life as possible. The hospital has a free visitor centre which is run on donations, so we paid it a visit and were truly humbled by how fortunate we are coming from England without such threats.

Perhaps the most eye opening was the case study of Hamm, a nine year-old boy who was killed by bombs whilst searching for scrap metal. We watched an interview on DVD with his parents which was particularly hard hitting and certainly not for the faint hearted. Again, I couldn’t help but think how lucky we are.

On a more light hearted note, you may remember that I ticked off an item of my bucket list recently by watching a game of football in Chiang Mai, and after my visit to Vientiane I can probably claim to be something of an expert in Asian football!

A random stroll towards the local stadium saw us sat with the local ultras (about 20 girls with pom poms and drums) watching a university football competition. Sadly, we only saw about 20 minutes of one match, partly due to the blistering heat and partly due to the fact that there’s only so many open goals you can watch get missed without bursting out laughing in front of the players’ friends and family.

On the Sunday, we paid a visit to the Carlsberg Arena to watch the last game of the Premiership season. Being a Liverpool fan, Norm took the opportunity to celebrate Liverpool almost winning the title by getting rather intoxicated. I’ll let the video below do the talking.

After this, we were asked to play head tennis on stage in front of what must have been at least 1000 Laotians. I’ve never felt like more of a circus animal in all of my life. The Laotian MC was talking over the microphone whilst we played to rapturous laughter from the audience, so I can only assume what he was saying wasn’t particularly complimentary. 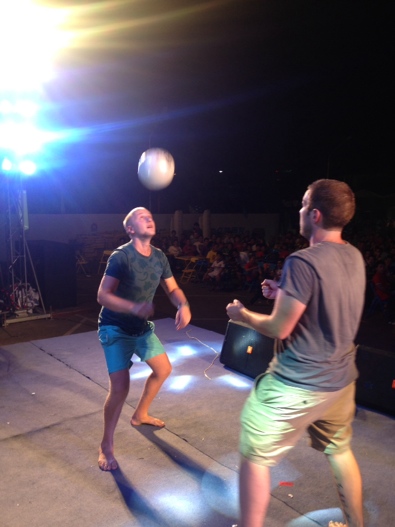 Putting on a show for the locals.

A good hostel can really make a difference no matter where you are, and whilst Vientiane Backpackers was hardly a social hotspot, we made the most of it and enjoyed sitting around not doing a great deal.

We even started inventing back stories for our fellow backpackers. Particularly amusing to us were a couple of Korean blokes who we christened Del Boy and Rodney – don’t ask why. It did transpire however, that Del Boy (or Mr Tong as he preferred to be known) was indeed a businessman, so maybe I’m a better judge of character than I give myself credit for!

After five nights in Vientiane, and four more than initially planned, it was time to move on. However I can safely say that it’s not always where you are, but who you’re with which can help you from an opinion of a place. All I’ll say about Vientiane is: don’t knock it til you’ve tried it!

2 responses to “Vientiane: Not As Boring As People Say”