Colombo: it’s been a blast.

As I write this, I’m sprawled out on a double bed in my private room – the first for over three months. I’m hungover, tired, and stuffed from the mouthwatering but blow-your-head-off-spicy curry that I’ve just devoured for breakfast and you know what? I couldn’t be happier!

I pondered recently on whether it would take me some time to get back into the swing of the backpacking life. Not only that, but with my first stop being Sri Lanka I also contemplated whether the cultural differences would take some getting used to. To my surprise, transitioning from the incredible well-organised way of life in Singapore to the (at times) organised chaos that is the capital of Sri Lanka has been fairly straightforward. 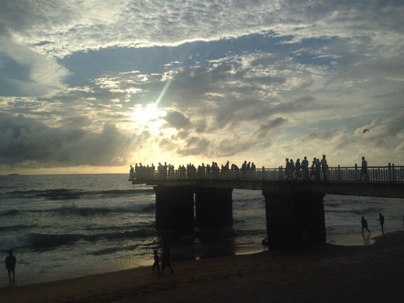 Galle Face Green – the place to be for Sri Lankan sunsets!

Don’t get me wrong – there are some tough aspects. None more so than when you want to cross the road. Being transported into a real life game of Frogger (look it up) from a place where you can get fined simply for crossing the road at the wrong time takes some getting used to. It can also be tough at times trying to figure out who is offering you genuine advice and who is trying to sell you a trip. My favourite conversation so far went a little like this…

“Hey! You’re white! I’m black!”
“Ermmmm…Ha! Yeah…”
“Maybe after one week here you’ll be like me! By the way, there’s a special festival in the city starting at 1pm. If you walk you won’t get there, but I can drive you!”

It was 1.50pm. We politely declined. On the whole though, I must say I’ve found Sri Lankan people to be very welcoming and charming. A theme I hope will continue throughout my trip.

The highlight of Colombo came just after we sadly missed out on the ‘special festival’. We (my friend Kat and I) decided to get a taste of the ‘real’ Colombo by heading to Pettah Market. On the way there we saw a much bigger queue than you would expect leading to a guy who had a box of hose nozzles. These must be something of a rare commodity in Colombo – I’m preparing my pitch for Peter Jones and Duncan Bannatyne as we speak.

We finally reached the market and I couldn’t wait to test out my new toy – my Go Pro! I’ll let the video do the talking…

I’ll leave you with a rather funny story about how my aforementioned hangover came to be.

We decided that, seeing as neither of us have done much drinking over the past few months, we’d have a bit of a blow out last night. After a few beers (or Long Island Ice Teas…) at the Galle Face Hotel – where the concierge tried selling us a taxi ride to Kandy – we headed to the In On The Green pub next door where it was quiz night. 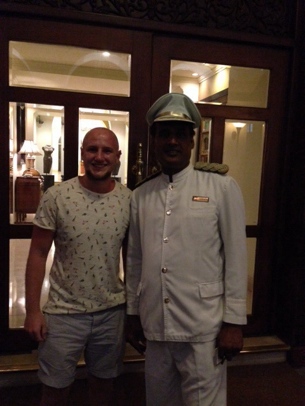 Despite struggling through the majority of the quiz and fully expecting to finish dead last, we somehow ended up third (I won’t be demanding a recount) and received two jugs of lager for our troubles. Added to the drinks we’d already consumed, I believe the technical term for our intake was now “a skinful”. At this point, we did the natural thing and left in search of a karaoke bar.

Unsurprisingly, the tuk tuk driver we flagged down informed us that the karaoke bar we wanted to go to was sadly closed (of course it was) but…fear not…he knew of another karaoke bar that was closer! Gosh, wasn’t that lucky?

It’s worth noting that at this point, the story may not be 100% accurate due to our intoxication. Anyway, he dropped us off and escorted us inside what looked like a derelict shopping centre where we were told that ladies get in free but I would have to part with 1000 rupees (less than a fiver) to get in. Excited at the promise of karaoke; I didn’t think twice.

We got into the bar and – to our dismay – there wasn’t a screen or microphone in sight! We’d been had off! What’s worse, there were a plethora of “dancing girls” who were unsurprisingly receiving lots of attention from the largely male clientele. We weren’t exactly sure what type of place we had been taken to, but we decided not to hang around to find out, as I finished my drink and we made a swift exit.

It all went downhill after the quiz…

The end was in sight – I could feel my bed, but there was to be one more twist to the night. As we were leaving the bar/club/brothel we were approached by two familiar faces. It took a few moments to realise what was going on, but when they produced our bar tab from the In On The Green we quickly realised – we’d left without paying up! These poor fellas had obviously been sent to collect our money and been made to wait outside in the rain for us to leave. Thankfully they seemed very understanding of our genuine forgetfulness.

So that’s Colombo so far. It’s been great fun, and I’ve really felt a lot of love for the city and its people. We are headed for Kandy tomorrow with the hope of just as much fun as we’ve had here – minus the drunken foray into the city’s seedier joints!

5 responses to “The Night We Ran Away From A Bar Tab And Probably Ended Up In A Brothel (P.S. Colombo Is Lovely…Really!)”