The final leg of my Sri Lanka trip sees me head around the South Coast before finally making my way up to Negombo for a flight to Bangkok next week.

After a week of relaxing, trying new things and losing expensive cameras in Arugam Bay, Mirissa was next up on my itinerary. Famous for its beach and whale watching opportunities, I initially arrived in Mirissa expecting a hub of activity so was rather surprised to discover there’s not much more to it than a road full of guesthouses and a number of restaurants along the beach. Great for couples and honeymooners – not quite as good for the solo traveller. I’ve found this to be the case for a lot of places in Sri Lanka, but I would still recommend it to anyone’s who doesn’t mind their own company! 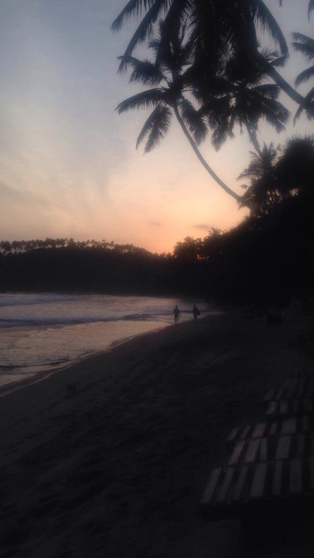 A stunning sunset from the beach in Mirissa.

Thankfully, my friends Gavin and Lucy who I met in Arugam were in Mirissa for the duration of my stay, so I managed to get a great deal of socialising in as well as personal time. This made my stay much more enjoyable, and they’d already done their research and hired scooters to scope out the area which was a bonus!

Had I not met my friends I’d never have heard of this place, which would have been a crying shame as it turned out to be as great laugh – if not a little nerve wracking at times.

Hidden away in the middle of nowhere, around a half hour ride outside of Mirissa is a bloke’s house where he keeps more snakes than any human would ever need. Not that a human ever really needs a snake, but I suppose one isn’t too bad to satisfy your curiosity.

This fella, however, takes it to the next level. He has absolutely everything from pythons to cobras (about three different types) as well as just about every other snake you’ve never heard of. In case you were wondering, my knowledge of snakes is limited to pythons and cobras. From what I could gather, he takes them in and looks after them when farmers would be probably more likely to take the option of killing them. 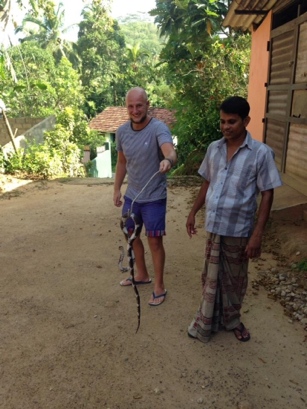 I felt a lot better about this after hearing the guy’s speciality.

He’s also a trained doctor who specialises in natural herbal antidotes for snake bites, which I’m sure you’ll agree is quite convenient. I’m still not sure he should be risking it quite as much as he does with these snakes, but I guess if you don’t believe in your own product then who will?

For 800 rupees he gave us an hour long show during which he presented us a number of snakes including black and white cobras, a few pythons and many more. There’s that extensive knowledge of snakes cropping up again. He also let us hold and place the non-poisonous snakes around our necks which, as you can see by my reaction, was an absolute pleasure…

The main event of any trip to Mirissa is a trip out on one of the many whale watching boats. It’s clear to see how much this contributes to the economy in Mirissa, as you can’t have a meal in peace or buy a bottle of water without someone trying to flog you a ticket.

When my 6am alarm went off (I’m getting used to those) I awoke to the sound of rain, thunder and lightning – all the things you want for a trip out to the middle of the ocean!

Getting on to the boat I was greeted with a cup of coffee and a seasickness tablet which I, rather foolishly, turned down. I guess when the people who do this trip every day are offering you them, you should probably follow their advice. Lesson learnt.

Within 20 minutes of leaving the shore, around half of the 30+ people on board – myself included – were starting to feel the effects of the choppy sea. One by one people started to turn paler, put their heads down and throw up into the plastic bags provided. Great start to as day out, I’m sure you’ll agree.

After what felt like a day (but was probably closer to 45 minutes) the boat slowed down and we were invited to the top deck as we closed in on a whale. Again, around only half of the people on board (myself included, again) managed to make it up to the top deck where the rain and wind got even heavier. For a change I’d actually been rather sensible and brought my rain coat along, but it was still freezing for me so I can’t imagine how the people in vests and shorts were feeling.

It probably took us around half an hour but we eventually saw what we came to see – a massive blue whale! It was short – around a minute, if that – but very sweet and after that I think pretty much everyone on board was happy to be heading back to shore after getting their photos and videos!

On the way back we were ‘treated’ to our breakfast – an egg sandwich! I honestly couldn’t think of anything worse to serve up to a boat full of queasy people, but by that point I was absolutely starving and would have eaten anything! I think more sandwiches were left untouched than eaten, as people opted for plastic bags to empty their stomachs instead of filling them.

I’m not entirely sure I sold that one too well, did I?

3 responses to “Mirissa: Tales of Sun, Sand, Seasickness and Snakes”