Welcome to part three of our Vietnam road trip! If you’ve missed either of the first two posts, you can catch up with them here and here.

We arrived in Mui Ne via the coastal road described in the last post. Sadly, our time here was something of a write off as the manflu that had begun to surface in Vung Tau took a hold of me throughout our stay. In fact, things got so bad that we actually had to spend a third night here as I couldn’t handle a day’s driving feeling how I did!

This meant that we missed out on the Halloween night out which, I’m told, is a pretty big deal in Vietnam. We were also informed by one of our dorm mates – who was very much a part of the ‘go hard or go home because YOLO’ army – that alongside New Year’s Eve, Halloween is one of only two nights of the year when you can really party hard. I’m not sure what’s wrong with birthdays, bank holidays, or indeed any given Friday or Saturday night, but each to their own.

On our final day though we did manage to do the one thing that Mui Ne is known for as we visited the famous sand dunes. Both James and I aren’t the biggest fans of sand, so it did seem like a bit of a drag but we figured we’d best check it out as going to Mui Ne and not seeing the sand dunes would be like going to Paris and not seeing the Eiffel Tower.

In the end, we were really glad we did the tour – especially for the equivalent of about a fiver. We saw a few other things but the main events were the white and red sand dunes which were pretty spectacular. We had the option of renting quads at the white dunes but decided against it after hearing horror stories of them breaking down and tourists being charged millions of dong (probably only about 60 quid!) as a result. A couple in our group did rent them and had no problems, so maybe they are alright after all.

The white dunes seemed to go on for miles and were amazing to look at, but the highlight of the day was undoubtedly the sunset at the red dunes. I’ll let the picture do the talking. All in all, it was a great end to a fairly crappy stay in Mui Ne.

Next stop on our tour was the highlands town of Da Lat. I visited Da Lat on my last Vietnam trip in March and enjoyed the place. Due to its location in the hills, the climate is somewhat cooler than the places we’d been already – a little more like what we’re used to! We’d been told that the road between Mui Ne was an absolute stunner, so we were quite looking forward to this one.

The journey started in somewhat familiar fashion, as within a minute of leaving the hostel James’ key fell out of the bike again. Standard procedure by that point, but still rather irritating. Once we’d got that sorted (back in the bike) and had made our way out of Phan Thiet (where everyone seems to be an idiot on the road), we could start to enjoy the ride.

And enjoy it we did.

Any excuse for a panorama!

What followed were miles and miles of winding mountain roads, each one providing as stunning a view as the last, which eventually took us up amongst the clouds and into the ever so slightly colder air. Once the long and winding road stopped, we found ourselves in a small town called Di Linh where we stopped for a spot of lunch.

The locals must have thought the cabaret had turned up, as they were all in stitches as I tried to order myself a pho – much to the confusion of the husband and wife running the gaff. In the end, they called out their young son who was, at a guess, no older than 10 years old and he managed to make sense of what I was after and we cracked on with lunch. 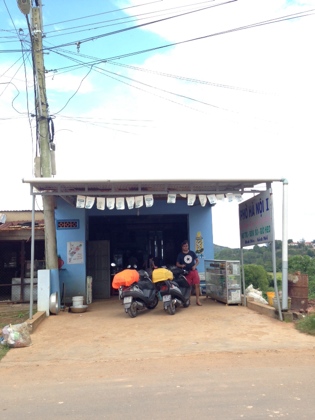 After Di Linh, things sadly weren’t as enjoyable as the earlier stint. The roads were rammed with mental drivers in bigger vehicles than us, it started to lash it down, our arses were anaesthetic-style numb and to top it all off; James’ kick start pedal kept falling down and dragging along the floor so we needed an impromptu stop at the mechanics. Finding a mechanics was hard. Finding a reputable mechanic was even harder.

It’s odd; on a stretch of road in a country so populated with bikes we struggled to find a decent garage, yet had we wanted to photocopy a document we’d have been spoilt for choice. Honestly – I’ve never seen so many signs for photocopying in my life as I did on this stretch of road. Truly bizarre.

In the end, we found a Yamaha garage where they were kind enough to fix the problem for free, which was a bonus! After that it was a fairly stressless remainder of the journey to Da Lat where we were greeted by our hostel owner who came out to meet us singing Dancing Queen by Abba. It’s not quite the Bee Gees, but you couldn’t knock him for trying.

*Due to Apple products being shit technical issues, the video of this trip is not available right now. It may or may not be uploaded in the future. – UPDATE AUGUST 2018: It’s probably not happening.

Click here for part four of our journey: Da Lat to Nha Trang!