If you missed any previous parts of our trip, you can find them here.

Since arriving in Vietnam, the aim had always been to be in Hoi An for the middle of November. There were a couple of reasons for this. Should we be in Hoi An for around this time, it would show that we were well on schedule to make it to Hanoi before our visas ran out which – I’m sure you’ll agree – is a good thing. I don’t know a great deal about Vietnamese detention centres, but I can’t imagine they’re furnished with gourmet restaurants and a Playstation 4.

We (I) also wanted to be in Hoi An for November 12th as it would be my 25th birthday. Yes, I know the slap head and scruffy beard make me look older but believe it or not, there was a time when I was one of the more baby-faced members of our group. Just look at my passport photo.

Gladly, we arrived a couple of days before my birthday which was a relief. I’ve got nothing major against Quy Nhon, Kontum or Kham Duc, but they weren’t exactly the most lively of places. The presence of ‘Why Not Bar’ in Hoi An – where you can drink as much rum, whisky and vodka as you like for 100,000 dong (less than £3) – may have swayed my decision. 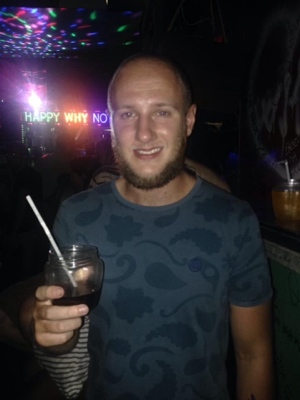 Looking well at the ‘all you can drink’ bar!

My previous visit to Hoi An had left me with a bit of ‘Chiang Mai syndrome‘ in the sense that I didn’t mind the place, but didn’t quite love it as much as everyone else seems to. This time round, I think I got more in to it and can see how people get stuck there for a week or more. Although there isn’t a great deal of stuff to do, it can be really nice to just sit down by the river in the Old Town with a coffee or a few 4,000 dong (11p) local beers and watch the world go by. Also, if you want to get a suit, dress, a pair of shoes or pretty much any piece of clothing tailored, then Hoi An is the place to be.

As well as a very boozy night on my birthday, we also took our bikes out for the day to the Hai Van Pass. We weren’t planning on visiting Hue, so we had to do this as a day trip. The road has often been referred to as one of the best in the world and the views really were stunning, although I probably preferred the drive from Da Lat to Nha Trang. Sadly, the videos I took didn’t really turn do it any sort of justice at all, so this picture will have to do. 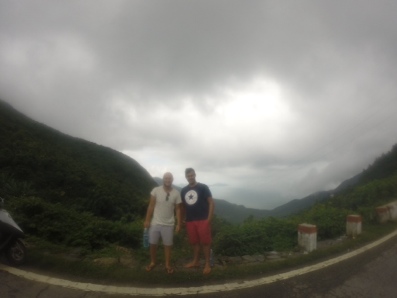 Nothing I caught on camera does the Hai Van Pass justice.

As we had decided to skip Hue, the main objective of the rest of our trip was to make our way up to Hanoi. This meant a long and laborious journey from Hoi An to Khe Sanh which, after some bad news from the SYM garage a few days previously, wasn’t particularly welcome. I can’t be arsed to write it all out, so you can hear about it in the video below.

This particular journey was largely along winding mountain roads which, as I’ve found myself saying a lot, were really beautiful. Sadly, when you’ve got a half broken bike on your mind and torrential rain blasting in your face, it’s quite hard to appreciate it as much as you should. I’m actually convinced that the slight cold I was carrying for a few days after was a direct result of this drive.

As is often the case, the journey didn’t pass without incident. James’ pesky kickstart stand was playing up quite a lot, and mine decided to join in the fun too. Thankfully, James was his usual resourceful self and found his own way of sorting it out. It wasn’t the most orthodox method, but it’s amazing how effective a bungee cord and a few smacks of a helmet can be.

It’s not an expert job, but it’ll do.

The worst/most eventful parts of this journey happened within minutes of each other though, as we reached the halfway point. You may remember from our drive to Quy Nhon that we received a shock when we discovered that neither of our bikes had headlights. This came back to bite us (me) again when we entered a tunnel up in the hills. The tunnel was fairly long, and we could just about make out the exit at the other side but between us and that, it was pitch black. Despite going in what I thought was a straight line, I somehow managed to trap my leg between my bike and the wall of the tunnel. I didn’t have much of a battle scar to show for it, but it was certainly a stinger.

When we exited the tunnel I decided to pull over to check the damage to my foot and bike. We were on something of a slight incline at this point, and I carefully parked up when all of a sudden I heard a huge crash. I turned around to see James’ bike, bag and just about everything else on the floor. Thankfully, he was off the bike when it happened, but this didn’t stop him throwing the greatest tantrum of the trip. You’ll be pleased to hear I managed to catch a small part of it on video, as you can see at the end of this post.

After a while we dusted ourselves down, stopped feeling sorry for ourselves (a bit) and powered through the rain and the seemingly never ending roads. We eventually reached the small town of Khe Sanh at around 5pm after a 7.30am departure. We were absolutely shattered and set about finding a hotel which didn’t resemble the one out of The Shining, which was easier said than done. At this point, we were just happy to put our feet up.

Click here for the next part of our journey: Khe Sanh to Phong Nha!