You can find the previous 11 instalments here.

We arrived in Thanh Hoa in the dark. It was late, we were tired and – as you may remember – we had no headlights. A quick scout on Wikitravel suggested a few hotels, so we just plumped for the first one as driving around a dark city with no lights didn’t really appeal to us.

We headed out for some ‘com ga’ (chicken and rice), grabbed the Oreos we’d been craving for days and called it a night ready for the final leg in the morning.

Well, this was it. We’d set off from Ho Chi Minh just over three weeks earlier, and the finish line was even more in sight than ever before. We had about 150 kilometres to go, and it all seemed like it’d be plain sailing on a straight road.

However, that just wasn’t to be.

My bike took a good five minutes to get started and when it did, it sounded even less convincing than it had done on the whole journey. By this point, I was absolutely terrified of not just stopping, but even going too slow because it sounded like it could cut out at any given moment. I found myself calculating how many miles we had left instead of kilometres, purely because it was a smaller number.

It was absolutely bloody freezing too – by far the coldest we’d been on the journey. In my head, the final leg was going to be nice and easy, with a sense of triumph and accomplishment. I half expected the ticker tape to be flying around when we passed the “Welcome to Hanoi” sign. In reality, it was cold, damp and we were downright bloody miserable. Things really couldn’t get any worse, could they? 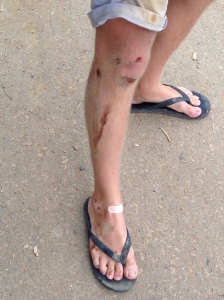 Just as I thought it couldn’t get much worse…

We’d covered about 50 kilometres by this point when we approached a quiet, sandy junction. Now, I’d got used to the Vietnamese roads and my policy of expecting everyone to be a dickhead and preparing for the worst had served me well up until this point. Here though, I let my guard down and didn’t see the guy seemingly turning without indicating until the very last minute so I slammed the brakes on with all my force.

As it happens, he wasn’t turning – just decided that the wrong side of the road was more appealing. The next thing I know, I’m in the middle of the road with the bike on top of my leg. Typical. We’d come all this way without even so much as a sniff of an accident (apart from the pothole incident earlier on in the journey…) and just when Hanoi is in touching distance, I come off! The only positive is that it could have been a hell of a lot worse.

As a side note, I now see why people think the Brits are ‘too polite’. There I am, in the middle of the Ho Chi Minh trail with a bloody scooter trapping my leg, and what do I do? Turn round to James and say, “James, could you give me a hand here please mate?”. Unbelievable.

After a quick stop to clean my wounds up with a few bottles of water we were well on the way again. The journey passed without incident (let’s face it, what else could have happened?!) and we reached Hanoi to be greeted with even worse traffic than in Ho Chi Minh. I’d heard it didn’t get any worse than Ho Chi Minh, and honestly didn’t see how it possibly could, but Hanoi really was next level.

I’ve never seen so many bikes weaving in and out of buses, beeping horns at just about anything they could, driving down the wrong side of the road and even on the pavement if it suits them (see video). Add a ton of one-way streets, plus two British lads who don’t know the city and you have a recipe for panic.

Thankfully, we reached our hostel and final destination without any more bumps and bruises and once we’d parked up, we vowed not to ride a bike or a scooter again for a very long time. The next day, we sent the scooters back down to Ho Chi Minh where Jon at Tigit bought them back off us for $150 less than what we paid. We figured it out that we essentially paid £90 to rent them for the three and a half weeks – not bad eh? Especially when you consider the state mine was sent back in. I was honestly not expecting a penny.

To anyone who is thinking about doing this trip, I only have two words for you: do it! I can honestly say that – despite the tiring and occasionally stressful days (not to mention the initial fear factor) – it was hands down one of the best experiences of my life. The rest of my travels really do have a lot to live up to.