For reasons unknown to me, China has always been firmly near the top of my list when it comes to countries I really want to visit.

I’m not sure whether it’s the food, the culture or the sights that have appealed to me, but either way it’s somewhere that I’ve always wanted to go. The fact that I’m keen to commit to a year of teaching in 2015 is also another biggie. The demand for English teachers in China is staggering, so it’s something I’m giving some serious thought to. Before doing that though, I was keen to visit to see if the completely different way of life is something I could handle.

After completing our Vietnam bike trip, the plan was originally to apply for Chinese visas in Hanoi then get a train across the border to Nanning where our Chinese adventure would commence. However, we’d heard mixed things about the success rate of obtaining a tourist visa for China in Hanoi due to the ever-changing relations between the two countries. With this in mind, we decided to look in to alternative options.

In the end, we came to the decision that it would make more sense to fly to Hong Kong and obtain our visas there before crossing the Chinese border at Shenzhen. We’d heard about a visa agency called Forever Bright, who offer an incredibly quick and efficient visa service with most of the legwork done by them. We were happy to pay a little extra for their service, as they fast-tracked our applications and all we had to do was fill out a few forms.

As I’m beginning to look less and less like my passport photo, I thought I may be pushing it by applying for a double entry visa at the Chinese Embassy so Forever Bright’s ‘no questions asked’ service was ideal for me. They got us a pair of tourist visas (one single and one double entry) with absolutely no hassle at all. We submitted our application at 9am on Monday, and we had our visas by midday Tuesday – easy as that! I believe they actually offer a same day service on single entry visas providing you get there before about 10am, but don’t quote me on that.

With a day or two to burn we decided to see a bit of Hong Kong. There was talk of Disneyland as James and I are big kids at heart, but in the end we settled for a cable car up to the Big Buddha at Ngong Ping and a bit of wandering around. 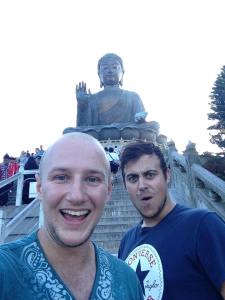 Buddha selfies while waiting on our visa!

I say “a bit of wandering round”, but any mention of us walking in Hong Kong can’t go without me telling the story of the walk on our last night. A friend we met in Thailand had told us about the Bubba Gump Shrimp restaurant that he ate at in Tokyo and, to our pleasure, we found out that there was one in Hong Kong so we decided to check it out.

The restaurant was in a building called ‘The Peak’, which should have been the first clue that it was fairly high up. The fact that there is also a special tramline dedicated to reaching The Peak was another. However, the size of the queue meant that we decided to walk. After all my trusty City Maps 2 Go app said it was only a kilometre and a half away – how long could it really take?

Now, City Maps 2 Go has been an absolute godsend for me since I came travelling. It’s got me through pretty much every city and even the length of Vietnam with no hiccups. If anything, I’ve become too reliant on it. One downside to the map is that it doesn’t show the terrain or the inclines on a map – it literally just shows where things are and how far away they are. As the name may suggest, The Peak was up a pretty big hill overlooking Hong Kong. The skyscrapers we were walking past soon turned in to small dots in the distance, as it took us around two hours to walk what was supposed to be around two kilometres. No prizes for guessing how we got back down.

A well earned beer after our hike up to The Peak!

We thought Hong Kong would also be a good excuse for a detox as the price of alcohol was much higher than we were used to, and apart from a few drinks with a friend I met in Singapore and a celebratory beer or two when Lewis Hamilton won the F1 championship, we succeeded on that front.

Hong Kong as a place can be expensive if you make it so, and it’s safe to say I did as I picked myself up a brand new shiny MacBook. My iPad is on the way out and it would cost around £150 to repair it according to the Apple Store, so I figured I may as well buy a MacBook. Makes sense, right?

All in all, a productive few days were had in Hong Kong and we were suitably refreshed and ready to cross the order in to the chaos that is China. I couldn’t wait!