Since I started compiling my bucket list a few years ago, visiting China and more specifically The Great Wall has been one of my priorities. You could say I was more than a little excited about this one.

We were faced with a number of options when it came to visiting the wall. We’d heard that you could do it yourself and save considerable amounts of money – an approach that had served us very well when it came to the Terracotta Warriors in Xi’an. The problem with this was that the Great Wall is a fair distance from the centre of Beijing and therefore the chance of us getting on the wrong bus and ending up in the middle of nowhere where no one speaks English were fairly high.

We decided it would be much easier to do a tour and started to look around for one. This was fairly easy as near enough every hostel and travel agent in the city offers tours to the Great Wall. We had been told to avoid Badaling at all costs, as it is apparently jam-packed all year round and a fairly unenjoyable experience. If anyone has seen An Idiot Abroad, I’m guessing this is where Karl Pilkington went.

We’d been told very good things about Leo Hostel’s ‘secret Great Wall’ tour, where they apparently take you to a section of the wall that is barely touched by tourism. Sadly, this wasn’t running on the day we wanted to go, so we settled for the Mutianyu section of the wall instead. The fact that you can toboggan down the mountain from Mutianyu may or may not have swayed our decision. 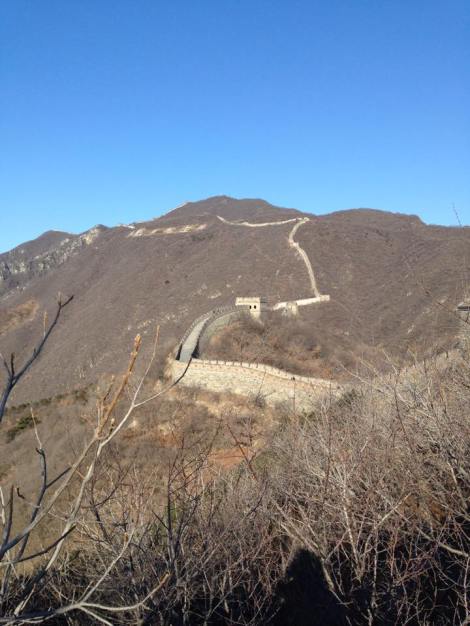 Our first view up close of the wall!

A 6.50am departure awaited us so I picked up a bag of dumplings from a street vendor for the journey and away we went. I’m not entirely sure that minced pork dumplings are the most nutritious thing to eat in the morning but the street vendors around our hostel seemed to do things a little differently, opting to flog dumplings in the morning and fruit at night. Each to their own.

After a drive that felt a little longer than it probably was (Beijing is big), we arrived at the wall ready to start the experience. We deliberated hiking up the mountain, but as we only had three hours to explore we decided against it and bought a return cable car ticket for 100 yuan. In hindsight, this was an excellent move and I’m sure our legs wouldn’t have thanked us had we decided to hike a mountain before we even got to the wall.

A short cable car ride later and we were at the peak of the mountain. We were immediately greeted with the sight of the wall stretching for as far as the eye could see. Even though we knew the wall was approximately 6,000 kilometres long it still took my breath away to see it in person.

We had a couple of options; namely to walk left or right. Right would take us to the point where you can toboggan down, and left would take us higher in to the mountain and to the point where we could see some unrestored parts of the wall. In the end, we settled on the latter. As awesome as it would have been to toboggan down the mountain, we figured there will be more opportunities in life to toboggan whereas it’s not every day you’re at the Great Wall of China!

It’s safe to say we underestimated just how tiring it would be, as it really didn’t look like we’d walked far before we had to stop for breath. I’m guessing the combination of thin air and thousands of steps may have played a part in this.

These steps were almost the death of me!

After a while we reached what we thought would be the end of our trail as there was a sign in the path saying that tourists weren’t allowed to go any further. A few minutes of consideration, coupled with seeing a load of tourists ignoring the sign brought us to the conclusion that the walk must go on.

It was a good thing we decided to go on, as this was perhaps the best part of the wall. It was a little less restored at first and eventually we found ourselves at an old, completely unrestored section. It’s easy to see why they say that no tourists are allowed, as there were a few parts that needed to be approached cautiously, but it was great to see the wall in its purest form. The presence of an old man selling souvenirs told us that the sign isn’t regularly adhered to or enforced.

With time running out and the wall getting more and more unwalkable with every step, we guessed it was time to start our descent. If anything, going down was harder than making our way up, as the steep steps were a real strain on the knees and the back. Maybe I’m getting old. 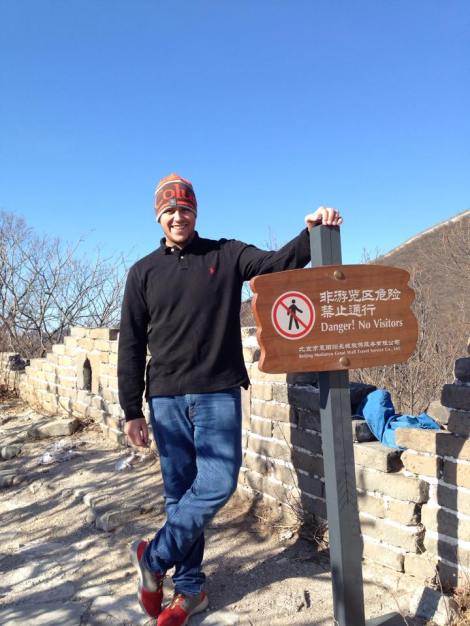 James breaking all sorts of rules.

Our lunch was included in the price of our ticket, and we’d certainly worked up an appetite. After devouring everything that was put in front of us and washed it down with a Tsingtao beer it was time to head back to the city. I’ve said it a lot on this trip, but this really will take some beating. There are no prizes for guessing that visiting the Summer Palace the next day was something of an anti-climax and I dare say that just about everything else I see and do will have a hell of a lot to live up to.