For many years now, one of my long-term bucket list items has been to ride the Trans-Siberian railway.

It’s an ambition that has surprised a few people. Why on earth would I want to spend so much time on trains from Beijing to Moscow when I could fly between the two places in a few hours? To ride from the capital of China to the capital of Russia non-stop on the train takes around seven days.

Let that sink in for a moment.

And that’s going non-stop. Start to finish. No stopovers in different cities. Just six solid nights on a train. Sure you can get out for a leg stretch here and there, and there will be times where you have a few hours to kill while you change trains and cross borders, but predominantly, you’ll be spending the best part of a week on a train. 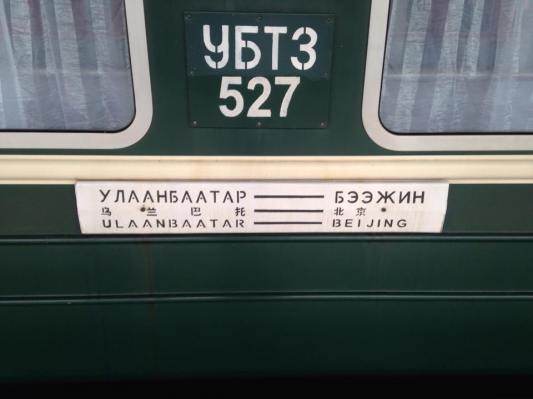 Leg one of the journey!

I like trains and I make no secret of the fact that I’m a bit of a snob when it comes to public transport. In fact, you’d be much more likely to see me walking anywhere than catching a bus at home. When it comes to trains though, I really don’t mind spending time on them. Naturally, the shockingly bad Northern Rail trains are an exception – if you can even call them trains. Even for me though, a week on a train is a bit of a push.

Thankfully time is something I have on my side so, instead of flying home in March, I decided to start my journey a little early and travel the first leg overland from Beijing to Moscow – via Mongolia.

I arrived in Beijing in something of a hurry. As soon as I was granted my Russian visa in Hong Kong (more on that at a later date), I booked a flight to Beijing for the following day and a train ticket to Ulaanbaatar – the Mongolian capital – for the morning after that.

What I hadn’t considered, however, was the fact that I was arriving in Beijing on a Friday evening and getting the train out on a Saturday morning. This wouldn’t be an issue with most forms of transport but the Trans-Siberian (or Trans-Mongolian for this leg, if we’re being pedantic) railway isn’t just any form of transport and – in a slightly old fashioned manner – requires a hard ticket to be issued.

As is the case with most places in the world, the ticket issuing office closed on Friday and wasn’t due to reopen until Monday. Thankfully, a bit of common sense prevailed and they left the ticket in a safety deposit box in the lobby of their building. As soon as I dropped my bags at my hostel I was digging out my big winter coat that I hadn’t worn since I was last in China and setting off on a wild goose chase in the dark with an incredibly poorly scaled map for company.

Thankfully, despite the map being close to no help at all in terms of knowing how far I was from the building, it indicated that I needed to turn right at McDonald’s and the building would be somewhere on the left at some point. After a tense 10 minutes of my heart sinking every time I saw an office block on the left locked up for the weekend, I eventually found the Beijing Business World.

The lights were off.

“Bollocks!”, I said at a volume a little too loud for a public setting. For the first time in history, I was glad that not many people speak English in China.

Then suddenly, the door was thrown open and a couple of removal guys made their way out with a filing cabinet – result! To be honest, for all I know they could have been robbing the joint but at that point I was past caring. I made my way inside, found the safety deposit box and, as promised, there were my tickets. I felt like jumping for joy. I made my way back to the hostel and settled down for an early night. Job done.

Well, this was it. The planning was over and, after a mad rush the previous night, it was time to start the adventure. I’d done the hard part, so now all I had to do was get on the train and enjoy the ride.

It all went nice and smoothly and I arrived in Ulaanbaatar without any stress whatsoever. 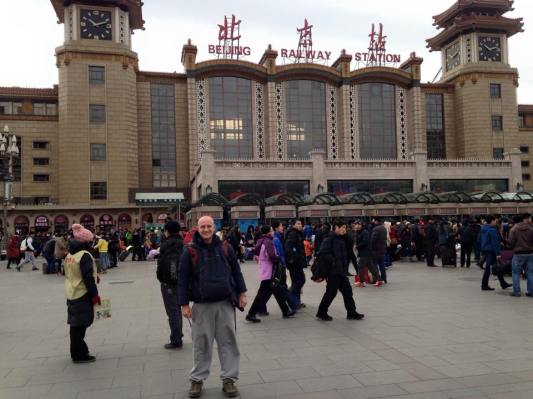 This smile would soon be wiped off my face!

I arrived at Beijing Railway Station with an hour to spare. I just needed to make a quick visit to the ATM, buy some snacks and I was away. Naturally, the first ATM I went to was out of order so I had to circle the entire station to find the others. No worries – I had plenty of time.

When I finally found the other ATMs, I breathed a sigh of relief and inserted my card. There’s something a little bit more stressful about using the ATM in another country. I’ve already lost one card in Laos and really can’t afford to have another swallowed up by the temperamental machines. There’s something even more stressful about using a temperamental ATM in a foreign country when you have a rather expensive train to catch. As you would expect, this particular machine didn’t fancy playing ball and decided to take my card and claim to be ‘processing’ for the best part of five minutes.

No matter how often and hard I pressed the ‘cancel’ button, it did nothing. I was completely stumped. My card was stuck in the machine; I had no money and time was ticking down. I must have been an absolute picture to the people queuing up behind me. Not for the first time in that 24 hour period I found myself swearing at a socially unacceptable level, whilst throwing in a kick at my backpack every now and then for good measure. Poor thing.

Suddenly, just as I was coming to terms with losing another card (and, quite frankly shitting my pants with worry), the card shot out of the ATM and all was good. Well, not exactly good, but certainly better. I didn’t fancy risking it again, so cobbled together 50 yuan in loose change (around a fiver), and decided to stock up on cheap food for the journey. No restaurant cart for me.

‘Spicy crispy sausage’ – as appetising as it sounds.

I left the shop with two cups of dried noodles, a pack of pre-cooked sausages, a bottle of coke and a bottle of water. I figured these were the best options, as water would be available on the train so I could heat up my noodles and also refill my bottles. Not just a pretty face, eh?

I made it to the train with 20 minutes to spare and settled down in my four-berth, second class compartment which I had all to myself. From what I could see, the difference between the second class soft and hard sleepers (apart from the cost) was minimal. Despite the name, the beds in the so-called ‘hard’ compartments were comfortable enough and maybe just a little narrower than the ‘soft’ compartments. In other words: you don’t get much more for your money. Go hard or go home…if you’re on a budget.

With a combination of Football Manager, the movies on my laptop, a book and the beautiful Chinese mountains, the journey passed fairly quickly. To my surprise there was actually a TV at the end of my bed, but it only had one channel called ‘Mongolbox’ – no prizes for guessing which language that was in. 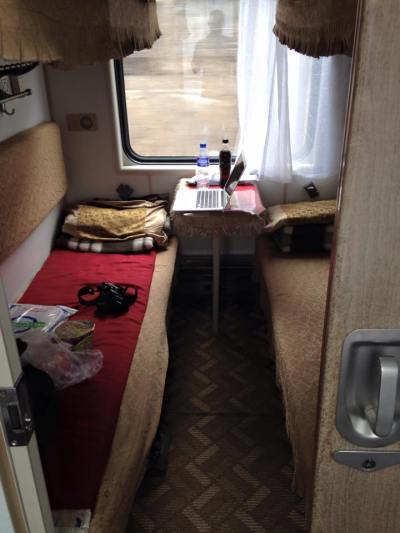 My home for the night!

Just as I was nodding off (at 9.30pm – it was a tough day), I was awoken by a member of staff who, I can safely say, won’t be winning any customer service awards any time soon. She launched a few pieces of paper at me, barked something in Mongolian and wandered off. I would have struggled with this at the best of times, but looking at a Chinese declaration form and trying to process Mongolian instructions whilst half asleep was a little too much for me. I went to the staff member’s compartment to try and make some sense of it, but she ‘shoo’ed’ me away with a gesture you might give to an unwelcome dog in your garden. I filled the Chinese forms in to the best of my ability – guessing mostly – and hoped it would suffice.

Much to my surprise, there were no problems with the forms. There were, however, the usual problems with my passport. It took three Chinese immigration officers to inspect the passport and decide that the boy in the photograph was indeed me with hair. The presence of three officers meant that I didn’t beat my record of four inspections set the last time I was in China, but I was just glad they were finally convinced it was me.

By this point, I had been on the train for around 12 hours. The train stopped at the border for a few hours to do something technical that I didn’t understand, so I decided to head out with a Russian guy from the train to grab some food with the 150 yuan I had since found in my bag.

One thing I hadn’t realised, however, was that once you were off the train you weren’t allowed back on until it was time to leave. There really wasn’t a great deal to see in the Chinese border town of Erlian, so this meant spending two hours hanging around in a freezing cold train station. By freezing – I mean way in to the minuses. Consider this a lesson learnt.

Hours to burn at the border = photo opportunity.

Once the train finally set off again, we only had around 15 minutes before another prolonged stop. This time at the Mongolian border where – surprise surprise – I was subjected to another long passport examination. Thankfully, it only took two people this time and we were on our way again before long. After a long day of stress, panic and inspections, I finally caught some sleep at 2am.

And sleep I did.

Eight hours of sleep, a few episodes of House and a lot of staring out of the window in to the vast, snowy Mongolian countryside later, the train finally rolled in to the concrete jungle that is Ulaanbaatar just after 2pm.

It hadn’t been a smooth journey in many senses, but the adventure was well and truly underway.

Click here for part two of my journey: Ulaanbaatar to Ulan Ude!

One response to “My Trans-Siberian Railway Adventure: Part One – Beijing to Ulaanbaatar”