They say time flies when you’re having fun, and I can barely believe I’ve been living in Tokyo for over a week now. It doesn’t sound like much, but I guess it means there’s only 51 more…

It’s been an absolute blast being back in Asia so far. I loved being back in England, and Rome was also pretty incredible, but as soon as I got back to Asia I felt like I was back home in a sense. Having spent so long here over the past 18 months or so, it just felt like I’d been away for a quick break.

At this point I feel I need to put something of a disclaimer on the post: if you’re looking for a nice, educated, cultural initial insight in to Tokyo then you may wish to stop reading right about now.

Still with me? Excellent!

As I’ve been in Japan just over a week and actually started training at work the day after I landed, I’ve not really had a chance to see much of Tokyo. I have however, like all self-respecting Englishmen, happened to stumble upon a couple of bars from time to time and sampled the local brew. When in Rome and all that.

One such occasion happened after our third day of training. As we were ever so kindly allowed Sunday (the next day) off, around 10 of us decided to head to a bar close-by and celebrate with a few drinks.

After couple of beers (including a free one from 7/11 – no idea why) and a random street festival (it is Asia after all…) we found ourselves in the place you only go when the night has reached a certain point: a karaoke bar.

Anyone who knows me fairly well will know that when I’m drunk, I can think of nothing I’d rather do more than drunkenly sing karaoke; this was an ideal end to the night. I’m always of the opinion that if you can get drunk and sing karaoke with new workmates and people still talk to you afterwards then you’re on to a winner; thankfully this was one of those occasions!

Despite the lack of Mambo No. 5 (amateurs), a fun night was had by all and we headed off downstairs to pay the bill and catch our respective trains home.

When presented with the bill we were given something of a shock. Bear in mind that the large majority of the group had been in Japan for a matter of days, and we still had absolutely no idea how much most things should cost.

People were digging as deep in to their pockets as they could, whilst others ran to the ATM to cover the rest of the bill, which we agreed to sort out the next time we met. Turns out karaoke booths can rack up quite a bill if you keep ignoring their ‘five minute warnings’. On the topic of which, I imagine ‘Four Minute Warning’ by Mark Owen would be quite a decent karaoke song. Tenuous, I know.

After the ever so slightly embarrassing bill situation, we had a slightly larger issue when we got to Iidabashi station and discovered that the last trains had already stopped and wouldn’t be resuming until 5am.

As there didn’t appear to be much to see in Iidabashi, myself and my new friend/workmate Sophie decided to jump on the last train bound for Shinjuku in the hope of there being a train running in our direction from there. Optimistic, I know.

We were greeted with the same response of nothing until 5am, so decided to make the most of it and discover one of Tokyo’s busiest areas. It was Saturday night, after all. 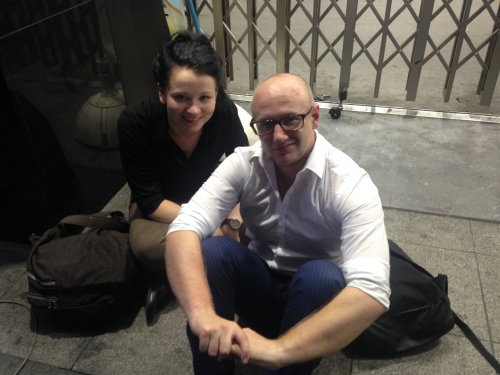 Stranded in Shinjuku – I could think of worse places.

This is where it gets particularly grim.

Strolling around Shinjuku was something of an eye opener. I’d heard it was a bustling place, and I wasn’t let down on that front. The amount of bars, clubs and strip joints we were continually hassled on behalf of was really quite something. When you consider we were both still in our work clothes, I’m not entirely sure what they were expecting. Then again…

Outside one establishment, however, was a man who clearly had also come straight from work. There’s apparently a tradition in Japan whereby if your boss invites you out drinking, then you have to stay out until he decides to go home. I get the impression this fella had had one of those nights.

Here was a man wearing a work shirt, trousers and shoes, passed out on the pavement outside a bar. Now, I use the word ‘wearing’ very loosely, as the reality of it is that his trousers were round his ankles and he was surrounded by what I can only assume was a pile of his own shit. That’s right: actual human faeces. I would have paid good money to be a fly on the wall as he walked in to work the following Monday.

A little disturbed and in need of a drink to soften the blow of what we’d just seen, we decided to set up camp in a nearby ramen bar and eat and drink until the train came. As we were more than a little inebriated, the idea of going to what looked like a cigarette machine, placing your order and taking the ticket over to the counter kept us mildly entertained for some time. Desperate times called for desperate measures.

24 hour ramen bar: a gift from the gods.

5am rolled round and it was finally time to go home. I was surprised at just how busy the first train was; I assumed the clientele were a mix of people just getting in from a night out and those in the same boat as us!

Any real ambitions of discovering Tokyo on our day off were put on the back burner, as leaving for work at 8.30am on Saturday and getting home at 5.30am on Sunday more than wiped me out. It was a good start to life in Japan though, albeit a tiring, rather disturbing one.

2 responses to “First Impressions of Tokyo…Sort Of”