If you’ve been following my travels for any amount of time then you’ll more than likely be aware of the fact that I will eat absolutely anything. You’d be forgiven for thinking that I’d learnt my lesson after my somewhat traumatic experience in Beijing, but since moving to Japan I have been eating just about everything weird and (not so) wonderful that I can get my hands on.

Unlike that night in Beijing though – touch wood – nothing I’ve eaten so far has made me sick, which I’m sure you’ll agree is a nice bonus. It’s a numbers game.

If you’ve got a strong stomach and want to be a little bit grossed out, then this list is for you. In no particular order, here are the four most unusual foods I’ve eaten in Japan so far!

You either love it or hate it. Well, usually it’s a case of if you’re Japanese you love it, and if you’re not you hate it. Nattō is fermented soy beans, often mixed with soy sauce and mustard to create the ultimate, slimy, stringy mush.

I accidentally bought onigiri (a rice ball) filled with nattō on my second day in Japan and the smell and taste made my face turn inside out. It’s so overpowering – certainly an acquired taste. Over time though, a mixture of being skint and trying to be on something of a health kick forced my hand a little bit. Nattō is incredibly cheap (around ¥100 for three packs) and one small serving contains around 18g of protein, so I pretty much force-fed myself until I liked it.

The result? I eat it almost every day now!

This is the one that makes people’s jaws drop. “WHAT?! You can’t possibly eat raw chicken, can you?!”

Turns out you can…

A plate of raw chicken. Still here to tell the tale.

The Japanese are well known for their raw food, however I honestly thought it was a typo on the menu when I first saw chicken sashimi in Okinawa. Once I’d done my due diligence (cheers Google), there was no stopping me; I had to try this.

The big question is obviously: Is chicken sashimi safe? Well I’m still here three weeks on, so I guess the answer is yes. Basically – and I’m not an expert on this – I think it’s all to do with how fresh the chicken is (like, it has to have been killed a few hours ago…or something) and what it has  and hasn’t been exposed to in its life. It’s a hell of a lot of trust to put in a chef and a farmer you don’t know, granted, but what doesn’t kill you and all that. They wouldn’t serve it if it was dangerous, right?

As for the meal itself – it was perhaps a bit of an anti-climax. In honesty, the texture was fairly similar to that of raw tuna, and the taste was fairly unspectacular. Recommended, but I’m not in a rush to eat it again.

From savoury to sweet…sort of. McDonald’s in Japan have recently started a limited run of fries smothered in chocolate sauce. Yes, really.

Chocolate chips. It shouldn’t, but it does.

As they’re only available until mid-February, I rushed out on my break at work last week to give them a go and I was really surprised at how well it works. I had my doubts, but the salty fries and mixture of white and milk chocolate go quite well together and make a nice dessert (if eating a three course meal in McDonald’s is your thing; whatever floats your boat).

Seeing as they’re only available for another couple of weeks – and the fact they have enough calories in them to give a dietician a heart attack – I’m not sure I’ll be eating them again but just like chicken sashimi, I recommend everyone tries them at least once! Now, where’s that gym membership…?

Last but by no means least is ‘basashi’ – or to you and I – raw horse meat!

I suppose coming from England, I’ve probably consumed horse meat at some point due to the scandal that we had a few years ago but…willingly? That’s a different story. 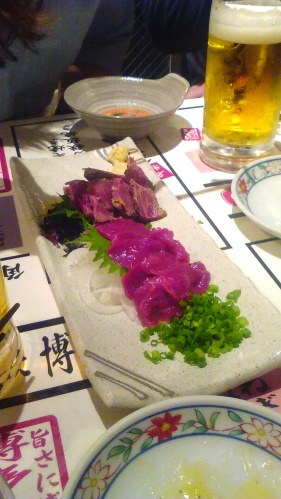 The latest plate of raw meat. This time – horse!

I believe it’s something of a speciality on the island of Kyushu and having gone to a Kyushu style restaurant for a friend’s birthday, it seemed only right to give it a go. When in Rome and all that.

We were served a few different varieties; some tasty, some not so tasty. It all kind of blends in to one (nomihodai – all you can drink – will do that to you!), but I remember the texture being fairly chewy and the taste being nice enough. It’s served with soy sauce and garlic, so that may mask the taste a little but I’d have no qualms about eating it again. One variety we were served was peppered and had a similar taste and texture to pastrami, which is always a winner!

On that note, I think it’s dinner time. Horse lovers, you know where to send the hate mail. Anyone fancy a bite to eat?