I’ve spoken at length in the past about how working weekends is really not conducive to taking in sport in Japan. Sadly, in the (almost) seven months I’ve lived here my live action has been limited to a day at the sumo and a game of baseball; both of which offered new and – at times! – exciting experiences.

Last Sunday, whilst on my break at work, I had a feeling the J.League season would be starting soon so decided to have a gander at a few local teams’ schedules. It’s tough in Tokyo; there are a number of teams in and around the city but only FC Tokyo and Tokyo Verdy actually have ‘Tokyo’ in the name so as a still relative newcomer it can be difficult to actually figure out who’s based in the city and who’s on the other side of the country!

Anyway as it happens, the J.League doesn’t kick off for a few weeks but I discovered that in two night’s time FC Tokyo would be taking on Chonburi FC of Thailand in a ‘winner takes all’ Asian Champions League qualification match at Tokyo’s Ajinomoto Stadium. I’d heard about those ‘magical European Tuesday night games’ many times over the years, but now it was time to see if the Asian Champions League carried the same zest!

Another day, another excuse to get a photo with a random mascot.

My friend Chris found out that there was a direct bus to the stadium from our neighbouring town Kichijoji, so that seemed like the best option.

Kichijoji is regularly voted top of opinion polls about the most desirable places to live in Tokyo, which I must admit made for a new experience for me as I’m used to drinking in places like the Regal Moon and Yates’ in the centre of Rochdale before a game of football. I’ll try anything once.

I don’t even know who I am anymore.

With the best part of an hour to go before the bus, we decided to get some food and drink in the ‘Craft Beer Market’, which on first looks was far too wanky and hipster for what I’m used to, but the ale was good and the food had a hint of Okinawa about it which was a nice flashback. It’s not quite Wetherspoon’s beer and a burger for six quid, but it’ll do.

Upon arrival we set about getting tickets straight away. Having never been to a match at Ajinomoto Stadium before I wasn’t sure what sort of attendance to expect, or indeed how easy getting tickets would be. It turns out that any concerns were completely unwarranted, as the attendance in the 50,000 seater stadium ended up being just over 10,000 people. Anyway, we opted for a ¥2,700 ticket in the home end. The view from the side was great, although the atmosphere behind the goal was much livelier so that might be something to consider next time.

Just like at the baseball, despite food and drink being available in the ground it seemed you were allowed to take your own in as long as all cans were poured in to a paper cup. With stadium beers costing a cool ¥700 compared to ¥270 at the shop, it was a no-brainer. Again, just like the baseball the bag searches were incredibly lax, so the cans we bought at the convenience store beforehand were well ‘hidden’ under my jumper in my bag. This meant we could pour our own beers when it suited us, instead of having them sitting in a paper cup going flat for an hour!

We had plenty of time pre-match to have wander around, so we ended up doing something of a tour of the ground. Having bought a ¥700 beer (hey – we needed the cup!) we set off and were quite surprised at the variety of food available. Unlike the traditional English set menus of pies, hot dogs and burgers, at Ajinomoto Stadium there is a kiosk for all tastes.

However we only realised this after we’d feasted on churros, tacos and burritos at the first kiosk we came to – a Mexican joint. In addition to this, there’s also an Italian, a Japanese place, a KFC and a booth that seemed to specialise in roast beef. You could do a food tour in the build up to the match – definitely one to keep coming back for!

On the topic of KFC, I was surprised to see all types of branding censored around the stadium. In fact on the fixture lists, just for this game Ajinomoto Stadium was actually referred to as ‘Tokyo Stadium’. I presume it’s some ACL advertising rule, but it was strange to see.

Before the match I had no real clue what to expect. It seemed that on paper that the hosts were the favourites for the game but there was still a sense of intrigue about the match. FC Tokyo were welcoming a new manager in Hiroshi Jofuku (or welcoming back, seeing as he also managed them from 2008-2010), and a few places online said that the squad had barely been strengthened over the close-season. Should make for an entertaining game, right?

There was action alright. And there were goals. Oh there were many goals. Nine, as a matter of fact. So, what score did this nine goal thriller end? 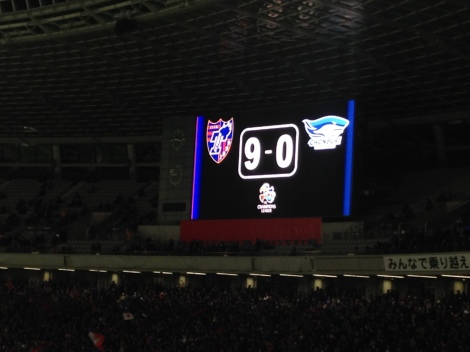 Do not adjust your monitors.

It was a bizarre match. Despite there being nine goals, it was hard to be too excited purely because it was so one-sided. The FC Tokyo keeper could have gone for a cup of sake and a ramen without conceding a goal; he really had that little to do. In all honesty, the game felt like something of a training match. The home team were two goals up after nine minutes, and that was the end of that. It was hard not to feel sorry for the Chonburi players; they’re probably not used to temperatures anything like what you get on a February night in Tokyo and they seemed completely drained as the game went on. The fact they conceded six in the second half probably says a lot.

I’m not complaining, mind. It’s the first time I’ve ever seen such a high scoring game – and I imagine it was the same for the majority of the crowd seeing as this was the club’s record victory. If anything, I’ll probably be a little disappointed when the next game I watch doesn’t contain nine goals.

My stand out players (for what it’s worth) were the FC Tokyo centre back Yuichi Maruyama and central midfielder debutant Ha Dae-Sung. Despite not having much to do, Maruyama swept up everything at the back and if anything did well to keep his concentration levels so high! As for Dae-Sung, he simply bossed the game from the centre of the park.

Next up for FC Tokyo is a trip to Korea to take on Jeonbuk in the first game of the ACL group stages. As for me: I’ll have to wait until March for the next Tuesday night game. It’s good to be back in the swing of things football-wise!

5 responses to “A Nine Goal ‘Thriller’ at Ajinomoto Stadium”