February 22nd is a date that really means a lot to me as it marks the day I packed my life into a bag in 2014 and set off on my mammoth backpacking trip. The trip – that saw me visit 15 countries over 13 months, making countless new friends and creating even more lasting memories – taught me a lot and I guess shaped me into the person I am today. In fact, apart from the few months in 2015 when I returned home to do my CELTA, I guess I could say it’s been one long trip since that very day. Sure, I’ve been back to England for a bit and I’m now permanently based in Tokyo (at least for a while!) but you get my point.

When I logged on to Facebook this morning and was reminded of the fact that today marked two years since I embarked on my trip, I started to do a bit of self-evaluation and think about what I’d learnt, and if anything had changed at all in this time. According to my mates I now have a ‘posh’ accent, but aside from learning how not to sound like a character off Emmerdale, what else have I learnt in these two years?

Bleary-eyed at 5am, ready to face the world…after a bacon butty and a pint at the airport of course.

The world is full of awesome people

No, you haven’t logged into Facebook and stumbled upon one of those really friggin’ annoying stock photographs with a mind-numbing attempt at a ‘deep’ quote plastered over the top of it. Seriously people, stop sharing that shit.

Anyway, I digress. The point I’m making is that over these past two years I have met so many people who I would not only not have the chance to meet back home, but in all honesty wouldn’t have bothered to meet either. Sounds arrogant, but it really isn’t meant that way.

Travelling forces you into a number of situations. Some good, some not so good. When you book into a hostel dorm, you’re essentially playing a human lottery. You might end up sharing a dorm with a bunch of arseholes, but nine times out of ten you will probably be surprised who you end up getting along with. I’ve ended up spending days – sometimes even weeks – with people I never imagined I’d get along with. Whether it’s the Spanish conspiracy theorist (I hate conspiracy theories…), or the Costa Rican guy who claimed to have not worn shoes for over a year (his feet were filthy), or just about any bugger else I spent time with; I truly did learn to become more tolerant of people.

I will eat anything

Was this really a surprise? Maybe not so much, but even I’m amazed at some of the (often ridiculous) stuff I’ve willed myself on to try.

Scorpions? Easy peasy. Starfish? Hmm, not so good. Raw chicken? Not as bad as you’d think. Raw horse meat? I’ll try anything once…

Perfectly safe, so I was told.

Just as was the case with people, I’ve learnt to be more open-minded about trying new foods although to be honest, I was never really a fussy eater beforehand! I’m not entirely sure if it’s a good thing, though. My trip to the food market in Beijing certainly didn’t end well. That said, it did give me some great material for a post; every cloud.

Despite all of this, raw tomatoes are still the food of the devil.

Perhaps the most surprising thing I’ve learnt, as I really never saw myself as a teacher. So far, my two teaching jobs have been fairly painless which – when I actually think about it – isn’t exactly a glowing review. Maybe I should rephrase that to “Teaching is fairly easy and convenient.” Rolls off the tongue, doesn’t it?

I seem to be enjoying it much more than the students.

I’m still not sure if it’s what I want to do in the long term, but right now I can’t see a better option that allows me to travel the world, make money and live in pretty amazing cities like Tokyo. Plus, I’ve lived here seven months and only left Tokyo once, so I guess I best stay a little while longer and explore some more. In fact, this leads me nicely on to my next point…

The best plan is no plan

I remember when I booked my one-way flight to Bangkok back in January 2014, I was often asked what my plan was going forward. When I replied telling people that I would be in Bangkok for three nights then I’d just take it from there, people looked at me like I was an absolute lunatic and said I was either brave or crazy.

The truth is that adopting this mentality was the best thing I ever did, as it allowed me to meet so many new people, chop and change plans at the drop of a hat and – in all honesty – do whatever the hell I fancied! I honestly couldn’t travel any other way now.

A perfect example of this working out: upon landing in Bangkok I passed two Canadian lads having a smoke outside the hostel who had also just landed, were absolutely knackered and just like me, weren’t able to check in for another six hours or so. We decided to head out and explore the city, and within a few days we were on a train up to Chiang Mai together. I ended up spending the best part of a month with Reid and Riley, and even arranged to meet up a month later back in Bangkok for Songkran to mark the end of their trip. None of this would have been possible with a plan, and I dread to think about how much I’d have missed out on. 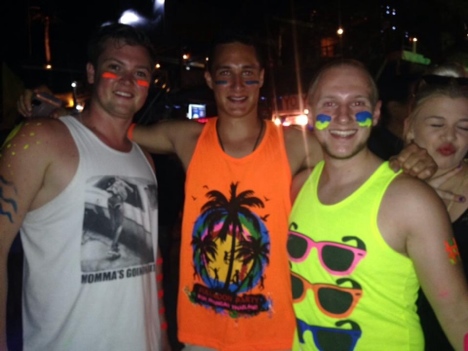 Great memories made possible by not having a plan!

One of the perils of spending so long travelling South East Asia is the inevitable shock you receive when you order a beer on home turf for the first time. After becoming well and truly used to drinking beers that cost less than a quid, it can take a little while to get used to paying three or four times as much for the same drink back home.

It’s not just drinks though, the same applies to food and travel too. It may come as a surprise to some people, but despite Tokyo having a reputation as a very expensive city it’s fairly easy to find a decent meal for the equivalent of a few quid. I’m not talking a ‘Spoons burger and beer here (second post in a row that’s mentioned them – they should be paying me for this coverage), but actual, decent food.

As for travel, the low costs and high standards of almost every metro system in the countries I’ve visited really does put the UK to shame.

Finally, perhaps the most important and significant thing I’ve learnt is that maybe England isn’t the place for me right now. In fact, I know it isn’t.

That’s not to say that I’ll never live in the UK again; in fact I’d say the chances are definitely still pretty high, but it’s certainly not on the agenda right now. There’s just too much of the world to see and too much awesome stuff to experience. I’m not saying Tokyo is home either, but it’s just where I feel comfortable at the moment. In the words of Super Furry Animals: Wherever I Lay My Phone – That’s My Home.

I guess I don’t really know where ‘home’ is right now, and that’s all part of the adventure.