Gigs are like buses for me. No, not in the sense that the very thought of one makes me feel ill (hey, I’ve had some traumatising experiences), but more in the sense that I seem to go months without going to a gig, then two come up in a short space of time.

After catching The Charlatans in Shibuya last month, next on my schedule was Vintage Trouble at Roppongi’s Ex Theatre. This band are quite special to me as they remind me of one of the best days of my life; last year at the BST festival in Hyde Park. Special memories of a special day with some incredibly special people. That day we had a bit of time to kill before going to see Sleaford Mods, and on the recommendation of a friend we strolled along to see this Vintage Trouble bunch.

None of us knew a thing about them, but within a few songs we were absolutely mesmerised by the lead singer Ty Taylor, who channels Otis Redding as well as almost every old American funk and soul star and has the mannerisms and presence of a young James Brown. When he wasn’t twirling and running around the stage, he was crowdsurfing his way around Hyde Park and generally holding the audience in the palm of his hands. Consider the four of us converted. 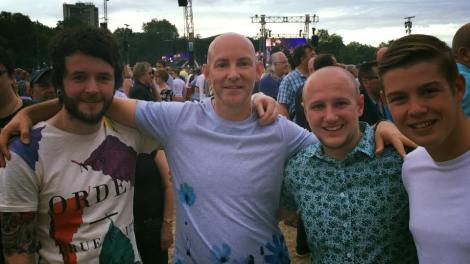 Almost a year on and upon hearing that Vintage Trouble were gigging in Tokyo it was a no-brainer; a day was booked off work and that was that!

It’s easy to be a little dubious when you hear about anything taking place in Roppongi. The area has a reputation as one of the seedier areas of Tokyo and on the few occasions I’ve been there at night I’ve been offered every ‘service’ under the sun. Leaving a bar to a chorus of “MASSAAAAAGE” in the tone of a thousand drowning cats is surprisingly off-putting.

Thankfully, Ex Theatre is in the Roppongi Hills area of town, so it’s a little more upmarket and respectable. Truth be told I was quite surprised at just how nice a venue it was and also how big. Having seen The Charlatans in Shibuya O-East – a fairly small, intimate venue – I was expecting something similar for Vintage Trouble. I certainly didn’t expect a large auditorium-style two tiered concert hall. In fact, we even had to go down three stories just to reach the pit!

Just in case there were any doubts over who was playing that night.

Having bought our mandatory drink (it seems this is common practice at Japanese gigs) we caught the last couple of songs of the support band who, unbeknown to me were apparently a rather famous Japanese band called Urufuruzu (or Ulfuls) – if my knowledge of the katakana alphabet is anything to go by! Kitted out in their suits with a catalogue of funky tunes, they seemed a perfect support act for Vintage Trouble; the Japanese fans certainly agreed.

Taking to the stage at bang on 8.45, the main act began with a set of very gentlemanly handshakes amongst themselves before bursting straight into ‘Strike Your Light’ from 2015’s ‘One Hopeful Road’ album. The great thing about Vintage Trouble is that they have a selection of songs with such varying tempos which allows for a bit of a breather after the more raucous numbers. The opening couple of tracks certainly left the crowd a little breathless (and no doubt – Taylor himself was feeling it a bit too!) and they were followed by a couple of more mellow tracks – ‘Gracefully’ and the lovely ‘Doin’ What You Were Doin’’. 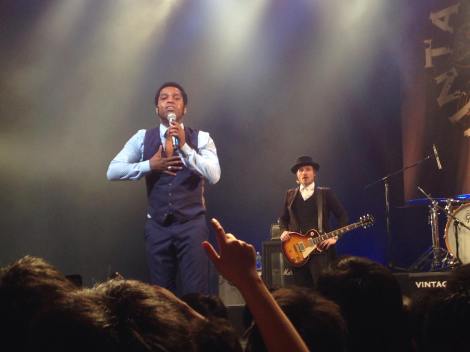 Ty Taylor just has something and I’m genuinely hard pressed to name a better frontman. Howlin’ Pelle Almvqvist of The Hives is probably the only one who even comes close off the top of my head. When he’s not throwing himself around the stage or suggestively gyrating towards the crowd he’s hooking us in with his stories and speeches.

One moment in particular before the beautiful Motown soul of ‘Nobody Told Me’ captivated me, as he gave an impassioned speech about the fact that there are people in the world who don’t think they are valued and are in a dark place. He told us that it is our duty to make them aware of the fact that if they weren’t in the world they would be missed. The theme of handshakes continued, as he then encouraged everyone in the audience to turn to someone they don’t know and shake their hand. An incredibly conservative audience seemed a little reluctant to do so and I was left hanging a few times, but eventually a sympathising lady behind me saved me from embarrassment!

I’m not really doing it justice, but if I’ve somehow intrigued you with that then you can watch a similar speech of his at the beginning of the video below.

The highlight of the night was to come shortly after that, as the set was coming to a close the band burst into the feel-good, old-school rock of ‘Run Like the River’. From what I can gather, this has become a memorable part of their live show over the years as Ty Taylor takes the opportunity to crowdsurf his way around the venue and generally boss the audience about. This show was no different and what is a 3.40 long song on record becomes a 10 minute epic piece live, as he just seems so reluctant to let it end and actually make his way back to the stage. I could try and paint a picture in your head, but instead here are a few videos I caught of this and the set closer ‘Blues Hand Me Down’ – absolutely incredible.

With a frontman like this, it’s almost a little too easy to forget to acknowledge the rest of the four-piece band who hold it all together with some very good craftsmanship.

Guitarist Nalle Colt in particular is allowed to shine during the encore opener ‘Run Outta You’, which starts off as another crooning soul number before Colt is given centre stage for what is essentially a four minute guitar solo over subdued drums and bass. It could be classed as a little self-indulgent if it wasn’t so bloody good; instead it becomes one of the more atmospheric moments of the night as the audience just stand in awe of his talent and Taylor – who has taken something of a backseat at this point – looks like the music is completely flowing through and possessing him.

After one more upbeat track in ‘Pelvis Pusher’ to end the set, the band leave the stage and the lights come up. An incredibly sweaty couple of thousand people make their way up the escalators and into the night – no doubt with “Ruuuuun baby ruuuun!” going round their head. On a night that was destined to bring back so many good memories for me, it was incredibly fitting that Vintage Trouble should help create even more. A great gig.