No, seriously. Let me explain.

Last Monday I woke up to a text from my friend Rumi who suggested that we visit ‘Paxi House’ in Kyodo on the west side of the city. Paxi House is a restaurant with a twist; every dish contains ‘phakchi’, or coriander to you and I.

A restaurant that specialises in coriander? Interesting, right?

As it happens, after gathering numerous opinions this week I’ve since discovered that coriander is a foodstuff that really divides opinion in Japan. A bit like Marmite in England, I suppose. Although if you like Marmite you are definitely wrong. It is vile. Fact.

So yeah, how did this help with my teaching? Well, first of all I started my lessons by asking the students’ opinions on coriander itself which – in some cases – brought out very impassioned responses and got everybody talking about their love/hatred (delete where appropriate) of this seemingly harmless herb.

Secondly, I took it as an opportunity to teach some incredibly informal and probably incorrect usages of the word ‘Marmite’ as an adjective. For example:

Anyway, where were we? Ah yes, Paxi House…

Words to live your life by…

We decided to wing it and just turn up in the hope of getting a table and by ‘deciding to wing it’, I do – of course – mean neither of us thought to make a reservation. Luckily we got there seemingly just before the peak period, so we were able to be seated but were told we would probably only have an hour before someone with a reservation turned up. Challenge accepted.

There are many benefits to having Japanese friends, and one such benefit played into my hands here as the menu was all in Japanese. I’ve spoken in the past about my attempts to learn Japanese and I’m ok with hiragana and katakana, but when kanji is thrown into the equation I’m completely flummoxed. As a result, Rumi was put in charge of ordering the food for the evening while I chose the beers with the help of pictures on the very international, extensive drinks menu.

Just two beers from the vast, international selection on offer at Paxi House!

The first dish to arrive was a plate of phakchi spring rolls, which instantly gave me flashbacks to my time spent backpacking in Vietnam. When you hear ‘spring rolls’ the first thing that springs to mind (intended, sorry) is probably a silver foil tray of deep fried pastry rolls stuffed with unidentified meat from the local Chinese takeaway. It certainly was for me until a few years ago when, upon ordering spring rolls in a Vietnamese cafe, I was presented with a plate of rice paper rolls with a much softer and chewier texture and – I imagine – a fair few less calories!

The spring rolls in question here were indeed of the rice paper variety and were stuffed with coriander (bloody loads of it, too) along a solitary prawn each too. I’m really not doing them justice here and I’d completely understand if you weren’t sold on the idea, but they were delicious, especially when dipped in the accompanying sauces. That said, if you’ve been reading this blog for any length of time you’ll probably already know that my opinion on food may be questionable at best.

Next up was the phakchi salad which, in honesty, wasn’t much more than a plate of coriander with some crispy things on top. I couldn’t actually figure out what these unidentified crispy objects were on top, but they were alright. Despite sounding like a fairly boring dish, this was quite a nice, easy one to pick at when tucking into the rest. 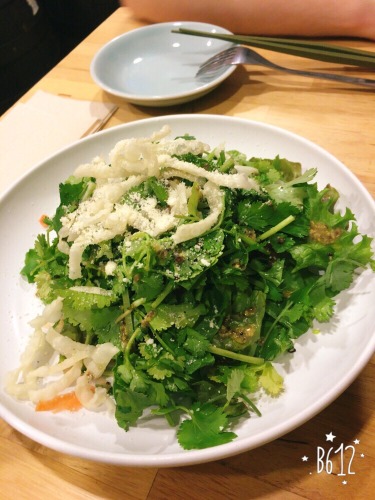 Phakchi salad = a plate of coriander with some crispy bits on top.

Talking of ‘the rest’, shortly after the salad arrived we also started to make progress on a plate of peppered beef which was served on a bed of – you guessed it – coriander! The beef was cooked to absolute perfection and with just the right amount of pepper, it was my favourite dish of the night. Despite not really eating a great deal aside from a few bits and a lot of herbs, I was really starting to fill up at this point. My nomihodai hangover and trip to cheap and cheerful Italian chain restaurant ‘Saizeriya’ earlier on in the day may or may not have played a part there.

Peppered beef with lime, served on a bed of coriander – mouthwatering!

With time on our limited hour-long seating running out and my stomach getting full we decided to just go for one more dish. When I was doing my Vietnam road trip back in 2014 I became a little reliant on pho (noodle soup) to start the day, so when the idea of pho as our final dish was suggested there was only one answer from me.

As Im sure you’ve come to expect by now, the pho was also served with piles of coriander and was a nice, fairly light way to finish off the meal. おいしい!

Flashbacks to ‘Nam, and not the ones you hear about in the movies.

As time was winding down but with the staff in seemingly no rush to kick us out, we decided to try our luck and order another drink. As I mentioned previously the drinks menu had an extensive range of foreign beers and after reliving some backpacking memories with a Lion Stout (Sri Lanka), a Singha (Thailand) and a Beerlao (Laos), we decided to be a little more adventurous and ordered a pair of phakchi mojitos.

Yes, that is coriander in a drink and yes, it was good.

All I’ll say is…don’t knock it ’til you’ve tried it! I was initially dubious; I’m not a fan of mojitos anyway because I think mint is far too overpowering in drinks and was absolutely certain that coriander (and there was a lot of it!) would be the same. However, I was surprised to find that I could not only drink this but actually enjoyed it. Maybe the 9% Lion earlier had numbed my tastebuds a little.

We didn’t want to push it any more, so upon finishing our drinks we settled the bill and headed out. The bill came to just over ¥9,000 for four dishes and eight drinks – probably not the cheapest meal you’ll ever have but seeing as coriander is seemingly something of a novelty here it’s well worth it!

If you’re in the area and you fall on the ‘love’ side of the coriander fence, click here for Paxi House website where you can do what we didn’t do and make a reservation. Enjoy!

3 responses to “Controversial Coriander? A Visit to Tokyo’s Paxi House”