To read about part one of my Obon holiday, click here.

After an early-ish night and a late-ish morning (hey, I was on my holidays after all) it was time to set about exploring Osaka.

As per usual my planning and research of my destination was minimal if not nonexistent so I woke up with very little idea of what to do aside from eat a lot of the famous Kansai cuisine. My research had in fact been limited to a single tweet sent out when I booked the flights along the lines of ‘What the bloody hell is there to do in Osaka…HELP?!’. Thankfully, a few colleagues including the ever-knowledgable Tokyo Fox wrote back with a few suggestions – some of which were even unrelated to food.

The only real sight on my agenda was Osaka Castle so I set about heading there as midday approached. My sightseeing companion for the day was Myriam, a fellow backpacker (which I was for those three days!) who had just arrived that morning. It turned out to be an educational experience from the first few minutes, as I discovered that Myriam is from Tunisia which – little did I know – is apparently pronounced Tu-NEE-zia. Be honest, who else has been pronouncing it wrong all their life?

Upon arriving at Osaka Castle we were surprised to be in something of a minority in the sense that we were actually heading in the direction of the castle. In fact, we seemed to be the only ones as pretty much everyone else in the vicinity was making a dash for the train station, and seemingly being instructed by guys with megaphones.

Now maybe it was just a bit of paranoia with recently goings-on in the world but something really didn’t seem right here and, truth be told, we were both a little concerned! I decided to start by checking the opening times of the castle and it was still open for a few more hours so there were no worries there. My next – completely over the top I may add – thought was to search for ‘Osaka Castle’ on Twitter and see if there were any live tweets about an evacuation or problem of sorts at the castle. Nothing!

We decided to go with the flow and keep heading towards the castle and a few hundred meters later we discovered the cause of the mass exodus. Nope, it wasn’t kicking out time, and there certainly hadn’t been a bomb scare. Nope, the root of the issue was…a ‘Disney on Ice’ show that had just finished at the nearby arena! D’oh! 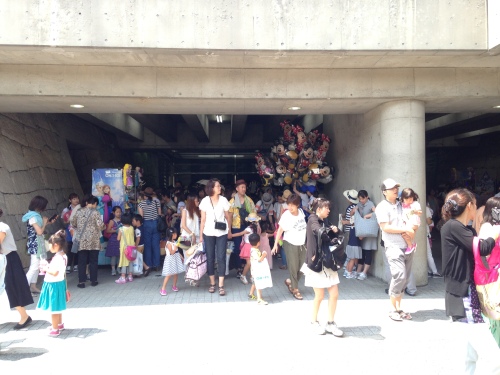 The cause of our concern…Disney on friggin’ Ice.

Finally it was castle time and – perhaps surprisingly – there were actually other people there and not everyone had vacated the area. Now I know this is probably a little ignorant but I have a bit of a thing with temples, shrines and castles to an extent where I feel like once I’ve seen a few I’ve seen them all. To be honest, visiting these places has now become nothing more than a quick photo-stop, scoot around the inside having a quick look at the displays and occasionally reading the odd bit of information before moving on to the next. It’s bad, I know.

However, in Osaka Castle it was a little different. We quickly took in the first few exhibitions before reaching a stand where you could put on a costume and an old emperor’s hat for the measly sum of ¥500. As you may have gathered from pictures I’ve posted in the past I’m a sucker for anything you can pose with. Statues, those portraits you can put your head in…you name it and I’ll have a picture with it! ¥500 has never left my pocket quicker. Thankfully, I wasn’t the only one immature enough for this, as I was joined by another likeminded individual…

After Osaka Castle there was time for a quick food break (more on that later) before Myriam headed back to the hostel for a nap – all I can say is thank God I didn’t opt for a night bus! As I had plans to head to Nara the following day I decided to fit something else into the Osaka schedule and headed to the Sumiyoshi Taisha shrine which – as you may have expected – didn’t really do all that much for me. Very impressive to look at, but not too dissimilar to the ones I’ve seen over the past year or so!

Pretty much every recommendation I received for Osaka contained at least one or two references to the local cuisine. Sure, you can get takoyaki, okonomiyaki and kushikatsu pretty much anywhere in Japan, but I was told they’re just that little bit better in Kansai. Who am I to question the knowledge of those who’ve been here much longer than I have?!

First on the menu was takoyaki, which we wolfed down at Abeno Takoyaki Yamachan in Tennoji on the aforementioned food stop. I use the phrase ‘wolf down’ very lightly, because I’m almost 100% certain that no one has ever eaten takoyaki without burning the roof of their mouth. These little octopus dumplings are the Japanese equivalent of the molten cheese from an oven pizza – no matter how long you wait, you’re still going to do yourself damage.

Later that evening we went for the famous okonomiyaki and monjayaki in the equally famous Dotonbori district (again, more on that later). I have to say that these are two of my favourite Japanese dishes so I was excited to experience them at their best! After a lengthy walk trying to find a place we could cook it ourselves as seems to be commonplace in Tokyo, our appetites got the better of us and we decided to leave it to the experts.

The okonomiyaki (essentially a sort of cabbage omelette) was structured much better than any time I’ve ever done it myself although it didn’t taste too different to the ones I’ve eaten elsewhere. Maybe I’m a little biased towards my own culinary skills.

Almost as good as the okonomiyaki I’ve made in the past.

Monjayaki is one that you can’t really get wrong as again there’s not much more to it than mixing up some basic ingredients including cabbage, stock, flour, a few vegetables and anything else you may wish to add. After that you just whack the mix onto the hot plate and let it cook away before digging in with tiny metal spatulas. It does look a little like puke but don’t let this put you off – it’s delicious! 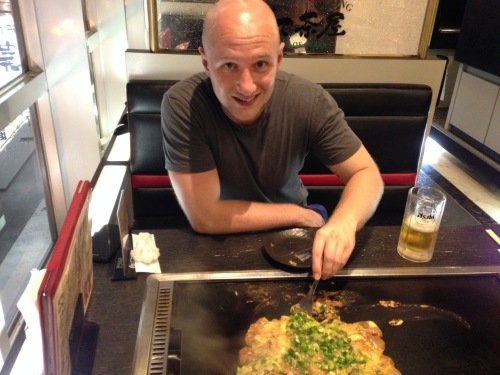 I can assure you it tastes better than it looks.

After a few steady drinks during the day and with dinner, we decided to see what Dotonbori had to offer aside from the famous Glico Man. I must admit I’d never heard of the Glico sign but upon seeing it – and the masses of people queueing up for a quick picture – I decided it must be something fairly famous so got in on the action myself.

A fine athletic specimen, and the Glico man.

One difficult thing about drinking in Japan is finding the right type of bar. It’s difficult to find a place to quickly pop in for a quick drink with no obligation to buy food aside from The Hub (a chain of English pubs in Japan), and it’s also tough to tell whether a bar is a legitimate bar or a ‘girls’ bar. I don’t think they require any explanation.

After a while we found a sign for a standing bar simply called ‘Sun’ hidden away in the basement of a building and popped in there for a few swift ones before the last train. The lovely owner was behind the bar and she only had one customer in so we managed to get a bit of a conversation going with our very broken Japanese and their limited English.

It was here that things got a little odd as the man in the bar kept digging random copied CDs out of his bag and giving them to us. He appeared to be telling us that they were the same CDs as the ones playing in the bar, but why he had a surplus to hand out is anyone’s guess. Anyway, I now have seven copied compilation CDs knocking about with titles such as ‘Deep Love’, ‘Changing Same’ and ‘Love is Made Night’ which are just waiting to be made into some wall art for my new apartment.

This lady is awesome, visit her bar if you’re in Dotonbori!

After a few quick glasses of sake it was time to dash off for the last train. We made the first train from Namba but upon transferring at Shin-Imamiya it appeared that the last train had simply been cancelled and we’d need to find our own way home.

It’s funny how these things turn out – as what followed was possibly the highlight of my time in Osaka.

After a few failed attempts to flag down a taxi, Myriam suggested we head into the nearest bar for a quick drink before reassessing our options. The closest bar turned out to be one of those very thin bars where everyone sits at the counter – basically full of locals who can either make you feel really welcome, or really not.

Thankfully, everyone was really welcoming (barring the guy passed out on the seat nearest the toilet, but I’m pretty sure he’d have been nice had he been conscious) and within minutes of being there I’d had the karaoke microphone thrusted into my hands. As you know, I don’t require a second invitation. One quick drink turned into quite a few, as well as a number of songs including my first ever rendition of Scatman which was naturally a very proud moment for me.

We ended up staying until the karaoke machine went off and the mops came out – in other words: closing time! After an unmemorable taxi ride and some deeply unsatisfying fast food, we decided it was time to call it a night at 4am. I had very little confidence that I’d be up bright, early and fresh for Nara the following day, but it was so worth it. You only regret things you don’t do, right?

Click here for the third and final part of my Kansai holiday series!