As expected, the rush to leave Suzuka circuit resulted in what looked like an incredibly slow moving crowd traipsing towards the tiny, rural train station.

I mentioned in the previous post that I had to wait for Adam by the ferris wheel (not as romantic as it sounds) and, as such, decided it would be best to take my time and grab another beer whilst I was on my way. I gathered neither of us would be in a rush, so slowly made my way towards the meeting point via the track with Mark – one of the British blokes I’d been sat with.

It was a little surreal to be casually wandering across the track that I’d seen over the years on TV and video games, and I couldn’t help taking a few pictures along the way. I’m sure Mark was glad to see the back of me when we went our separate ways at the ferris wheel. I should probably stop mentioning meeting and parting ways at the ferris wheel; it sounds far too much like an American teen movie. 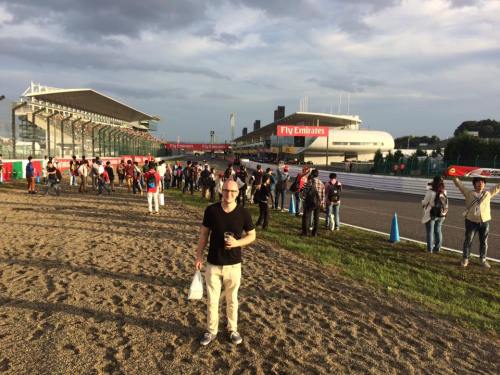 One of many photos my new mate Mark had to take!

The 18.45pm train was still absolutely packed despite the race finishing a couple of hours before; I’d have hated to see the train immediately after the race. We bumped into Mark again on the train and he joined our group for the night as we settled on plans for food and drink later.

A quick visit back to the hostel was in order as I needed to check in and – as I soon discovered – make my bed. I’ve kind of got used to sleeping on futons now so there were no real surprises when I arrived in my dorm to find a folded up futon and duvet in the corner. No real problems there, although trying to put a duvet cover on after about seven beers is quite a struggle. In fact, it took me so long that Adam sent me a Facebook message asking if I’d fallen asleep!

A lot of effort for a few hours of sleep!

With my bed made and my clothes changed it was time to reconvene at Nagoya station before settling on an eatery for the night. In the end we opted for Watamin-chi – a cheap and cheerful chain izakaya. The food and drinks kept flowing at a steady pace; I had the benefit of not having drank too much the night before whilst Adam and some other members of the group were still feeling the effects of the pink champagne they inexplicably bought the night before.

A few more beers and warm sakes went down nicely and it was time for many of the group to go our separate ways. That said, this was my ‘big’ night in Nagoya whilst most of the others had had theirs on the Saturday, so I had no intentions of going home. Adam, Mark and I decided to wander around for a while to find another watering hole.

After a short walk we opted for an Okinawa-style bar. This is where it got fun. After a few drinks we started speaking in very broken English and Japanese with the two people on the table next to us – a guy and girl called Takeshi and Kotomi. Their English was basic and our Japanese was worse, but somehow we made it work.

Kotomi was on Skype/FaceTime/*ENTER ANY OTHER VIDEO CALLING SERVICE HERE* to a group of her friends who were responding with text messages. Adam and I wandered over to check out what was going on and were greeted by a lovely message from one of her friends that simply said ‘Big penis’. Another followed by saying ‘Hello stallion’. The way to a man’s heart is via his ego. The night was going well.

No, I haven’t got a clue either.

This bar soon called last orders and we decided to head on to another bar down the road. Mark had a flight the next day so called it a night here and headed back to his hotel, whilst Adam and I continued the party. On the way to the next bar we saw what was a first for me in Japan: an actual fist fight! Naturally, it happened outside the Hub – an English pub – and looked like a case of two young lads getting a bit carried away after a few drinks. It was over very quickly and we moved on swiftly.

The night carried on in the same vein as the beers continued to flow. Adam called it a night around 2.30am whilst a pair of Kotomi’s friends joined us a little later; better late than never I guess! It’s incredibly blurry from here on out, but I do remember Takeshi and Kotomi refusing to let me pay for anything, with me promising to return the favour when they come to Tokyo. Whether that ever materialises is another matter, but at the time it felt genuine. It’s the thought that counts, isn’t it?

What should have been a 10 minute walk back to the hostel took more like half an hour as I found myself literally doing laps of Nagoya station and coming out of the same exit time and time again. Eventually I found my way to my lovingly prepared bed at around 5.30am and passed out instantaneously.

I awoke at 11.15am the next morning to series of messages from Adam that went a little something like this…

9am
Did you make it back then?

Despite being a very punctual country, it seems like the Japanese hospitality industry doesn’t seem too bothered about late checkouts which is a blessing in disguise, as I’ve never checked out of a Japanese hostel any earlier than half an hour after stated time.

Once I was showered and checked out, we had about five hours to kill before the bus back to Tokyo. After consulting many students and good ol’ Wikitravel, it seemed there wasn’t a great deal to do in Nagoya aside from see the castle.

We decided to find it on foot on the off chance we may stumble upon something of interest. The two main points of interest on the walk were FamilyMart, where I picked up a sandwich in an attempt to ease my hangover, and this shop. Make of that what you will.

Your guess is as good as mine.

When we got to the castle it seemed like many F1 fans had the same idea, as we were surrounded by McLaren, Mercedes and Ferrari t-shirts. We spent a bit of time wandering around, but as I’ve mentioned in my Osaka and Okinawa posts, I struggle to get excited about castles and temples these days. I realise it sounds like a bit of a ‘Billy Big Bollocks’ attitude, but once you’ve seen as many as I have there’s only much enthusiasm you can muster.

Having said that, we eked out an hour or so of wandering around before we decided that was enough. Naturally, we got the standard picture with the castle in the background where we both managed to appear a little more enthusiastic than we were actually feeling.

After a curry lunch (not the wisest choice considering my state), we made our way to the bus station for our 5.15pm return to Tokyo. Seeing as this wasn’t to be a night journey, I decided to slum it with Adam and the rest of the rabble in the cheapest bus possible.

The seats were much more cramped than the one I had taken on the way down, and you had to share a piece of plastic that was supposed to be an armrest but was closer to resembling the Berlin Wall in its height and immovable nature. I actually found myself feeling grateful for my lack of sleep and hungover state, as sleeping on the bus would make being penned in a hell of a lot easier. 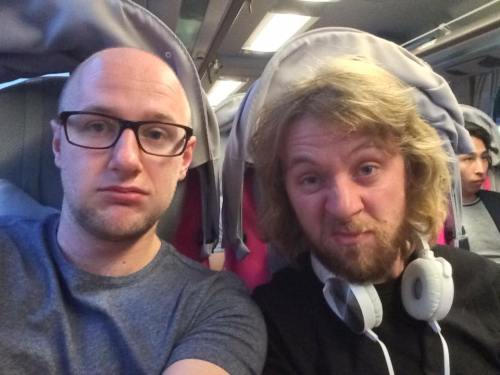 “Pull a daft face if you don’t fancy a six hour bus ride back to Tokyo”.

The journey home was due to take six hours but we soon discovered that this particular day was a national holiday. The holiday was ‘Sports Day’ which I associate more with a day of dicking around at school instead of a national holiday, but each to their own. In hindsight, sports day at school may as well have been a day off considering how little I participated.

We were due back into Shinjuku for around 11.15pm but the traffic came to a standstill somewhere around two hours outside of Tokyo. Apparently we weren’t the only ones heading back to the city after a weekend away. Thankfully I had little trouble sleeping, with the aid of the ingenious minds of the Japanese bus designers…

Having a well earned bit of shut-eye on the way home!

We eventually arrived back just before midnight. It had been a hectic couple of days for me and I was feeling hungover, tired and generally drained; oddly enough I can’t wait to do it all again. See you next year Suzuka!

2 responses to “One (Heavy) Night in Nagoya”