I’ve always said the best plan is no plan and this trip to Taiwan has been no different.

After a suspiciously stress-free journey from Tokyo – well, unless you count catching the wrong train to the airport, finally ending up in the women-only section of the right train during the morning rush hour, getting eyed as a pervert gaijin, and spilling a full glass of coke down your light grey joggers because of turbulence on board the flight as stressful – we arrived in Taipei with three days to go before Christmas and very little in the way of plans. 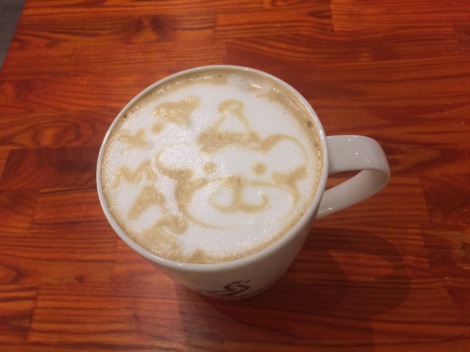 Here’s a Christmas coffee to get you in the festive spirit.

Now as I’m sure you know I’m not at all the judgmental type and I never ever ever make snap decisions on things before I know all the facts. Ha.

Due to my not at all judgmental nature, I was not at all suspicious when my mate Sam said he’d seen a post on Craig’s List about a gathering organised by a local girl – Maggie – on Christmas Eve. 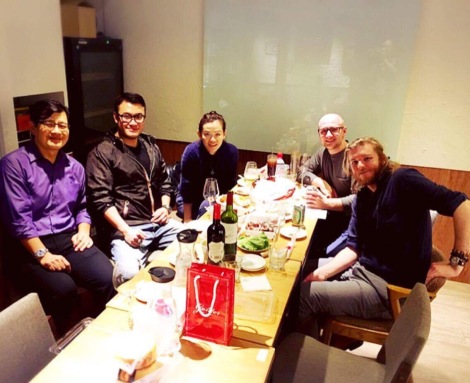 A warm welcome to Taipei!

As it happened, Maggie had spent some time living in London and had felt a bit lonely during the festive period and wanted to host an event at a friend’s cafe for those who may be visiting or living in Taipei and find themselves in the same situation. Nice or what?!

To break the ice we suggested a few drinks the night before Christmas Eve. After agreeing to meet Maggie at 8.30pm at a bar, us two brainboxes found ourselves traipsing around Zhongxiao Fuxing (try saying that pissed) for half an hour before finally finding WiFi at a 7-11 at 9pm. Maggie had understandably gone home by this point, but we managed to persuade her to come back out and an hour later than planned, we caught up at another bar. In case you were wondering, we got a taxi this time!

After a few Taiwan Beers (not sure how they came up with that name), we headed for a midnight snack of…well…lots of pastry, dough and soy milk. Having not eaten since midday, Sam and I would have eaten anything and this didn’t disappoint! 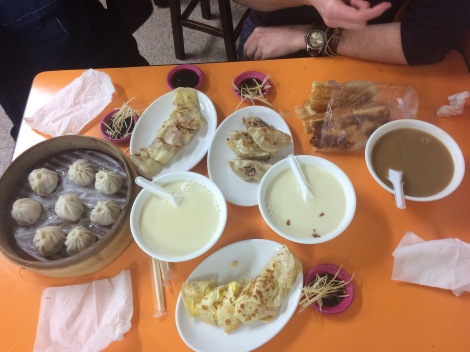 A selection of the stodgiest food known to man!

We had plans to meet at the cafe around 4pm, so after a well earned lie in we headed to Lonshan Temple to do our tourism for the day before making our way to the party. 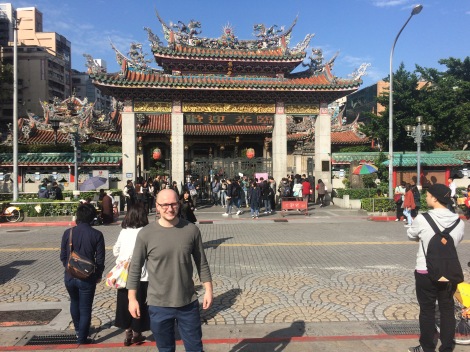 I think living in Japan has got to us both a little bit as we arrived at the cafe at almost 4pm on the dot – probably still late in Japanese terms! We soon discovered that this culture very much doesn’t exist outside of Japan as we were the first to arrive, so decided to deposit our beers and cakes (couldn’t turn up empty handed, could we?!) and had a wander around the neighbourhood.

After our fashionably late second arrival, the food and drinks started to flow and a number of people came and went too. First up was a few small plates from the cafe including New Orleans chicken (apparently New Orleans is famous for spice – don’t tell me this blog never reaches you anything), some delicious pork and bread as well as a salad.

Maggie had ordered a turkey from a shop but I think the idea of picking it up was too much of a hassle in the end so instead we got some takeaway pork and duck delivered to the cafe instead! 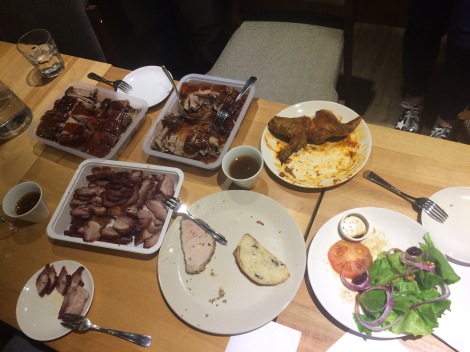 The remains of our Christmas Eve feast!

The cafe closed at 8 so we said our goodbyes and went our separate ways. The night was still young for us two though so we ventured back into the Zhongxiao Fuxing area to try and find a watering hole.

After stumbling upon a bar with a particularly sour-faced waitress – seriously, she made some of the waitresses I encountered in Russia seem laugh-a-minute – we eventually found a Japanese style bar with cheap booze and a nice atmosphere.

It was here we met four local girls with a particularly intriguing lie detector game. Basically, you strap your hand to the device, you get asked a question and if the machine determines that you’re lying then you get a small shock! I’ll let the video do the talking.

It’s amazing how fun something like this is after you’ve had a few bevvies, as I’m sure we played for well over an hour and the questions predictably got more personal and outrageous. 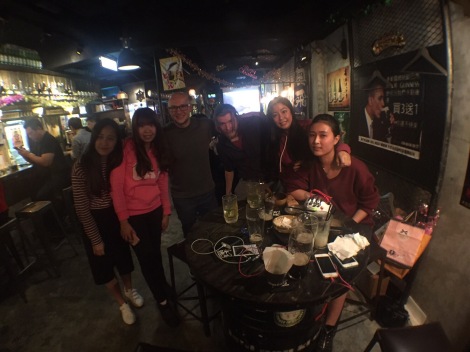 A little worse for wear after countless highballs and shocks.

Again it was time to say our goodbyes and move on to the next place. Sam’s mate was at a club not far away so we headed there and that was it for the night. As you may expect it’s a bit blurry from then on but the state we were in on Christmas Day suggests a good night was had by all. It might have been a very different Christmas Eve by our standards, but some things never change!

One response to “Christmas Eve With New Friends in Taipei”