I imagine for most people the stereotypical view of big bustling cities such as Taipei, Hong Kong and Tokyo is one of a polluted concrete jungle with more people than pavement space.

It’s for this reason that I’m always pleasantly surprised when I find myself in some nice nature in these kinds of cities. Hong Kong has the Dragon’s Back hiking trail just a short bus ride away from the hustle and bustle, Tokyo has Mount Takao (which I’m yet to visit!) and Taipei, as we discovered, has Elephant Mountain.

Feeling suitably refreshed from an early night on Christmas Day, we decided to tackle Elephant Mountain on our final full day in the city and catch the sunset.

We arrived at the rather crowded mountain at around 3.30pm and – for some reason – I was quite surprised to see we weren’t the only ones with this idea. I’ve no idea why, but I’m often shocked when I discover I’m not the only one to come up with ideas like this. Maybe I overestimate my own level of creativity.

The next surprise came shortly after when, about 30 minutes into the ‘climb’, we arrived at an observation platform which was jam-packed with people.

The Asian equivalent of towels on a sun lounger.

As you can see, many people not only had the same idea as us but had also got there way before to set up their tripods! And there was me thinking we could just rock up and enjoy the sunset with a few beers and peace!

Because of the fact we arrived a little too early, we couldn’t really be arsed hanging around for another hour or so in the hope of catching the sunset over a collection of heads. Well, in reality that wouldn’t be too much of a challenge for Sam who’s considerably taller than me. Anyone who thought being a short guy would be easier in Asia is very much incorrect! 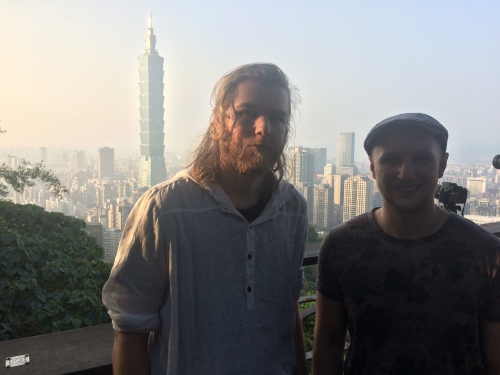 Eventually we spotted a gap in the crowds and took our opportunity!

Impatience got the better of us and we decided to carry on heading up the mountain with no real plan.

The lack of a plan was working out quite well as the amount of people dwindled the higher we got up. We kept on wandering until eventually we decided to head on all the way up to the peak. We had no idea really how long it would take and with the sun well and truly setting there were a few doubts about how wise we were being. That said, we thought turning back would be a little dull and probably take just as long. 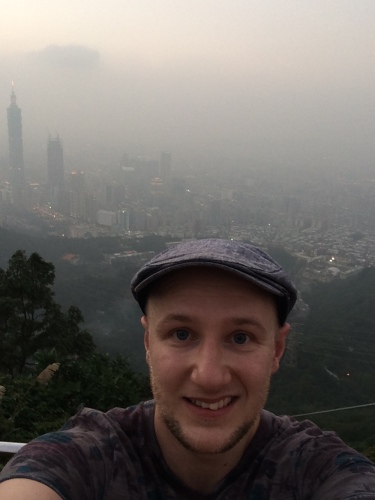 How wrong we were.

One thing I’ve noticed in Taiwan is how quickly it seems to get dark. You can get on the train and go just one stop along the line and it will go from dark to light in that time! Needless to say by the time we reached the peak of the mountain the sun was well and truly setting. 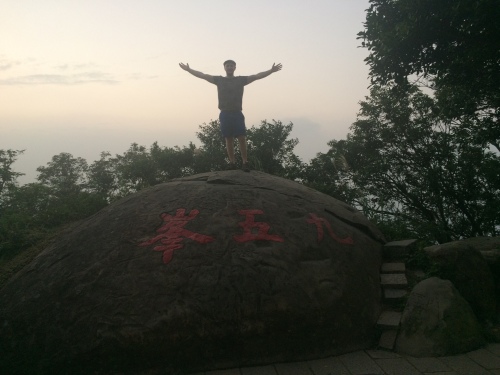 Now obviously what goes up must come down so we had no choice but to start our descent. It wasn’t quite as painful as the descent down Mount Fuji, but I’d be lying if I said I didn’t get a few flashbacks!

It was all going very smoothly, as had been the case with the entire trip up until this point. We came to a crossroads which gave us the option of heading back to the entrance we started at, or going the complete opposite way to the Lishan Bridge exit. Now, bear in mind it was pitch black and we were very hungry; which option do you think we went for? 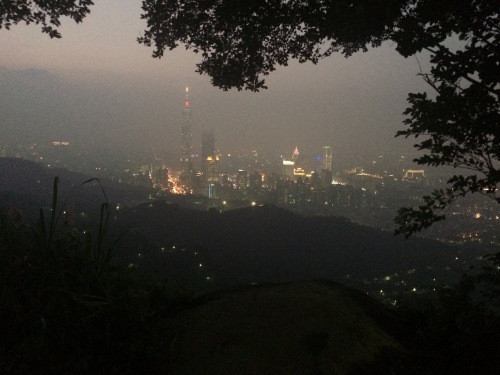 The last time we would see central Taipei for a while!

That’s right, Lishan Bridge; the option we knew nothing about, was miles away from anything and took us down a dark, secluded path. Variety is the spice of life, I guess.

There were a few hairy moments when I almost slipped flat on my arse and we considered going back, but we guessed no matter where we were we’d be able to find a bus or a taxi; this is Taipei after all. 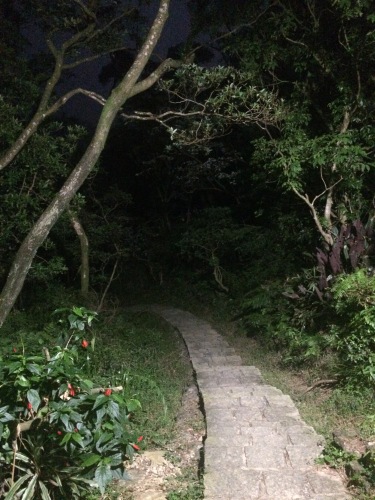 No one would be silly enough to go down here, right?

The problem with walking up a mountain and coming down the other side is the fact that to get back to the other side you either have to go back up and down, or walk around it. We opted for the latter option, foolishly thinking a taxi would drive past or a passing car would take sympathy on us and give us a lift.

There wasn’t really much around once we got to the exit. Well, that’s an overstatement actually; there was absolutely nothing around; no people; certainly no buses or taxis. We only had one option and that was to walk. 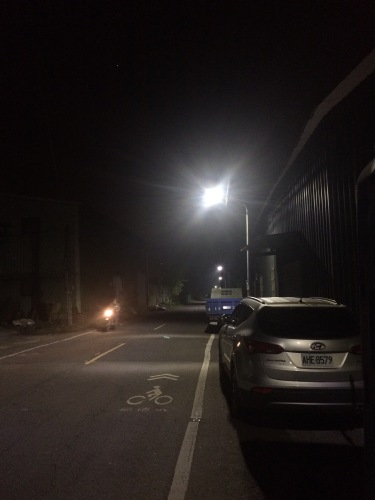 Our view for the next two hours.

There was no such sympathy from anyone, and we ended up walking along the long and winding road for about 2 hours. Google Maps said the nearest station was 2km away, but that was on the other side of the mountain. In reality, the nearest station (Liuzhangli) was probably about 5km away.

That’s not to say it was a lonely walk though, far from it. We were given a lot of attention from the local dogs (jackals) who took it upon themselves to bark and growl threateningly at us. Now I do like dogs, but when you’re a stranger on their patch, they’re off the lead and growling at you in the dark it’s safe I say they’re not the most comforting animals to be around.

Most of them were all bark and no bite, however there was one particular dog who took a run at us and looked ready to rip us to shreds. Imagine our relief when he was yanked back by a piece of rope that had tied him to a wheelbarrow! Panic averted. 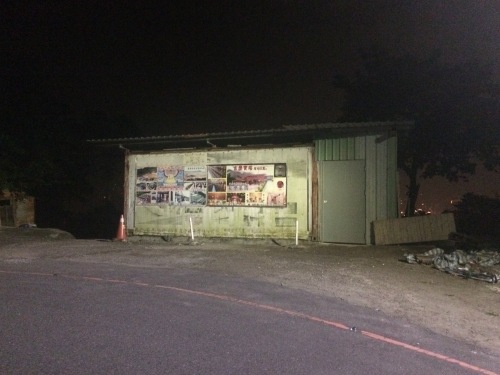 About as scenic as it got.

After a few more run-ins with the local dogs (and their owners who seemed to take great exception to our mere existence), we eventually found ourselves back in civilisation. I’ve never been so excited to see the bright lights of a 7-11! 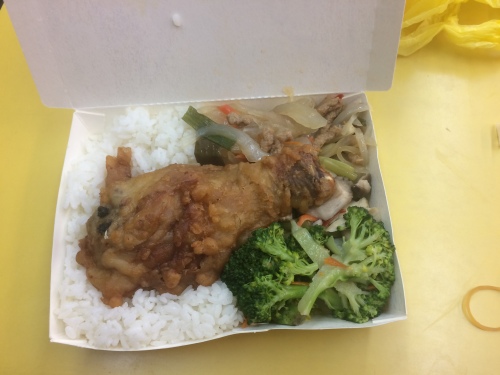 This was devoured at the speed of light.

Our knight in shining armour came in the form of a cafeteria at the end of the long and winding road (which was totally different from how the fairytales described it) and we wolfed down a meal in what must have been a record time. I actually said to Sam recently that this meal was one of the best we’d had in the entire trip, although I think in hindsight even stinky tofu or durian would have hit the spot at this point.

I guess beggars can’t be choosers!

3 responses to “Lost in Taipei”