A fairly little known fact about me is that I’m quite a big ice hockey fan.

Despite the game’s fairly small following in the U.K. there are still plenty of opportunities to catch live games which I used to do in Manchester and Sheffield. Further afield I’ve taken in a KHL game whilst in Russia and – work permitting – I catch a few NHL games a week too via *cough* streaming sites *cough*.

As is often the case with random sporting days out here (see football, horse racing), I was joined by Neil and Glen at the Dydo Drinco Arena (seriously) in Higashi-Fushimi for day two of the annual visit to Tokyo by the four Japanese teams in the Asian Ice Hockey League. 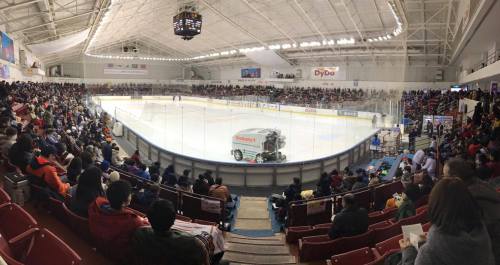 Perhaps rather ignorantly I just assumed there’d be a team for every sport in Tokyo, so it was a bit of a shock to me when I found out that there were only four professional teams in the country: the closest being in Nikko, with the others in Tohoku and two in Hokkaido. I suppose it makes sense for 50% of the teams to be based in the coldest part of the country when you think about it. Annoyingly though, as someone who has been described in the past as having ‘that lower league, local team smugness’, it does make it a little difficult to support my local team!

I couldn’t quite imagine masses of travelling ultras making the trip from Hokkaido, but seeing as the games are only played in Tokyo one weekend a year it was hard to know what kind of turnout to expect. In the end we thought it would be best to play it safe so I used my excellent Japanese skills (translated everything through Google) to get us some advance tickets for ¥2,500 from Lawson and we were on our way.

It’s been a while!

Our tickets were the cheapest (still 10 days before pay day!) and the reserved sections were all full up. Our unreserved tickets allowed us to take any space along the bench-style seats right at the front and we ended up having almost a full bench to ourselves.

As per usual people had arrived well before the 1pm face off and reserved their seats with all sorts of scarves, newspapers, blankets and what not. Just like the Germans have the stereotype of reserving sunloungers with their towels, Japanese sports fans will reserve a seat at a sporting event with absolutely anything; even a wallet isn’t out of the question!

You may notice I said that seats were being reserved with blankets which was a sign of things to come. For some inexplicable reason, I didn’t think that a building filled with ice in the middle of winter would be too cold so I just turned up in a t-shirt and thin zip-up hoodie. Neil, Glen and just about everyone else in the building were wearing multiple layers, wooly hats and scarves! Even a good few beers couldn’t warm me up, and by the end of game one I was struggling to feel my hands and feet.

Not even a hug from my valentine could warm me up!

Speaking of which, there were a couple of hockey games to be watched and reported on but I’ll have to be honest and say that my memory isn’t too sharp due to the fast-paced action and the number of beers/lack of food consumed! Unlike most other sporting events, there was absolutely no sign of bag checks here so we were free to bring in as many drinks as we liked. No need for any creative beer smuggling schemes as has been the case in the past!

The first game was between Tohoku Free Blades and Oji Eagles and started off with a bang as the Blades ended the first period with a 3-1 lead. The teams traded goals but the Blades hung on to a 6-4 victory in an entertaining game. 10 goals already and we had only seen one game – surely the next game couldn’t top it?

The next game between the Nikko Ice Bucks and Nippon Paper Cranes was another end to end match, and just as it looked like the Cranes were going to take it 6-5, the Bucks pulled level with a goal in the final few seconds! This meant a sudden-death overtime period that was quickly finished when the Cranes scored the all important game winner to take the game 7-6.

I had decided to naturally follow my ‘local’ team for this game so was a bit disappointed when Nikko lost it at the death. The fact they had a player with the name David Bonk had nothing to do with my choice to support them. I promise.

Ask and ye shall receive. David Bonk grabbed two goals but it wasn’t enough to stop Nikko losing 7-6 in overtime!

After that exciting end to the action it was time for Glen to depart whilst Neil and I headed on down to Takadanobaba for a few jumbo G&Ts in the Hub.

By the train station in Takadanobaba we saw a young lad throwing his guts up while his mate took a piss right next to his head; I can only imagine he was a Nikko fan who turned to booze after that sucker punch of an ending to the game!

5 responses to “Goals, Bucks and Pucks at the Ice Hockey”