Despite keeping our big grand plan of surprising Fred for his birthday under wraps as well as booking a table at a great restaurant, you may be surprised to hear that our Venice plans pretty much ended there.

Perhaps unsurprisingly, the first two days involved a lot of cafe and bar hopping whilst aimlessly wandering around the streets of Venice. What else are you gonna do?! Maybe don’t answer that.

One of many stops!

However after two days of eating and drinking our body weight in pizza, pasta, beer, wine and Aperol spritz (don’t knock me ’til you’ve tried it), we decided it might actually be time to do something productive.

Now anyone who’s been to a remotely popular tourist city is no doubt familiar with the big red open top hop-on/hop-off buses that you see all over the place. These usually take in the most popular and ‘must see’ places, allowing tourists to get on and off the bus as they please.

I’m sure some tourists who hate tourists would disagree with me here, but I think they’re a great way to see the city if your time is limited…or if you simply can’t be arsed planning.

There’s just one problem with Venice: there aren’t any roads. So how do we get around this? 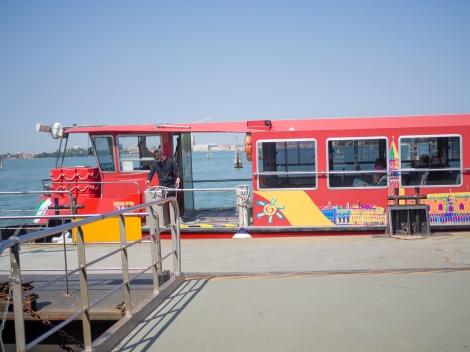 Just like the ones you see in other major cities…minus the wheels!

Unlike the buses in other major cities, these boats run to a fairly tight and slightly irregular schedule meaning that if you miss one boat you’ll find yourself waiting for about an hour until the next one shows up. Timing is of the essence here!

The first stop we made was in Lido, which is just across the water from Venice and known as the go-to beach resort in the area.

Despite having only been in Venice for a couple of days it did feel weird seeing cars and roads again, although as you can see from the picture below they were actually quite tough to spot. 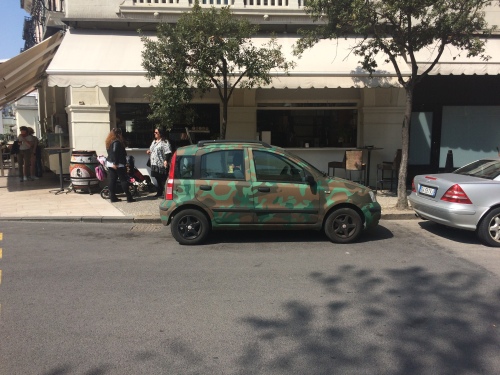 Someone left a set of tyres in the road.

None of us actually ventured into the water save for a few dips of the feet as we hadn’t bothered to bring any swimming gear with us! What was I saying about planning? Thankfully there was a beach bar close by so all wasn’t lost, plus Chris and I got a chance to practice our bartering skills on a few rugs that we didn’t want. Every cloud, eh?

How many possible ways are there to say no?

The beach itself was nothing to write home about and I was probably expecting a little more from Lido than what I got. That said, it was nice to be away from the crowds for a few hours!

By this point, the sun was bearing down on us (read: my pasty little English head) and I’d taken to wearing my jacket around my neck in a desperate attempt to protect myself not too dissimilar to the Japanese ladies I often laugh at in the street. A detour to a shaded restaurant for lunch was well and truly on the cards.

After some very welcome food we hopped back on the boat and headed to the next stop which was Murano – an island famous for glass production. There are signs for the stuff all over Venice, so it made sense for it to be produced nearby.

I’d actually been told about it the week before by a colleague and completely forgot. Apparently hastily scribbling something on the schedule for your last day of work before a week off isn’t the greatest reminder.

Mike and I on the boat to Murano. Whoever took the photo must have preferred Mike.

It’s easy to see why Murano is famous for glass as just about every shop sells the bloody stuff! There’s a glass shop for all budgets and even a €1 glass shop which seemed a bit strange. Basically a Poundland for glass!

If glass isn’t really your thing then Murano is still a nice chilled place to walk around. There’s a nice sculpture randomly knocking about too; no prizes for guessing what it’s made of. 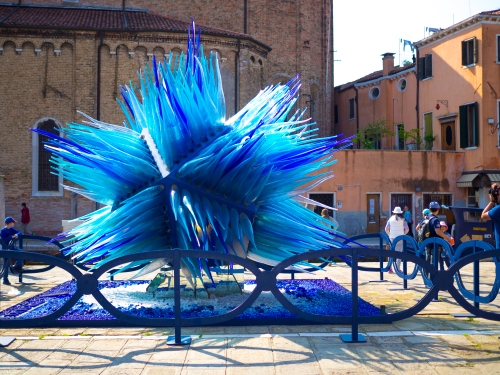 Just in case there were any doubts over what is produced on Murano.

As I’m sure many of you are aware I’ve recently become a bit obsessed with photography and – probably much to the annoyance of the rest of the party – my brother Mike and I spent most of our time slowly wandering around taking pictures of anything and everything which in turn held just about everybody up.

Whilst going about my business on Murano however, I feel like I completely justified all my slow walking with what is probably my favourite picture of the holiday. Absolute winner!

It’s a tough life at times…

Seeing as our apartment was walking distance to San Marco Square, we didn’t visit it on this boat but we did on multiple occasions over the week. In fact, during one particularly jetlagged morning I took advantage of the empty square to score a few Facebook and Instagram likes. 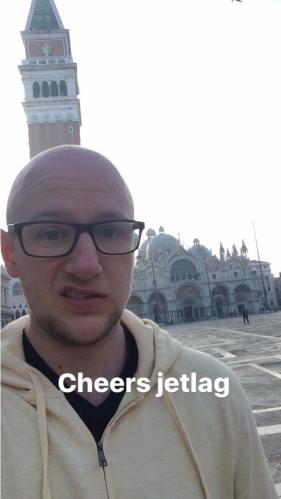 We ended up getting off the boat at Zattere. We didn’t know a great deal about this area and I think we were all quite pleasantly surprised at what we found. Of course, we decided it would be best to stop for a drink or two first before exploring any further.

We were on something of a mission to avoid San Marco at this point, so we ended up wandering semi-aimlessly through the winding streets in the general direction of our apartment. What we found seemed to be a popular spot for young people to hang out and drink along one of the walls of the canal. It looked a lot like the place to be if you were a skint student – or a skint EFL teacher! 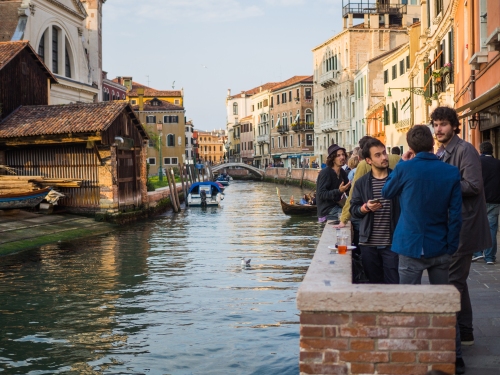 With San Marco avoided, we were on the home straight and that was us done for the day! The following day we decided to take the boat to the other stops; there really wasn’t a great deal to write home about but a least we got our extra €7 worth. You can take the boy out of England…!

7 responses to “Venice by Boat (Is There Any Other Way?)”