With the exception of Summer Sonic when I first arrived in the country, music festivals in Japan are something that have largely passed me by.

Working Saturdays doesn’t help as it means doing the full weekend at Fuji Rock isn’t possible without booking the day off way in advance, and I’m more of a last minute guy. That said, having seen the Fuji Rock lineup for this year I wouldn’t say that’s necessarily a bad thing!

One of the many wonderful things about living in Tokyo though is that there’s always something going on at the weekend. It might not always be great, and you may have to search for it, but if you dig deep enough you’ll probably find something that takes your fancy. Thankfully Adam (who you may remember from the Japanese Grand Prix and the Stone Roses gig) had done some digging and last weekend suggested we head to the Tonofon music festival in Saitama.

Not your average festival site!

After a heavy night of nomihodai and darts which may or may not have ended with me hugging the bowl with my head down the toilet at 2am, I arose bright and early to meet Adam and Rob at Koku-koen station for 11.15am.

The first band weren’t due on stage until 1pm and the doors didn’t actually open until 12.30pm, so we took a wander around the park and settled for some lunch in the nearby Aviation Museum. We got a few curious looks from workers and families with children, but it was a quick in and out at the cafe and I can seriously recommend the curry if anyone happens to be passing! 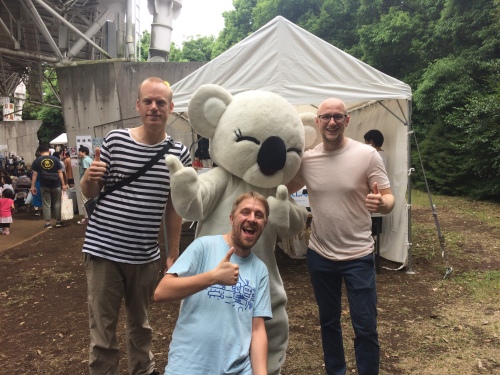 I honestly think I could write a book about the weird and wonderful things I’ve seen in Japan (because I’m sure no one’s ever written one of those before…) but it was just after lunch that I witnessed one of the more bizarre things of my two years here. Bear in mind I saw a drunk salaryman sat in a pool of his own shit in Kabukicho during my first week in Tokyo, so I don’t say stuff like this lightly.

I was playing catchup with Adam and Rob having stopped at a vending machine for a bottle of water when I saw a bunch of kids running hurriedly in one direction. No problems so far. What followed about 30 seconds later was two men probably in their 20s wearing sunglasses and black suits looking like TV villains, exhausted from running. The men stopped, looked a bit confused and set off in another direction, while the kids excitedly ran away with the help of another adult.

I presume this was some kind of roleplaying adventure thing and the guy helping the kids was the organizer or some sort of scout leader. Either that, or I just turned a blind eye to an unthinkable crime. Who knows? 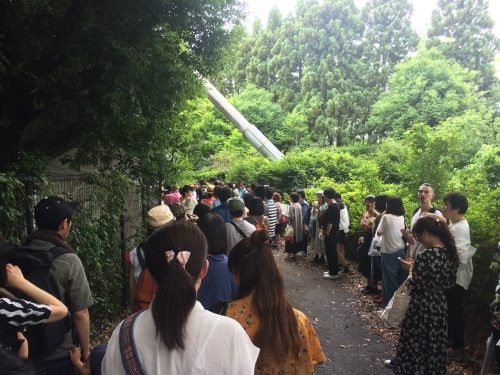 After that confusing matter we headed to the festival entrance and were greeted with perhaps an even more confusing one. The gates opened at 12.30pm and we joined the queue ready to enter, but of course this being Japan it wasn’t as simple as that. Oh no, of course not!

Naturally there was a perfectly-adhered-to entry procedure, which involved ticket numbers being called out…in blocks of 10. When we realised that the man with the megaphone was only up to number 70 and our tickets were in the 600s, we decided the best bet would be to head to FamilyMart, stock up on alcohol and try again later. 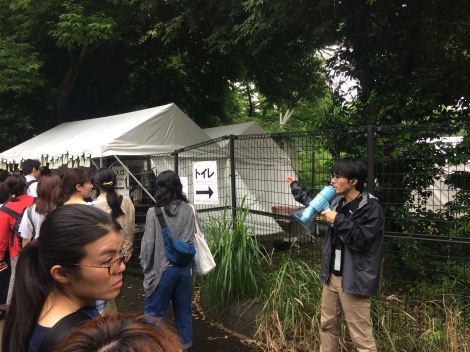 It worked, as we managed to waltz straight into the festival upon our return. For an event with such a stringent entrance procedure, we were surprised to see that there was no bag check in place and people were free to bring in whatever they pleased; and even saw a family with a tray of McDonald’s!

With a few cans of highball and beer in hand we finally got into the festival just after 1pm. This being Japan, the first act started absolutely bang on time so we missed the first few minutes of Open Reel Ensemble.

Having YouTubed them I had an idea of what to expect, so wasn’t surprised when I saw three blokes essentially pressing buttons and fiddling around with a load of tape reels. If that sounds negative I can assure you it wasn’t; it was perhaps one of the most unique – and hipster – things I’ve ever experienced. I enjoyed it too. What have I become?

You really need to watch this video, by the way.

The next act slowed down the pace a little bit, as singer-songwriter Kensuke Ide and his band took to the stage. Any fears that the hipster quota wouldn’t be met were allayed by the presence of a man in sunglasses with his legs crossed, sitting on a chair playing slide guitar on his lap.

The music was slightly Damien Rice-y, with a hint of Arcade Fire’s slower moments. Not bad, if not a little unspectacular.

Adam had been harping on about these during the week building up to the festival, so I’d given them a bit of a listen and they seemed like the most ‘normal’ of all the acts. By that of course I mean it was a bunch of blokes with guitars making landfill indie reminiscent of the mid-noughties. Again, not a negative.

It seemed Adam wasn’t the only one excited by these, as for the first time all day the crowd actually got up and piled to the front of the stage ruining our lovely seating arrangement on the floor mats at centre stage! Still, a mixture of last night’s alcohol being topped up and a more enthusiastic crowd made for a much better atmosphere. 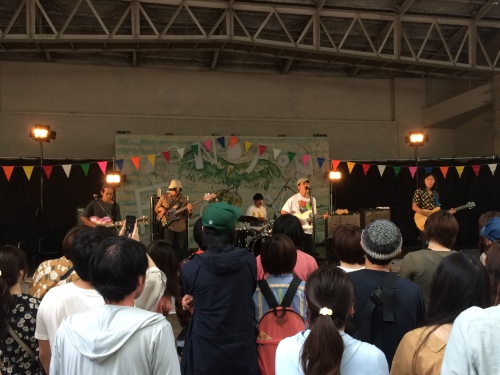 If there’s a Japanese equivalent of the NME, these guys should be in it.

Throughout the day it was hard to tell when a band was actually starting and when they were soundchecking, as they tended to just take to the stage 10 minutes early, play a few tunes then walk off again! This happened with Never Young Beach, and the majority of the crowd were getting right into it before the band put down their instruments, walked off then walked back on and introduced themselves a few minutes later! Bizarre.

I’ll admit I went into this one expecting very little yet to my surprise, at the end of Nikaido Kazumi and the Gentle Forest Jazz Band’s set I had a feeling they wouldn’t be topped.

The signs were there early on: a jazz band in full suits joined by an extremely hyper woman in a big puffy white dress with angel wings – what’s not to like? Adam said she was like a Japanese Bjork and it was hard to disagree.

The highlight of the show came when she jumped into the crowd and just walked and danced her way around for a good few minutes shaking hands – a move I would later regret as she had one of the firmest handshakes I’ve ever been on the receiving end of!

The final act of the day was festival organiser and semi-international star Shugo Tokumaru, who I knew a little bit about from YouTube again. 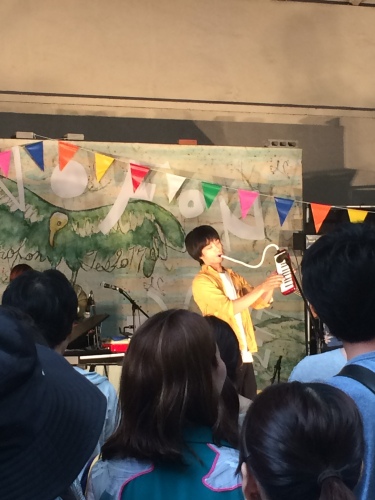 I won’t lie, by this point I was quite drunk and I don’t remember a great deal about his set. I do remember it being extremely hipster and I seem to recall a guy playing the guitar with a violin bow at one point (although this may have been with Kensuke Ide’s band – I honestly can’t remember) while someone else played the accordion and held a puppet up to the microphone. Certainly unique, I’ll give them that!

Do not adjust your monitors, that is exactly what you think it is.

With that the festival drew to a close and it seemed to be over in no time at all. My only complaint would be that all the sets were too short, with acts (including the headliner himself!) barely playing more than 20 minutes each. Particularly in the case of Never Young Beach, the crowd seemed to be just getting really into it when they finished their set. Still, you can’t grumble with five bands for ¥4,500!

In a rather unusual twist for me, I thought I’d finish on a deep, motivational note. There’s a lot of negativity around at the moment, and I think we could all benefit from trying to live our lives as happily as Adam at a small, hipster music festival on the outskirts of Tokyo.