After seeing all there was to see and eating Hakodate out of seafood, it was time to head up to Sapporo for the second and final stop of my holiday.

Now I’ve been known in the past to do things on the cheap, especially when it comes to getting around Japan. I’ve taken overnight buses to both Nagoya and Nagano because I refuse to pay the extortionate shinkensen (bullet train) prices and my experience has always been pretty positive.

However with timing being of the essence on this short trip I opted to bite the bullet and splash out just over ¥8,000 for a train from Hakodate to Sapporo. The bus would have taken a few hours longer and I wanted to make the most of my few days in Sapporo.

As it happened, I ended up next to a lovely old lady who insisted on feeding me all kinds of weird and wonderful fishy snacks she’d picked up in Hakodate. To be honest, I was just happy that an old dear saw a white skinheaded bloke drinking beer on his own and didn’t respond with a filthy look! The food was a bonus!

How to make a four hour journey fly by.

After checking into the awesome Waya Guesthouse (more on that in a future post) I set about finding my number one priority for this entire trip…you guessed it: food!

As per usual I had a list of food I was keen to try and perhaps top of the list was jingisukan (named after Genghis Khan!), or barbecued lamb to you and I! Although I’ve eaten jingisukan a number of times in Tokyo, I’d been told that it was much better in Hokkaido.

A quick scan of Google suggested that Daruma was a popular spot and they seem to have a few branches all over the city. I opted for that shop on 4-chome and was a little concerned having read that as soon as the place opens at 5pm the queue is usually halfway down the street! 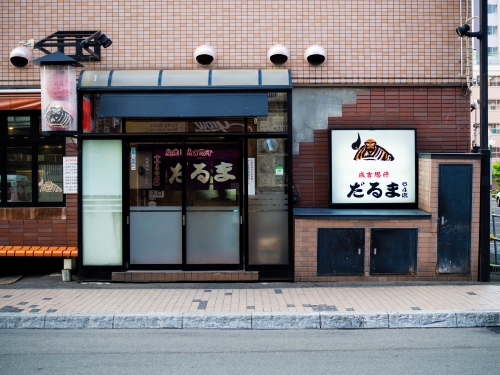 Fighting my way through the crowds.

I arrived at the restaurant at 5.15pm and was surprised to see no queue! So far so good. I was even more surprised when I went inside to see that the place wasn’t even half full. Who knew you couldn’t believe everything you read on the internet?

Basically you’re given a choice of two cuts of lamb when you go in and, not knowing a sheep’s arse from its leg, I asked the waitress for her recommendation to which she very helpfully responded ‘both’. Challenge accepted. I ended up trying both cuts and ordered a large beer too, when in Sapporo and all that.

Now when I say a large beer I expected something like a pint size glass; it seems me and the restaurant had very different ideas as I was served with a glass of beer that was almost the size of my leg! Again, challenge accepted.

Those cuts of lamb were not small, either.

I love the whole Japanese barbecue experience of cooking your own food at the table. It’s even better when it’s lamb which, I’m sure you’ll agree, is the king of the meats.

The servings weren’t huge but two plates along with a bit of salad (fried, chopped onions) was more than enough. For two plates costing about ¥1,000 each and a (massive) beer, the total bill came to about ¥3,500 if memory serves. Not the cheapest, but worth it.

Still getting the smell of this out of my clothes now, but so worth it.

By the time I left around 6pm the place was starting to fill up. Maybe the internet isn’t full of lies after all.

Another Google recommendation, this popular sushi shop located above Sapporo station seemed to be the place to go for seafood.

Once again the internet warned me of snaking queues, especially at lunchtime, so for some inexplicable reason I decided to go there at bang-on midday. I think I was feeling cocky after my Daruma experience the night before.

Looks like I wasn’t the only one craving sushi.

When I arrived I took a ticket from the machine (sign of a busy restaurant, no?) and noticed they were currently calling out number 62. My number? 96. Joy. I plumped myself in a chair at the back of the seating area, which was essentially a fishy doctor’s waiting room, and waited patiently for my number to be called.

One hour and countless belly rumblings later, it was my turn and I was seated at the counter. The first thing that struck me was how noisy the place was – it felt like the chefs were having a competition to see who could reach the highest decibel! All part of the experience, I guess. 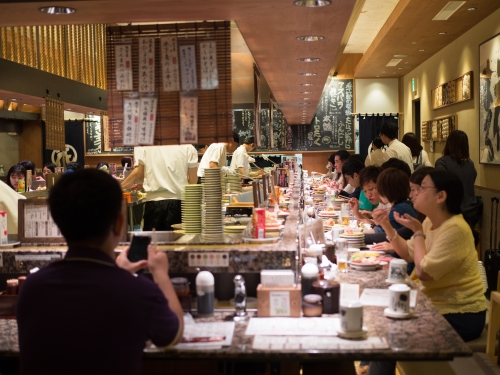 Packed to the rafters!

In my famished state I wolfed down about 10 plates in no time, trying various types of fish ranging from the cheaper salmon fare to the more expensive cuts of tuna and other stuff I can’t remember the name of!

It was a good experience, although I have to say sushi generally tastes good to me regardless of where I get it from! I’d certainly eat there again but the one hour waiting time wasn’t particularly justified. After settling the ¥2-3,000 bill I was on my way and it was someone else’s turn to hear their lucky number called.

Good, but not sure it was worth an hour’s wait!

Ramen Yokocho, or ‘Ramen Alley’ as it’s often referred to, is very self-explanatory. It’s basically a small alley with a shit-load of ramen shops, in case you were somehow confused.

Having heard a lot about this famous alley I perhaps expected something a little more than the small, dingey little side street I was greeted with. That said, I’ve always been a fan of small, not so appealing eateries on my travels as they often seem to serve the best food!

The rather self-explanatory Ramen Alley.

I arrived here around 6pm and it was basically a case of trying a random shop and hoping for the best. I was fairly certain I wouldn’t struggle to find good ramen on a street famous for the stuff, so I just gambled on the emptiest shop!

I opted for the shio ramen, which is a Hokkaido speciality with salt flavored stock. Doesn’t sound the most appealing but I trusted the locals’ recommendations. It was decent enough, but I’m still more of a fan of miso or tonkotsu (pork) ramen and it certainly wasn’t a patch on the milk ramen I tried in Himeji! 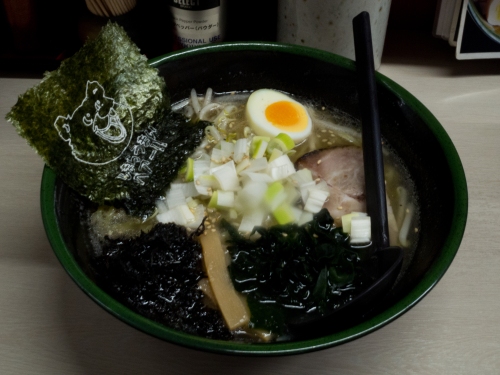 It came with a cute teddy bear picture on the nori, if that floats your boat.

Finally an honourable mention must go to the jingisukan plate I ate in a sleep-deprived, hungover state at Sapporo Chitose Airport on the day of my departure.

What a way to end five days of taste sensations!