There are some sights that you just have to see when you visit an area. Just like you can’t visit Cambodia without seeing Angkor Wat, or go to Xi’an and skip the Terracotta Warriors, it would be criminal to be in northern Italy and not pay a visit to the leaning tower of Pisa.

I made the short journey from Florence to Pisa with my hostel mates Aussie Steve (who you may remember from the Fiorentina game), French Charlotte and American Hayet and dropped my bags at my hotel (not a typo – got to treat yourself every now and then!) before heading to the tower. 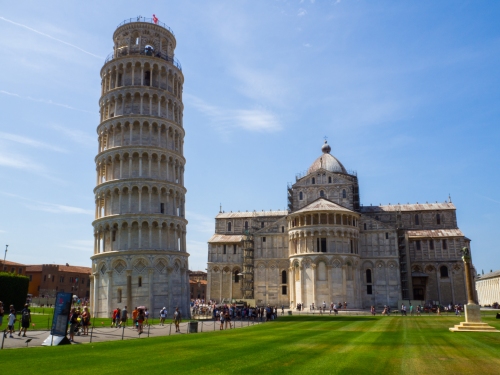 Many say that there’s very little to do in Pisa aside from the tower and it can be done in a day trip. The others planned to head back to Florence after visiting the tower but I was quite happy to stay have a quiet night – the free sangria and drinking games at the Florence hostel had taken their toll!

It’s pretty much a straight walk from the station to the tower although surprisingly we almost managed to miss it. It’s nowhere near as big as I thought it would be and doesn’t stand tall above any of the buildings until you get quite close. We actually took a wrong turn before one member of the group saw it by chance down another road! 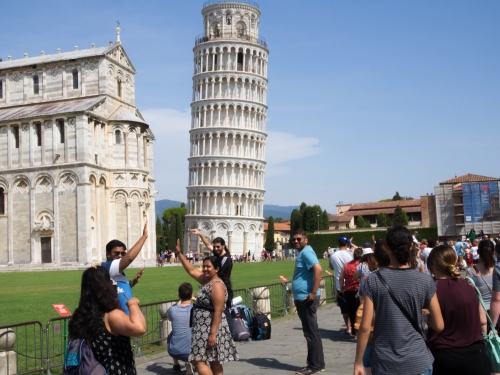 The reality of a trip to the Leaning Tower!

Instantly when you get to the tower you’re greeted by masses of people taking pictures in one of a number of poses, with the most popular being holding the tower up as it looks like it’s falling onto you.

Now I’m not a tourist who hates tourists, far from it, but I am something of a killjoy when it comes to stuff like this! Steve, on the other hand…

Around the other side there’s a nice cathedral. We didn’t go in but took some time to chill in the shade before getting a drink and bidding farewell as the other three made their way back to Florence.

As I said I was more than happy to have a chilled night and as well as treating myself to a nice private room in a hotel I set about finding some good food too.

A quick search on Google pointed me in the direction of Numero Undici (11) – a popular spot with locals and tourists alike.

Apparently it’s much busier later on!

The restaurant is quite unique as there’s a more communal vibe with the long tables and you just sit wherever you can find a space. I actually went a little early and had a smaller table to myself, but I can imagine it’s quite a unique experience when it’s rammed!

There’s also no service, which means you just order your food, grab your own cutlery, sauces and glasses then wait for them to call out your order. You also clean up after yourself, which luckily I have plenty of experience of doing from my time in Japan!

As I said I was having a bit of a rest and treat day so I ordered a pecorino cheese board to start which was absolutely spot on. I’m not really a fan of all this fancy presentation and the chutney/jam in a spoon was a bit much, but absolutely no complaints about the food!

So good I can even forgive the fact part of it was served in a spoon.

The main event was what had me excited though as I’d ordered a rare (take that look off your face) sirloin steak with potatoes. As I said, it was a treat day.

My order was called out and it didn’t disappoint as the steak was cooked to perfection, and by that I mean it pretty much just looked at the pan and got thrown on the plate. Just how I like it. The sauce that was served with the steak was fantastic, however the member of staff I asked wouldn’t tell me what was in it as it’s a secret recipe. Apparently they don’t tell you, but if you guess the ingredients they’ll say yes or no. I failed miserably. 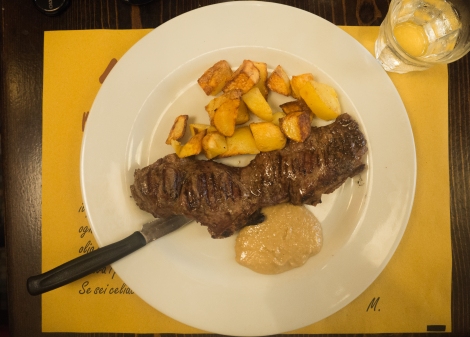 My order was rounded off with a can of Orangina which actually turned out to be the much more pretentious San Pellegrino. I don’t know what I’ve become. For the cheese board, steak and can of pretentious nonsense I paid a grand total of €25 – not bad at all!

With the treat aspect taken care of it was time for the chill side of things. Unfortunately my hotel room had no air conditioning, so despite being relaxed it was impossible to literally chill. Ah well, swings and roundabouts I guess.

One response to “A Leaning Tower? You’re Taking the Pisa!”