Up until moving to the Basque Country my only knowledge of Gernika (or Guernica) was the painting in the living room in of my childhood house and this Manic Street Preachers song:

A quick bit of reading would suggest however that, as usual, I was completely under-educated on the subject as Gernika was in fact largely destroyed by German bombs in 1937. As a result (according to Wikitravel anyway!) the town has become ‘an important symbol of Basque culture and identity’.

With me attempting and highly likely failing to have a ‘dry January’, this month seems as good as any to get out and explore the towns and cities of this beautiful country I live in. My housemates Laurence and George aren’t foolish enough to delude themselves into thinking that they’ll go a month without booze, but were still up and fresh for a midday(ish!) train and we were on our way.

My best “this 0% beer is really nice, honestly…” face.

The journey involved a 50 minute transfer in Lemoa, another town I knew very little about but we decided to kill two birds with one stone and use this time to explore there too. As it happened, 50 minutes were about 45 too long!

Home to a factory and about 3,000 people, I imagine there’s not a great deal that brings people to Lemoa. After a bit of wandering we found something resembling a main street and killed some time with a coffee before heading back to the station. Nothing ventured, nothing gained as they say! 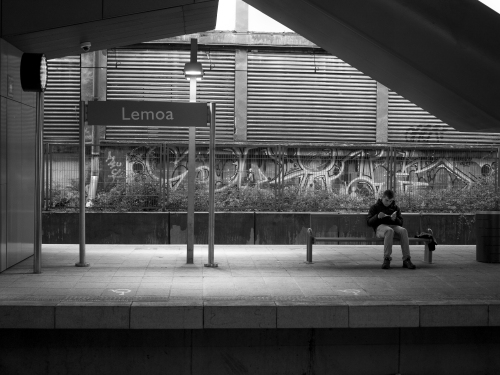 The best thing about our time in Lemoa was getting this shot.

We finally arrived in a very rainy Gernika and set out in search of things to do. Oh, and food. George and I hadn’t eaten at this point, while Laurence had done my usual trick and woken up next to a kebab and polished it off before we left. If that’s not a case for me stopping dry January then I don’t know what is.

As expected, having arrived in the middle of siesta time everything except bars and cafes were closed. Not to worry, food and drink were also on the agenda so we were more than happy to kill time in Picasso bar on Pablo Picasso Kalea (Street, and yes, seriously).

4pm rolled around and we headed on up to the Assembly House and its famous tree which, miraculously, survived the bombings. I guess you could say this is the Basque equivalent of Hiroshima’s dome. 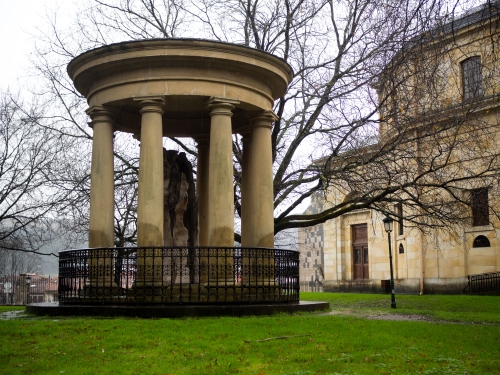 About as close as we could get to the tree!

There was just one small problem: the gates were locked! The same could be said of the Park of the People of Europe. We checked our clocks, it was definitely after 4 o’clock…and then we realised.

It was a national holiday.

The previous night we’d been out in Durango to see the Reyes Magos, where the three wise men are paraded through the streets and throw gifts out to children. Apparently it’s kind of a big deal. Anyway, the day after the parade is a national holiday, which would explain why the town was so quiet and nothing aside from bars and cafes were open. Thankfully, the was a huge print of Picasso’s famous Guernica painting out in the street, so it wasn’t a completely wasted trip. 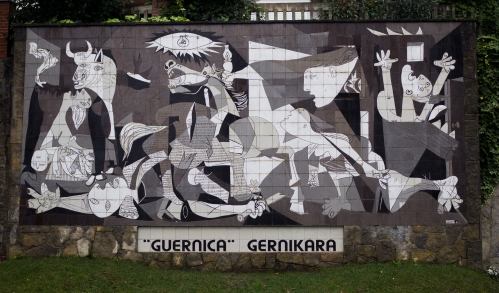 So it wasn’t a completely wasted trip!

After an ambitious visit to see if the Peace Museum was open (it wasn’t), we settled for another drink and a pintxo before taking the train home. Definitely one to visit again in the summer, preferably on a day that isn’t a national holiday!

In order to avoid another 50 minute wait in Lemoa, we opted to transfer at Amorebieta instead and walk to a station on the other side of town. Via another bar, naturally. I’ve never drank so much coffee in my life.

So three towns visited and very little seen aside from a few locked gates and the inside of a number of bars. Watch this space for a real Gernika post in the summer!

One response to “A Rainy Afternoon in…Gernika”