I can’t speak on behalf of England, but personally I find it quite hard to name more than a handful of ‘traditional’ British dishes. I’ve already written about afternoon tea (although I’d argue this is more of a novelty than a tradition!), and with Kat in town – a Canadian foodie who’s never been to the UK before – a British feast of epic proportions was most definitely on the cards. 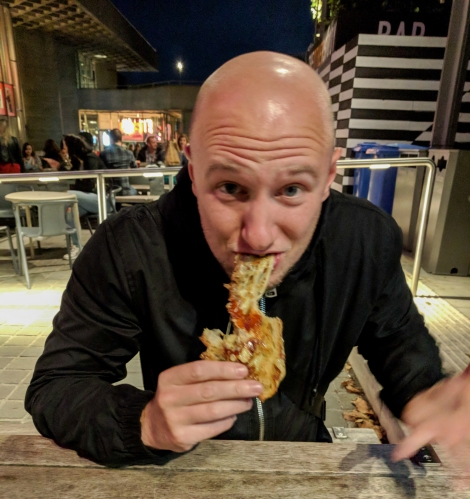 My standard position for five days!

So what exactly makes the cut when it comes to traditional British food? I think I ticked more than a few boxes – let me know if you think there’s anything that needs adding to the list!

Fresh from my night in the YOTELAIR hotel at Gatwick Airport and Kat’s transatlantic flight, we found ourselves with just over an hour to go until we could check into our hotel. What better way to introduce a newcomer to English food culture than with a pub lunch?

Caption this picture: what’s the guy in the background thinking?!

We found one of the seemingly millions of gastropubs in London – The Minories, situated under the railway tracks near Tower Hill station – and got our feed on. Kat wanted the most British thing on the menu, so I suggested a cottage pie for her and a lamb and rosemary pie for me.

Accompanied by a small portion of mozzarella bites (we’re both massive cheese-heads) to bring us into the 21st century, the hole was well and truly filled and we were off to a cracking start.

Does it get much more British than this? In fact, I’d hazard a guess that if you asked 100 people to name a traditional British dish, 99 of them would say fish and chips.

I honestly don’t think I’ve ever had a bad portion of fish and chips in England. Sure, there have maybe been times where the batter’s been a bit soggy, but it was probably still a 7 out of 10. With this in mind, I wasn’t too fussy about where we ate. In the end we settled on Gigs restaurant thanks to its semi-close proximity and notoriety as one of the best in town.

A smile only fish and chips could bring on!

Like any self-respecting British person I opted for the only real option on the menu: fish, chips and mushy peas. The creme de la creme of British meals. The service was quick, the batter was crisp and the prices were reasonable. Two portions of fish and chips, a portion of peas and a couple of drinks came in at £33. Not bad for London.

It might be cheap, it might be a little lukewarm and limp from time to time, but you’d be hard-pressed to find a better value, quick eat than a Gregg’s pasty.

Something of a British institution, you can hardly move for branches up north, however they seem to take a backseat to Pret a Manger in London. Lah-dee-dah. That said, there are still plenty knocking about so that’s where we headed before our afternoon tea. We really did reach both ends of the spectrum that day – and that’s without mentioning dinner at The Ivy!

As cheap and cheerful as it gets.

On my recommendation Kat went for the steak bake and I stuck with the old faithful: sausage, bean and cheese melt. Never lets you down, I tell thee.

We even went back a few days later for a sausage roll and a beef and onion pasty! More Gregg’s in a few days than I’ve had in about 3 years.

Yes, you did read that correctly: Wetherspoons.

Similar to Gregg’s, no visit to the UK is complete without a trip to the local ‘Spoons. With pints flowing from 9am (and some costing less than £2 up north!) and the sausages probably on rotation since well before that, where else would you rather start your day?

Just count how many items are on that plate!

It may have a reputation for being a bit rough, but I honestly don’t think you can beat a Wetherspoons brekky. Sausage, bacon, hash brown, beans, eggs, mushrooms and tomatoes all for less than a fiver. Can’t say fairer than that.

I may have got Kat onboard the mushy pea train, but sadly she drew the line at baked beans. Ah well, all the more for me.

Sunday lunch, Sunday dinner, roast dinner, Sunday roast…whatever you call it, this is quite possibly the king of the dinners and I’m ashamed to say I almost forgot about it until we were reminded by Kat’s friend. Thanks Toshiko!

After a rainy day spent browsing Harrod’s and Oxford Street, I set about finding a pub for Sunday dinner. We were spoilt for choice and for no real reason we opted for The Crown and Two Chairmen. We both went for the lamb roast, which came served with the standard roasted veg, Yorkshire pudding (another first for Kat) and gravy. A little bit too much gravy for my liking, but the meat was cooked to perfection and I was once again reminded of how simple yet wonderful Yorkshire puddings are. I instantly thought to see if there was anywhere we could get a ‘Yorkshire pudding burrito’ that seemed to go viral last year, but sadly they weren’t open until Wednesday for some reason – the day after we left.

So desperate were our cravings for scotch eggs last year that my mate Matty (who also lives in Spain) and I pleaded with our friends to bring a pack over when they visited Bilbao for my birthday. There’s just something about a boiled egg encased in ground sausage meat and breadcrumbs. I’m not entirely sure what that something is, but it definitely exists.

We grabbed one from the deli section of a Sainsbury’s and it was exactly what you expect from a scotch egg. Pretty much how I described it above. A perfect introduction to a near-perfect foodstuff. 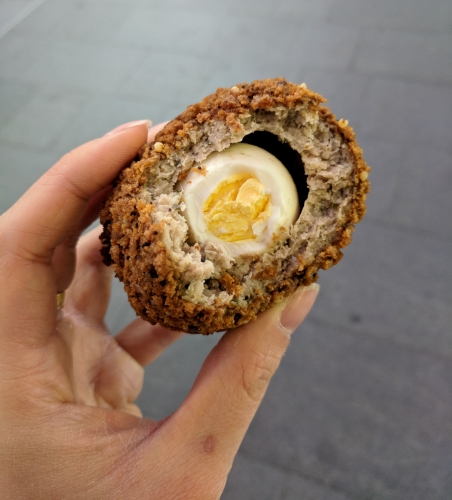 What we weren’t expecting, however, was to order it in a bar on the last night. After wandering around/being crushed at the Notting Hill Carnival and realising neither of us had any cash (seriously, you try finding an ATM that isn’t boarded up during the carnival), we took a long walk to Warwick Avenue station seeing as all other nearby stops were out of service due to the festivities.

Tired, a little cranky and very hungry, we made our way into the city and ended up in a bar called The Spice of Life just next to the Palace Theatre where we decided to order a few small plates to share. Alongside grilled halloumi, camembert (told you we loved cheese) and sweet potato fries one other item on the menu caught our eyes; yep, a scotch egg.

Despite being a big fan of the bog standard ones, they weren’t fit to lace the boots of this particular scotch egg. Well, assuming scotch eggs wear boots, which I’m pretty sure they don’t. Yolk was runny, the casing tasted of actual sausages, and the accompanying piccalilli went down a treat. Outstanding.

There was, of course, plenty more consumed over the five days; I reckon put together a decent taste of Britain though with these essentials. What do you think?

2 responses to “Six Essential Eats When Visiting The UK”