It’s no secret that one of my favourite things about Japan is its food. From the standard sushi and yakitori to the more bizarre stuff like the poisonous blowfish fugu and even raw chicken – if it’s on the menu I’ll give it a go and probably like it!

The problem I’ve often found is that the food in Japan that receives the most hype often lets me down. I’ve never quite got over the disappointment of Nagano soba, and the famous ramen I tasted in both Hakodate and Sapporo was just ‘alright’.

Upon arrival in Tokyo I quickly checked into my hotel in the Sugamo area of the city and grabbed a bite at the nearby Sushi Zanmai – a chain that I somehow didn’t manage to eat at during the two years I lived in the city.

Inject this into my veins.

Unbeknownst to me my area of choice is actually known as ‘Harajuku for grannies’ as Glen the Tokyo Fox himself pointed out to me when I told him. Seeing as I’m a man still in my 20s I thought the area probably wouldn’t have much to offer me, but then he mentioned Michelin star ramen!

A quick Google search did indeed show that Sugamo was home to Tsuta – which is apparently the world’s first Michelin star ramen restaurant – and it was just a couple of minutes away from my hotel and Sugamo station. Result. 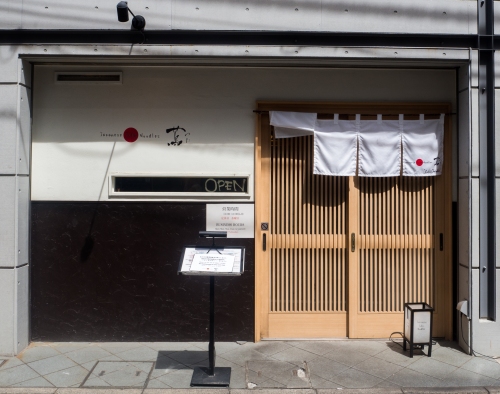 Blink and you’d miss it!

It’s a small set-up. There’s only nine seats inside and word gets around so there’s actually a ticketing system in place. The shop is apparently open from 8am and serves ramen in allocated time slots at 11am, 12pm, 1pm and 2pm with different colour coded tickets for each time. After 3pm tickets aren’t necessary.

I arrived at around 9.30am and found the shop to be empty of customers – just the chefs setting up for the day. I got a ticket for 12pm (in exchange for a ¥1,000 refundable deposit) and there seemed to be quite a few left although it looked like all the tickets for the first sitting at 11am were gone.

My ticket to Michelin star ramen!

I made my way back to the restaurant a few minutes before midday and was surprised see nobody stood outside. Unfortunately I hadn’t managed to beat the crowds; there was a silent queue of about 15 people waiting patiently round the corner! I was clearly out of practice after a year away from Japan!

At about 12.10pm a member of staff came round, collected the tickets from the first few people in the line and gave back their ¥1,000 deposit. These people were then invited in to place their orders before coming back out and joining the queue again. Unfortunately for me, the guy in front was the last person to make the cut for this first sitting!

And there was me thinking I’d got there early!

I had to wait a further 10 minutes or so before I was called in to place my order at the ticket machine. I opted for the char siu (pork), wonton and miso ramen as the other two ramen choices were either salt or soy-based.

Upon placing my order and paying I handed my ticket to the waiter and was asked to go and queue outside again. 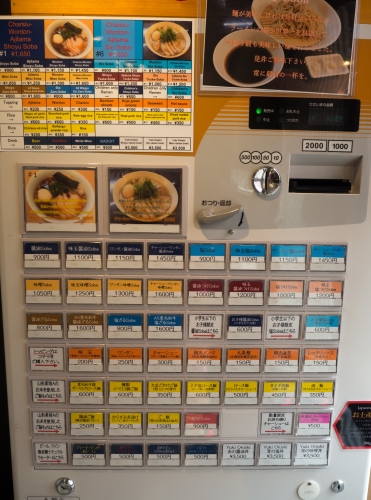 The customary ticket machine, plus an English translation!

The people in front of me were called in sporadically to eat, and in total I had about a half an hour wait between ordering and being called back in. I was eventually seated at 12.50pm, so the process of queuing, ordering and eventually eating took about 50 minutes in total.

I was expecting seriously good ramen after a 50 minute wait! 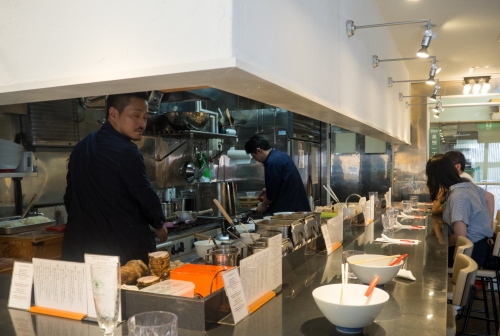 As I said, not the biggest of establishments!

There were four of us called in and our places were already set at the counter. Four bowls were laid out behind the counter with two chefs adding bits and bobs simultaneously like a well-oiled machine. It was quite interesting to see the chefs working together and it was happening at such a pace that it was seriously impressive to see them not mess it up!

The broth was rich, the noodles were slightly al dente and the pork was nice and tender. It was a good bowl of ramen. However, considering it cost twice the price of an ‘average’ bowl, I’m not sure it was twice as nice.

A long time in the making, but finally a bowl of Michelin star ramen!

It was still damn tasty though, and I found myself polishing off every last drop of the soup. I wasn’t too sure of the etiquette; I’ve no qualms with lifting up the bowl and slurping the remains in a normal place, but was such a thing acceptable in a Michelin star restaurant?

I looked around to see what the others were doing – waiting for someone to slurp, in other words. I only saw people drinking (do you drink or eat soup?) from the spoon. Maybe I’m more suited to the cheaper places.

On the subject of ramen, if you want something slightly different (and cheaper), I couldn’t recommend Mensho Ramen higher if I tried.

I’m an absolute lamb fiend, and the idea of a lamb-based ramen was too much for me to resist. Situated just a few minutes from Kasuga station and Tokyo Dome, this is well worth a detour for any meat lover.

My ramen, a lamb stock topped with perfectly cooked slices of meat and egg as well as much more, cost ¥1,050 and was served up in just a few minutes. 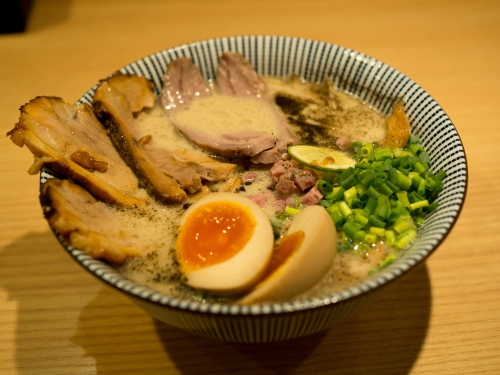 For me, tastier and better value for money than Tsuta’s ramen…providing you like lamb, of course!

It’s cheaper and, whisper it quietly, may just be better than the Michelin star fare served up at Tsuta. Seriously.

4 responses to “Slurping Away at Sugamo’s Michelin Star Ramen”