One of my aims for my second year in Durango is to spend less time and money on going out and explore more of the local area. Optimistic, I know.

I’m lucky to have such beautiful mountains and scenery on my doorstep, and I already spoke about it a little when I visited Atxondo earlier in the year. The summer holidays and general laziness have got in the way of me exploring much more but when my friend Elene asked if I wanted to climb Anboto one Sunday morning I was most definitely in.

Doesn’t look too bad…does it?!

Anboto is one of the most noticeable mountains in the Basque Country and can be seen from miles away. Standing at 1331 metres high it’s not quite Mount Fuji but it’s certainly not one to be sniffed at. It can be accessed through the beautiful Urkiola national park and the drive up the winding road from Durango is a sight worth seeing in itself!

A quiet Saturday night and a 9.30am start on a Sunday (day of rest? Pah!) set us on our way. I was actually surprised when we got to Urkiola to see just how many people had the same idea as us. I suppose everyone was looking to make the most of the last few sunny weekends before the inevitable months of grey skies take hold!

Even the cows were up for an early morning stroll.

Even more surprising was the amount of people coming past us in the opposite direction! Had they already climbed the mountain? I was quite proud of waking up at 9am on a Sunday – I dread to even imagine what time they’d got up.

Upon starting the climb we were already above the clouds which was, of course, a photo opportunity not to be missed. It was a little nippy so the decision to take a jumper was a wise one!

Just a couple of minutes into the hike!

As you start the walk to your left there’s series of peaks (if this is what you call them – I know bugger all about mountains) which apparently resemble a witch. Mari, as she’s known, is apparently lying down with her head on the left. See what you think?

Ok, hands up who can see a witch?

It’s all plain sailing to begin with, with a few ups and downs on the grass to get you eased into it. After that you reach a tarmac/gravel path where you’re faced with the option to go either left or right.

We opted for right and before long we found ourselves scaling a more uneven surface of rougher rocks with a fairly steep incline. I’m not sure what we would have found had we gone left but I can only imagine it would be much more of the same. Eventually we came out from under the shade of the trees but what followed was much of a muchness. 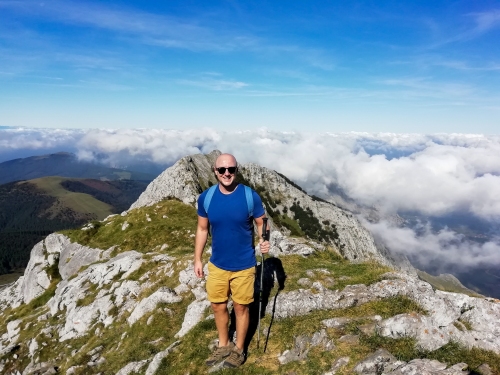 One of many pictures taken at the top!

We were almost at the peak by now and the terrain was so smooth it was actually quite slippery. So much so that the people coming back down had a rather amusing technique of sort of shuffling along on their arses instead of using their feet!

A number of people decided to call it a day here and waited while the rest of their group continued to the peak. Three of our group of four carried on and we eventually reached the mountaintop after another 10 minutes of semi-precarious scaling! 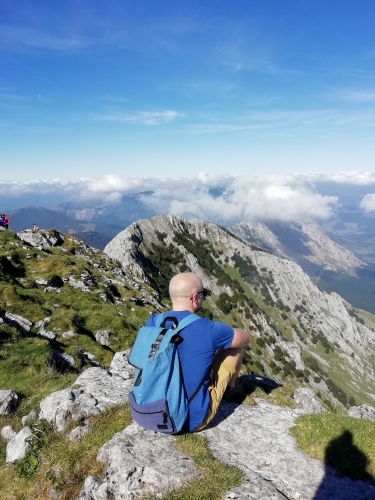 Have you even climbed a mountain if you don’t take a picture like this?

The views were incredible and even though it was a cloudy day you could still see quite a few of the surrounding towns. Rumour has it that you can even see the sea on a clear day!

It was interesting to see the mixture of people at the top. Some had just come to say they’d done it, get a picture and crack on with the descent; others seemed to be in a more reflective mood. One guy was sat at the edge looking straight ahead for the entire time we were there! 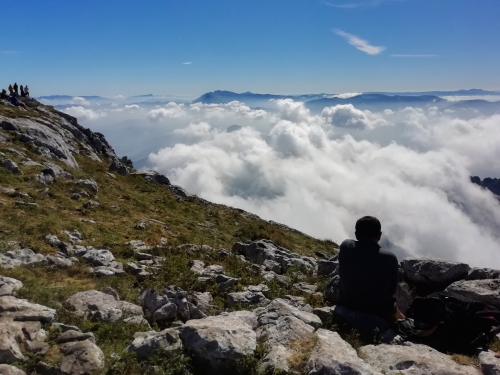 A moment for contemplation.

As was the case with Mount Fuji the descent was by far the worst part. The jelly legs started to kick in and all I could think about was sitting down and knocking back a nice cold beer. Why does the way back always feel a lot longer?

Despite feeling like it was never going to end it eventually did and before I knew it we were sat down with a refreshing caña and my legs feeling nice and stiff.

It’s amazing what you can do when you’re not hungover.

2 responses to “Basque-ing in the Sun: Anboto”