After a morning of exploring (or aimlessly wandering around with my camera) Dusseldorf, I jumped on a train at around 1pm and made the short 40 minute journey to Cologne.

My plan was once again very vague and my intention was very much to do the same as I had the previous night: drop my bags and let Wikitravel do the rest. My only aim for the day was to sample the local beer ‘Kölsch’, which is said to be the rival to Dusseldorf’s Altbier.

So with my hotel checked into and my bags dropped off, what would I do first? Beer? Sightseeing? Erm, not quite… 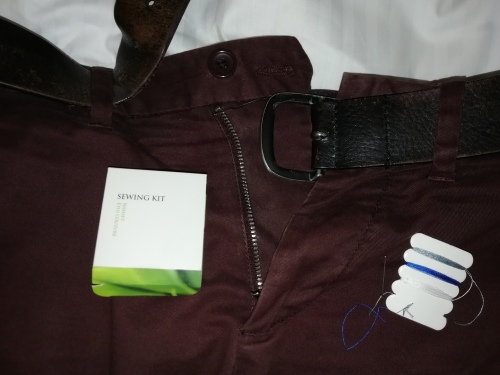 Ever looked at those sewing kits you sometimes get in hotels and think “Who actually uses those?!”. The answer is me, apparently, as I’ve been needing to sew a button back onto my jeans for about a month. It was a heavy summer, guys. There’s a first time for everything though and I was surprised at just how straightforward the whole thing was! Let’s see how long it lasts.

I set out with a spring in my step thanks to my newly-found prowess and headed towards the Kolner Dom: the city’s main cathedral. 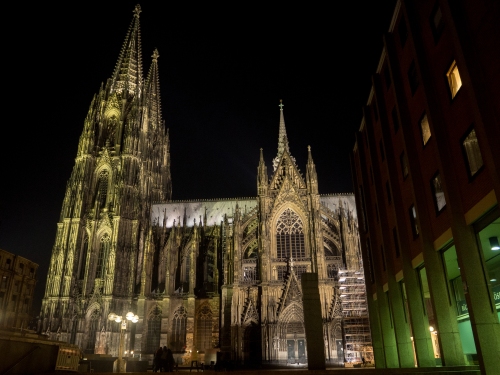 My night pictures were better than my day pictures, so…

It’s impossible to miss, even if you don’t know where you’re going as it’s bloody huge. Apparently you can climb to the top of the tower but as I only had a day here I didn’t fancy spending an hour of it working up any more of a sweat than I’d already planned!

A few pictures and I was on my way. I’d heard that the eateries around the cathedral were tourist traps, so I decided to venture a little further out of town and found myself at Max Stark, via some medieval town gates or something. 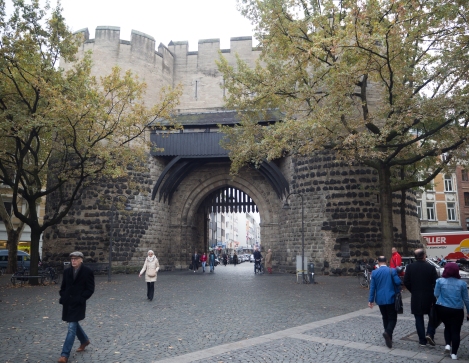 Very nice and all that but where’s the food?

The place was booming but luckily I managed to get the last free table and quickly sat down with a beer and ordered myself some food.

On the subject of beer, I mentioned previously that there’s something of a rivalry between Cologne and Dusseldorf with regards to their local beers. While Dusseldorf’s Altbier was a darker affair, Cologne’s Kölsch was lighter and much more lager-like. Apparently it’s a bit of a taboo to compare the two so I’ll whisper it quietly: I preferred the Altbier.

Lighter than the Altbier!

That said I wasn’t going to turn down the Kölsch, especially when it’s brought to the table in the same way as the night before. In other words, I didn’t have a choice!

Having had food envy for about 24 hours after seeing the lady at the table next to me eating a massive pork knuckle, I was delighted to see that the Friday special was Schweinhaxe – a roasted pork knuckle. 25 minutes later it was in front of me, and all I can say is ‘good lord’. I’ll let the picture do the talking.

About half an hour later!

Put it this way – it took me longer to eat it than I waited for it and I spent a good few minutes trying to figure out my plan of attack. I finished eating around 5pm (a very late lunch!) and got on my way. Five beers and that feast came to a very reasonable €22, but that wasn’t all I spent in there as it was also the place that a very spontaneous plan was hatched! More on that here.

Fast forward to the next morning, I arose bright and early (8.30am is early, right?) and set off to finish my sightseeing. My first port of call was the Fischmarkt which, unfortunately, was little more than a small square with a few bars. My hopes for a similar fish market to that in Hakodate were sadly dashed!

I guess it’s no longer a fish market.

I wandered through the small streets and found my way to Heumarkt, another square filled with bars albeit a much bigger one! I was surprised to see a Delirium Cafe here as I was under the illusion that they were only in Brussels, but you live and learn I guess!

‘No crap on tap’ – I know a few places that need to adopt this mantra!

After a slightly underwhelming breakfast I headed to the Rathaus (town hall) and was surprised to see a huge crowd gathered outside for what appeared to be a wedding. I was half tempted to ask for a glass of champagne as there seemed to be a few going spare but it was only 10.30am and I had a big day ahead of me!

A few more pictures and I was on my way to St Martin’s church which I could see from the Fischmarkt. To be honest it was a brief stop as there wasn’t a great deal to see aside from the outside of the building!

What you see is what you get.

I was moving forward at a breakneck pace as I was keen to see the sights and head off. It has to be said though that Cologne is a beautiful city and I had a similar feeling to that from my short visit to Bruges in that I felt like I wasn’t doing it justice.

That said timing was of the essence so I quickly made my way to the Hohenzollern Bridge which is famous for its ridiculous amount of padlocks clamped onto it by loved up couples.

It was interesting, on the topic of Bruges, to see these posters all over the bridge which I initially snapped whilst in Belgium earlier this year!

I set off in the direction of my final place for Cologne and made my way along the river. It was a really nice walk which took in a seemingly newly-developed marina area which was home to companies such as Microsoft and EA. Quite the contrast from the old town!

After about a 25 minute walk I finally reached the place I was looking for, although it wasn’t exactly in the condition I expected. 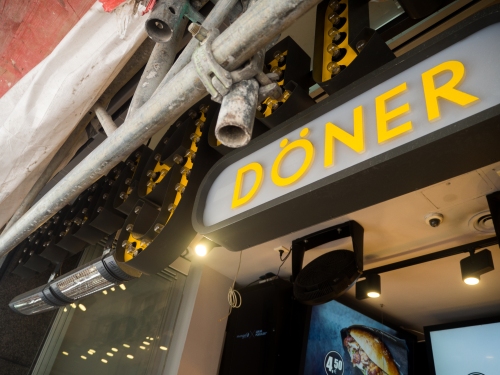 Blink and you’ll miss it!

This may mean very little to anyone but listeners of The Guardian’s Football Weekly podcast but since arriving in Cologne I’d been keen to visit Mangel Doner – a kebab shop owned by former FC Koln, Bayern Munich and now Vissel Kobe striker Lukas Podolski.

The place was much smaller than I imagined and although the queue was out of the door, this only really meant there were three or four people in front of me.

Very much a takeaway place!

As you can see there wasn’t a great deal of room inside so I quickly got my €4.50 doner kebab and made my way to a nearby bench. I’m not just saying this but it really was good and for the price it’s hard to think of a better value kebab when you consider some of the filth we throw down our throats at 4am on a normal Saturday night!

I’d be interested to know if the place was as popular (and good) before his involvement or if it even existed before, as it seemed to be drawing a lot of attention and most customers were, just like me, taking loads of pictures!

With a full stomach I made my way to the station and made tracks for the third and final city on my trip: Leverkusen!