I arrived in Germany, actually scrap that, I arrived in Cologne having never heard of the city of Krefeld. What a difference 10 minutes can make!

Whilst chowing down on a ridiculously big pork knuckle in Max Stark during my one day in Cologne, I had a sudden thought.

I found myself on the website of the local team – Kölner Haie – within seconds. Away. Damn. Could I return to Dusseldorf just hours after leaving? Nope, they were away too. I found myself Googling places like Ingolstadt (200+ miles from Cologne) and Mannheim (over 100) before stumbling upon Krefeld – a short 30 miles away. Bingo. And they were playing at home to Dusseldorf, surely that would be a derby of sorts, wouldn’t it?

No more convincing needed. My card was out and I was buying a ticket online. For €20 I got a seat in a corner and it was settled. I was Krefeld-bound for the night! 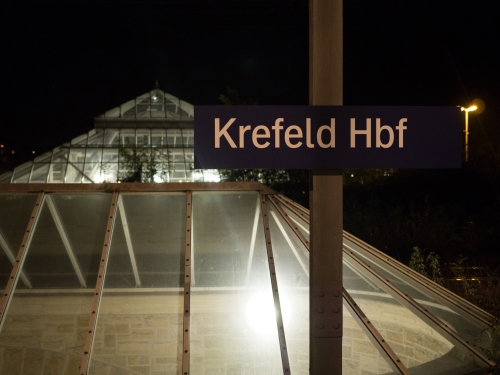 The train set me back a cool €30 and was due just minutes after I’d bought my ticket. I love it when a plan comes together! I spotted a few Krefeld Pinguine jerseys on the platform so I knew I was in the right place. I had a new favourite DEL team.

A quick pre-match look at the league table showed that Dusseldorf sat in 5th while Krefeld were just two places behind them in 7th, so on paper a good game was in store. I recognised a few ex-NHL players and draft picks such as Alexandre R. Picard and Kirill Kabanov, but aside from that I was going in quite blind.

I got to Krefeld with about an hour to spare before face off. The KönigPalast (arena) was just under two miles away, so I followed a bunch of fans from the station and ended up on bus 57 to the arena. Life is so much easier when people wear colour-coded clothes. 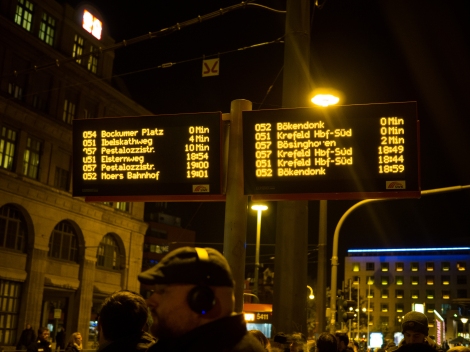 Following the black and yellow clothing…

The bus arrived and everyone piled on without paying so I thought I’d best join them and embrace the culture. It was absolutely rammed and the 20 minute journey got incredibly sweaty which made me think I might have been better walking. It was made slightly tolerable, however, by a guy who looked like Richard Branson kicking off with a chap who was standing too close to the door and preventing it from closing. It’s the little things in life.

I was surprised at just how packed the place was when I arrived and even more surprised to see the away fans arriving with a police escorts! This was followed by a stand-off of sorts between the two ‘firms’ outside the entrance although it ultimately led to nothing. 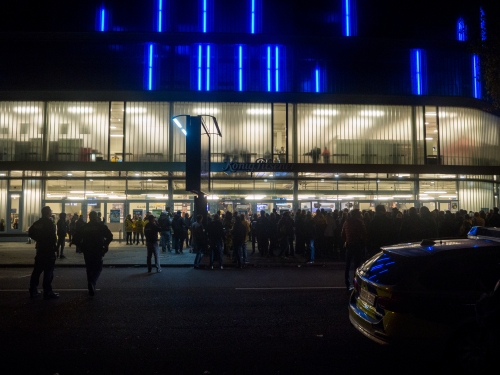 Seconds before the ‘ultras’ arrived!

I took my seat with 10 minutes to spare and there was a booming atmosphere inside, quite the contrast to the hockey in Japan and England I’d seen in the past! Certainly more reminiscent of the KHL than either of those. The pre-match buildup included the obligatory thunder noises, an overexcited announcer and cheerleaders. Some things are just universal.

The players soon entered through a massive penguin (see video) and we were ready to get underway. Puck drop was just a few minutes away!

As with the Athletic Bilbao – Real Sociedad game the other week there were away fans in with the home fans and some were even waving flags! Maybe it’s the British football fan in me but I just cannot imagine doing such a thing on any occasion and certainly not on derby day! I soon realised the large majority of the Dusseldorf ultras were behind me, which might explain why the away chants sounded louder than the home ones!

It was a good end-to-end first period with a few roughing penalties chucked in for good measure. The Dusseldorf goalie in particular pulled off a few great saves and despite a lot of time spent in the opposition’s zone the home team found themselves 1-0 down at the end of the first period thanks to a goal I managed to catch on video when sending a Snapchat!

It was more of the same in the second period only this time Krefeld actually had a goal for their work. They killed off a penalty and as soon as their guy came out of the box he found himself with the puck on his stick, one on one with the keeper. He put it away and the period ended 1-1 meaning it was all the play for in the final 20!

Oh, and at one point the penguin mascot walked across the ice with a dog teddy on a lead and threw it into the penalty box. As you do. 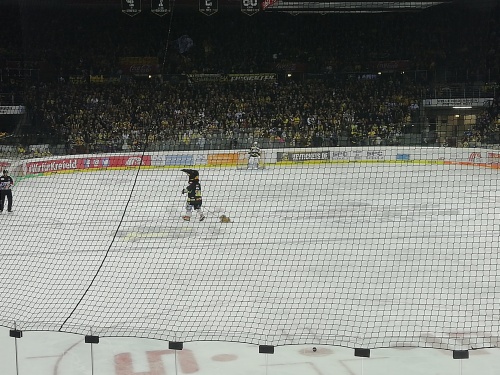 Your guess is as good as mine.

It was the story of the powerplays in the third period as both teams notched a goal with a man advantage to take the game to overtime.

Krefeld took a costly penalty with a minute left that would carry on into the overtime period but in the end it mattered not. They killed off the penalty then killed the game off towards the end of overtime with a cracking individual goal worthy of winning any game. Smiles all round, well, except for the masses of Dusseldorf fans in with the home supporters! 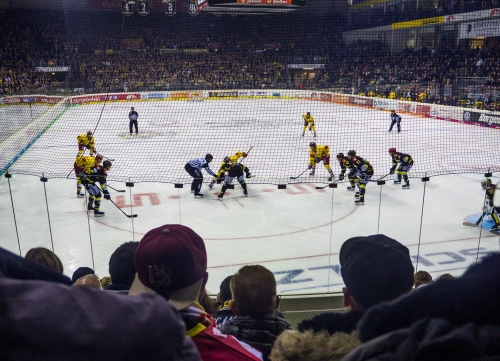 Not bad for a last minute purchase!

I didn’t stick around as I was pinning my hopes on the 10.35pm train back to Cologne which allowed me 40 minutes or so to get to the station. Thankfully there were a load of buses waiting outside the arena and I got to the station with 20 minutes to spare. An early night was in order as I still had to see a bit more of Cologne in the morning. It’s a tough life.

5 responses to “A Spontaneous Hockey Night in Krefeld!”