It’s easy to forget what a beautiful place I live in during the winter; the days are short and often cold and wet. Oh, and the winter tends to last from sometime in the middle of November until the end of March, so yeah, lots of weekends are spent on the sofa watching football wishing away the grey skies.

I’ve made no secret of the fact that it’s absolutely stunning here in the Basque Country…on the right day. Sunny days spent wandering to Atxondo or climbing Anboto are great, but they’ve been few and far between thanks to the fact that my contract starts as autumn’s on the way in and ends just as summer starts. That’s why, with a week of uncharacteristically warm weather in the middle of February, we decided to strike while the iron was hot (no pun intended) and jump on the train to check out the nearby beach town of Zarautz.

Now, I say ‘nearby’ and in theory it is; according to Google the distance between Durango and Zarautz is 58 kilometres – around 35 miles. However, as I mentioned when we went to Bayonne, the trains here aren’t exactly shinkansens and as a result, this fairly short journey ended up taking about an hour and a half! Not the end of the world for me, but my housemate James was suffering with quite the hangover and I have no doubts that the 90 minute journey felt about twice as long for him! My decision to extend dry January into February felt worth it just for that moment.

We arrived early afternoon and quickly headed for the seafront. It felt so bizarre to be out and about at the beach in our t-shirts in February, but we certainly weren’t complaining! It seemed we weren’t the only ones with this idea as the beach was booming. Great minds and all that.

A rare quiet spot on the beach.

It was a straight choice between left or right when we got to the beach, and as we were both starving we headed left in search of a burger joint that James remembered from his time at a surf camp here a few years back. Just like everyone had the same idea as us with regard to going to the beach, it seemed our choice of cuisine was in high demand too as the ‘Mele Mele’ burger restaurant was packed to the rafters.

In the end we had to settle for a takeaway, which considering the weather wasn’t a bad option at all. The great thing about Mele Mele was the fact that there’s no set menu – you just build your own burger by filling out a form and ticking what you want on there. In the end, I put together quite a beast. 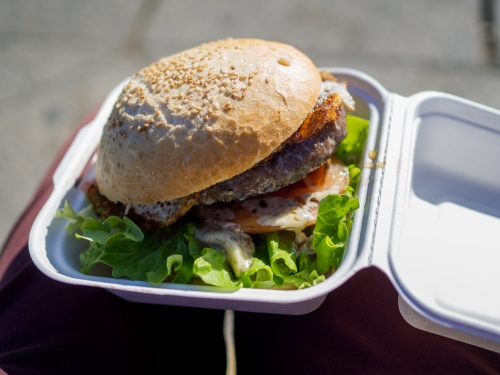 How the hell was I supposed to eat this?

The downside to this was actually trying to eat the bloody thing. Lunch in the sun is always a nice idea in theory, but in practice it’s totally different. I think I probably got about three bites in before regretting the blue cheese sauce which was dribbling down my leg.

If you look closely, you can see a perfect bead of blue cheese sauce falling.

With our hunger satisfied, James’ hangover fended off and my jeans caked in blue cheese sauce it was time to set about exploring the place. We didn’t stray from the seafront and basically just walked the length of the beach enjoying the opportunity to actually be there at this time of year!

One thing I realised recently is that I’ve not really made good use of my camera in the past few months, and seeing that I still had pictures on the internal memory from my trip to London in August 2018 confirmed that! I made it my aim to get some good snaps but soon realised that it was impossible to wander around the beach with a camera and not look like a creep. I found myself concentrating more on not looking like I was taking pictures of people’s kids than actually getting a decent shot! Still, it was nice to get a few that came out quite nicely!

The masses were behind me!

Having reached the end of the beach we decided to climb the cliff in search of better views. It wasn’t much of a climb and could certainly be done by families with children, but with me recovering from a strained peroneus longus caused by running I managed to get a good few whinges in before we reached the top!

The views were worth the minor pain and from then on we decided to keep walking and see where it brought us out. According to the maps dotted around we’d end up in the nearby town of Orio where I knew there was a train station. If only it had been as easy as that.

Yes, this was taken in February!

Our unwillingness to take a downward path to follow the track along the coast ended up costing us time and probably a much nicer experience. “There’s no point in going down just to go back up”, I believe were my exact words, but in the end this couldn’t have been more wrong as we ended up traipsing through campsites and random country roads in search of the nearest town instead of taking in the coastal views.

It wasn’t quite as bad as the time I got lost in Taipei with a mate and rather dramatically feared for our safety, but I couldn’t help feeling like we’d taken a wrong turn when we found ourselves wandering up part-trodden paths on a mountainside. My fears were allayed by the sight of another human on the trail, but his response of ‘No idea’ to my request for directions didn’t exactly fill me with confidence! 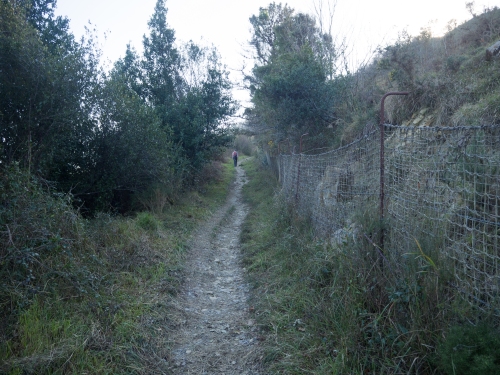 Thankfully, we eventually found our way back onto the main road and into Orio, where we had a quick wander around before realising there was bugger all to see there and waited for the train to take us back to Durango.

Ah well: nothing ventured, nothing gained!