The January and February slog was an absolute toughy this year, and with a nice long weekend to welcome in March it seemed logical to get away for a bit and make the most of it. It was pretty much a case of getting on Skyscanner and seeing what was the more interesting and affordable option for a three night stay; after not much deliberation at all it was decided that Berlin was to be the destination and the attention soon turned to sports teams in the area. 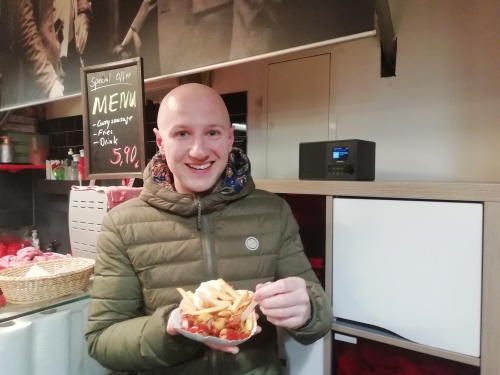 The first of many currywursts!

With Hertha Berlin kicking off before we arrived and 1860 Munich playing away that weekend, football was out of the question. Thankfully for us the DEL (Deutschen Eishockey Liga) is something of a big deal in Germany and the wonderfully named Eisbären (polar bear) Berlin were playing their final regular season game at the Mercedes-Benz Arena on the Sunday afternoon. 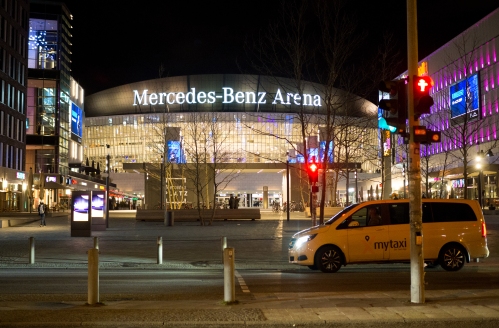 Just like my spontaneous trip to Krefeld back in November, the opposition would be Dusseldorfer EG; however unlike that game, it was a little more planned out this time round as we invested in tickets a good few weeks before. This turned out to be an inspired move as it was a sell-out in the 14,000 capacity arena. A far cry from the ‘turn up and pay on the door’ system we experienced in San Sebastian a few months earlier!

We’d opted for the cheapest tickets in the ‘Fankurve’ – a standing section behind one of the goals not uncommon at German sporting events – which set us back €19.50 each. Probably the worst view in the house but undoubtedly the best atmosphere so it was something of a trade-off! Having been on a bar crawl the previous night and not had much sleep we did question the wisdom of standing in such a cramped, hot space but in the end it was decided that the best thing to do was power through and get back on it.

Caption the guy on the right…

With spaces not guaranteed we opted for the biggest beers so we wouldn’t lose our spot in the crowd. The drinks, which were 0.75l in size, cost a very reasonable €6 and it seems the affordable nature of being a fan in Germany stretches beyond football. It’s nice to see a culture where the fan is considered and not taken for a ride!

With face-off approaching it was time for the novelty inflatable animal to be blown up as seems customary in these parts. Krefeld had a penguin and – as their name in English is the ‘polar bears’ – Berlin’s players skated out through a massive one of those. Whatever floats your boat.

During the roll-call there were several oil drums on the ice blowing flames up into the air as the players took to the ice. Not sure fire and ice are a good combination really but someone obviously gets paid a lot more than me to make such decisions!

It was around this time that the fans in the ‘Kurve really got going. Led by a couple of blokes at the front with a megaphone, the chants didn’t stop as long as there was action on the ice. I personally think it’s mad that people pay to go to games and spend their entire time facing away from the action, but it can’t be denied that it does create an electrifying atmosphere when done right!

As for the game, the first period was end-to-end stuff but ended scoreless. I joked that my J. League 0-0 curse had spread to hockey but the truth was I genuinely thought it might have done!

Fears were allayed as the home team took the lead in the powerplay midway through the second period and added an empty-netter in the final minute for a 2-0 win. Not exactly the scoreless draw I seem to attract but a very low scoring game of hockey for sure!

The players did their laps of honour and thanked the fans, although research suggests they finished the season 9th out of 14 – I dread to think of the reaction they’d get if they were an English football team celebrating that level of mediocrity! It seems they just about scraped into the playoffs so I suppose it’s anyone’s guess as to how far they go in the post-season.

We finished the day with more drinks and some food at a nearby restaurant where I continued the hockey tradition I unknowingly started in Cologne by opting for the Eisbären-named pork knuckle. When in Germany, and all that. 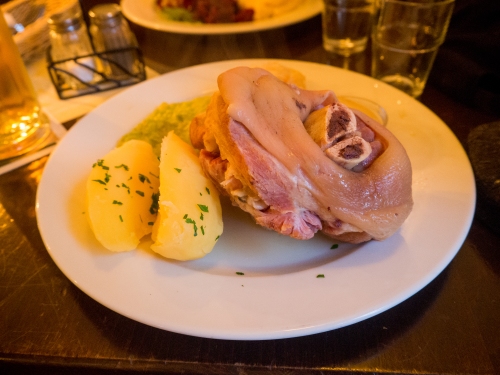 The now customary massive piece of meat and potatoes. This one got extra marks for the mushy peas.

Not quite your typical first day in Berlin, but there was still a full day ahead of us for sightseeing!

One response to “Hockey Afternoon in Berlin!”