In recent times my trips tend to have been limited to only a day of sightseeing thanks to various factors. Madrid was limited simply because of time constraints, and a mixture of sport and a not-quite-long-enough three night trip meant my visits to Dusseldorf, Cologne and Leverkusen were of the flying variety. As for Jakarta, blame the jetlag for that one.

It should come as no surprise, then, to discover that with this trip to Berlin we managed to hamstring ourselves to just one full day of sightseeing thanks to our desire to drink beer and watch ice hockey. No regrets.

In all honesty a full week probably isn’t enough to even scratch the surface in a city with as much history and as widespread as Berlin, but I think we managed to cram as many essentials as possible into one whole day. Feel free to let me know if we were complete idiots and missed something ridiculously obvious.

With our stomachs lined from a hotel breakfast which tasted even better once they forgot to charge us, we hopped on the S-Bahn to Friedrichstraße; a short and very windy walk along the river followed, taking in the Reichstag (government building). It wasn’t long before I found myself regretting my choice of headgear as my flat cap was blown away into a conveniently long traffic jam, the majority of which seemed to enjoy the sideshow of a little bald Englander running down the road trying to grab a flying hat.

Don’t know why it’s here, but let’s get a picture anyway!

According to Google it was a ‘symbol of division during the Cold War’, but is now a symbol of peace and unity and – according to my mate Laurence who joined me on this trip – was built as a ‘sort of ‘yay look how great Germany is’’ monument. Sounds about right.

Memorial to the Murdered Jews of Europe

One that needs no explanation.

Situated just around the corner from the Brandenburg Gate, this collection of 2711 concrete structures of different heights was opened in 2005 as – like the name suggests – a place of reflection and memorial for those subjected to the atrocities of the 20th century. It’s really quite a sight and the eery silence of the place hits you straight away.

There’s an information centre here too, but it appeared to be closed when we visited. As I’ve found in places like Hiroshima and such like, there seemed to be a few people taking selfies and even one guy stood on top of one of the blocks for a photo. Each to their own I guess, but to me it just seems like incredibly bad taste and the guy was rightly told to get down by security guards with a very confused look on his face.

Upon leaving the memorial it was announced that Rochdale’s long-serving and greatest manager of all time, Keith Hill, had been sacked by the club. I know this is a travel blog and not a footy website, so that’s all I’ll say on the matter. Based on this and my need to scour the forums and Twitter for news it was decided we’d head in the direction of the Dom (cathedral) and pitch up in a bar for a short while for me to gather my thoughts.

In the end, the walk from the Memorial (via the Brandenburg Gate – again) to the Dom didn’t take too long and we ended up there before we’d settled on a bar. I’d made a vow to myself after Verona a few years ago to not spend any more money on visiting cathedrals, and after avoiding doing so in Cologne and León recently, it wasn’t even a consideration here. 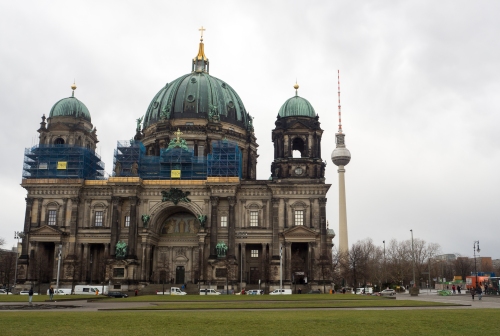 That said, the Dom itself was fairly impressive from the outside and the positioning of the old communist TV tower next to it made for quite the contrast! Still, I preferred the aforementioned Cologne and León cathedrals in all honesty!

The Altes Museum next door was also quite aesthetically pleasing, but as is often the case it was a case of a quick picture then onto the next – timing is of the essence here!

After a quick pint in a nearby bar – where the waitress kept making snide comments about us being on our phones – it was time to move on again. On a side-note, is there anything more smug than someone making such holier-than-thou comments? We’re paying for beer, so give it a rest, eh? As far as she knew, one of us could have just received some terrible news and we could’ve been looking up immediate flights back home. We weren’t, but you never know, do you?

Anyway, allow me to climb down off my high horse to talk a little bit about the DDR Museum.

A man who knows a lot more about history than me.

It’s basically an interactive museum outlining life in what was known as East Germany – the part of the country that was under communist rule. Here you can wander around a typical high-rise flat from the era, explore an old jail cell and even drive a simulator of an original old Trabant P601.

Again, I’m far from an expert on history so I found it quite enlightening and I imagine for those with an interest in the subject it would be like a playground. 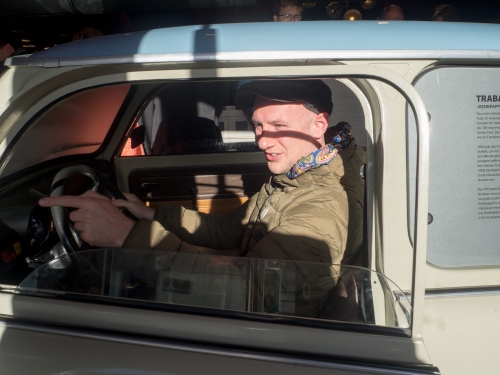 At around €10 a pop, it’s definitely worth a visit. The interactive element is definitely a game-changer for me and I imagine many more who get a little bored just wandering around traditional museums.

A quick food and beer stop followed the museum before making our way to Checkpoint Charlie. Once again I showed my ignorance in not actually knowing what this was, but a quick Google search puts it better than I ever could when it describes it as ‘the best-known Berlin Wall crossing point between East Berlin and West Berlin during the Cold War’.

Why do any work when Wikipedia can do it for you? Side note: if any of my Master’s professors are reading this, pretend you never saw that. 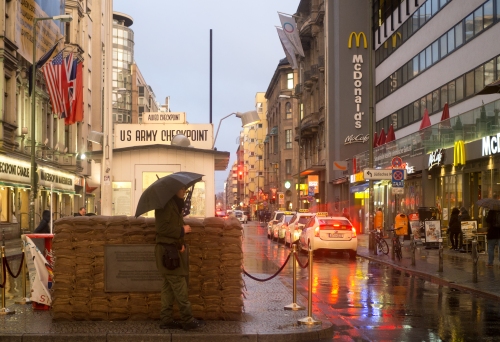 Can’t decide whether this juxtaposition is surprising or sadly predictable.

It’s a bit of a trek from the DDR Museum and Museum Island, but I’m a big fan of exploring cities on foot instead of just jumping from place to place on public transport; and no, that isn’t just to save money. It’s definitely walkable, but be sure to check the weather forecast before embarking on the half-hour walk – we got caught in a downpour and got absolutely drenched. Why is it that you’re never walking with the wind behind you in these situations?

As for the checkpoint: it is what it is. Interesting to see; perhaps quite surprisingly, though, very touristy.

The final thing on the list to tick off as we realised we’d been in Berlin for three nights and not even seen the wall! There are bits of it remaining all over the city but arguably the most famous part is the East Side Gallery – essentially a huge section of the wall with murals painted on it by artists from all over the world.

The one everybody seems to want to see!

Sprawling from pretty much right outside Ostbahnhof S-Bahn station and ending at Warschauer Straße, it’s convenient to just get off the train at one stop if you’re passing through, take in the wall and then hop back on at the next stop. Apparently during the day there’s a food market and a few open-air places, but we visited at 9pm on a freezing cold night so everything was pretty much shut up!

There’s a wide variety of artwork and it would be impossible and slightly ridiculous to attempt to snap them all, but here’s a selection of some of my favourites. 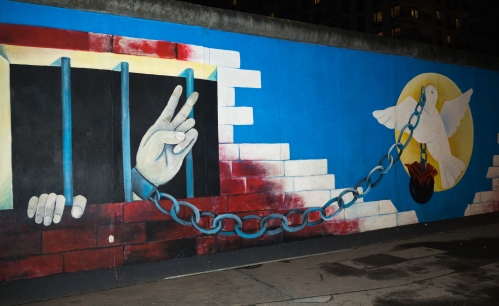 With that we waltzed off into the night to get suitably drunk before taking an 8am flight back to Bilbao on only two hours sleep. A much needed break from both teaching and my dry January which also became a dry February! There’s still plenty of stuff I’d like to see in Berlin and – as I said – a weekend really isn’t enough time to scratch the surface.

Ah well, I suppose it’s just an excuse to return one day!

4 responses to “Berlin in a Day”