Thanks to Dalian’s proximity to Russia (in relative terms, anyway!) and its history which I won’t even claim to know anything about, there remains quite a lot of Soviet influence in the city. For a start, there’s ‘Russian Street’ slap bang in the centre of the city, which is basically feels like it’s been lifted straight out of the Soviet Union Sim City-style.

Aside from a loads of stalls all selling the same stuff though and some typical Russian architecture including a church that looks a bit like the one in Yekaterinberg, there’s not really much to see or do there.

I assure you this is still China!

Those of you who listened in history class at school may have heard of Port Arthur, which came to prominence during the Sino-Japanese wars of the late 19th and early 20th century. It was the site of brutal massacres, with the fatalities ranging from 1,000 to 60,000 depending on what source you read. Nowadays though, it is a town packed with historical insight which goes by the name of Lvshun (pronounced ‘Lushun’), and is just a short metro ride outside of Dalian.

As an aside, to get to Lvshun you need to ride to the end of Line 1 and change at Hekou to Line 12 of the Dalian Metro. This doesn’t sound too strange, until I tell you that the Dalian Metro consists of four lines. I’ve already given up looking for logic here in general, but even I am a little baffled by the jump from Lines 1, 2 and 3 to 12! I’m sure it made sense to someone somewhere.

Locals tell me it’s ‘Lvshun’, the station says ‘Lushun’, the internet says both. Who knows?

The train ride between Dalian and Lvshun trails along the coast of the peninsula and offers some stunning views; however, I largely spent the 45 minute journey worrying that the incredibly hungover-looking lad next to me was going to throw up Friday night’s session all over me. Vomit-free, I arrived at Lvshun Station with absolutely no idea what to do.

I’d left it a little too late to really take advantage of being there and upon waiting a good 20 minutes for the bus into the middle of the town I was deliberating getting back on the train and trying again another day. Just as I was about to put it down as a bad job, the 203 bus came around the corner like a knight in shining armour and I decided to hop on and see where the rest of the day would take me.

I didn’t have to wait long as just four stops later I found myself outside the catchily-named Lvshun Russo-Japanese Prison. 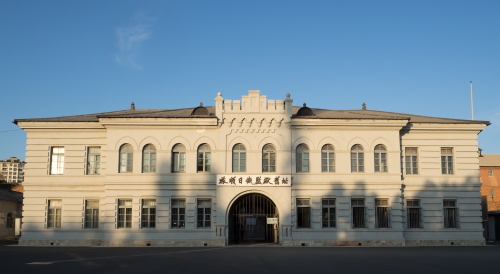 Had to wait ages to get this picture with nobody in it!

This prison was used during the wars and has now been preserved and is open to visitors free of charge. I managed to get in at 3.30pm and it seemed they were winding down for the day, although I initially thought I wasn’t going to be let in at all as I was asked for my passport. Thankfully the guard accepted my work permit and away I went.

A prison is a prison, right? I’ve been to a few in my time (as a tourist), most notably Tuol Sleng in Cambodia, and while this was nowhere near as harrowing, there were still some nasty stories within the walls. The torture room in particular made for grim reading. 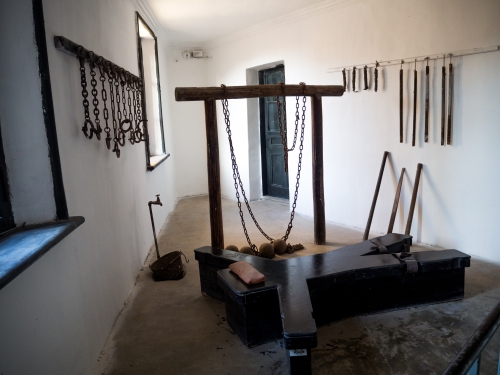 Just in case you were wondering what it looked like!

There wasn’t a huge deal to see, the cells were bare and looked a little restored but there were some remnants left behind from the days that the prison was active that were of interest. All in all, an interesting place to visit as there is plenty of information on the walls in English and if you go slowly you can probably squeeze an hour out of it.

There were a couple of other things to see, including general war history and the wonderfully-titled ‘righteous man Anzhong-gen immolating place’ complete with flowers, photo tribute and a noose.

Not sure it’s how I’d like to be remembered, but each to their own.

It’s rare in China that I find myself being pestered by taxi drivers (except at Dalian North on a Yifang matchday!) but that’s what happened upon leaving the prison. I’m not sure if Lushun is a huge tourist destination, but to my surprise I was greeted with a chorus of “hello, how are you?”s and suggestive points to their cars which I politely declined.

I had no real plans going forward. It was too late to see any other sights, and having recently been diagnosed with gout walking up to the city’s mountain viewpoint was out of the question. In the end I decided to stroll in the general direction of the city and see what happened. 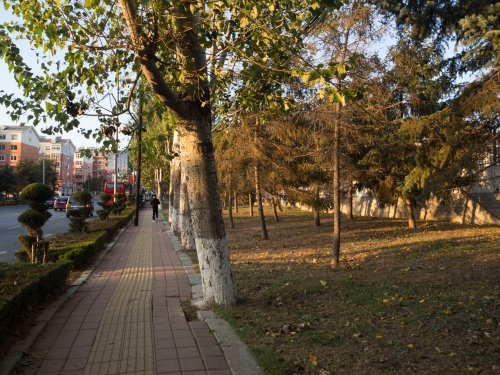 Perhaps not what you’d expect from a city in China!

I’ve been really quite surprised at how green Dalian is and Lvshun was even more so. Walking along the leafy autumn roads it was hard to remember that I was still technically in a city of seven million people.

Thankfully, the tranquility didn’t last long and I was back into the manic life that I love before long as I reached something resembling a town centre. Cars were going in all directions, there were malls and flashing lights everywhere. I was back in my comfort zone, in other words. 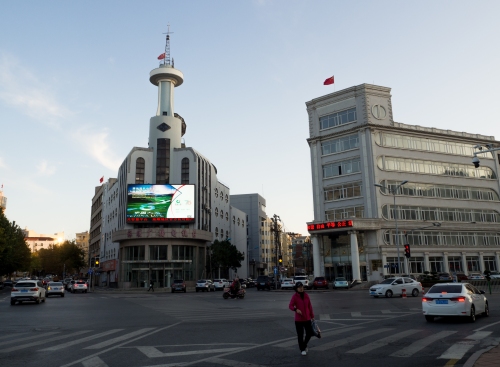 With the autumn sun quickly setting I decided to head down to the front in the hope of a good view. With there being an active military base nearby, I wasn’t sure how welcome a foreigner with a camera would be but it turned out the locals were all down there snapping the beautiful sunset too. Always one to embrace the culture and all that.

Hashtag no filter and all that.

With that, I called it a day and vowed to return to Lushun at a later date for a full day. I called a Didi (Chinese Uber) and headed back to the metro station, discovering in the process that my Chinese was definitely improving as I managed to answer some of the driver’s questions.

They do say that taxi drivers are essentially a free lesson in whatever language you’re learning. I’m not sure I quite got the gist of this one though. 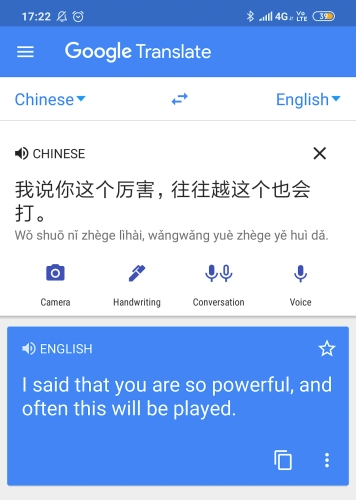 It sounds like a compliment though, so I’ll take it!