For some reason despite living in Tokyo for two years, I never took advantage of the cheap and short flights to Seoul, capital of South Korea. In fact, the closest I got was a short layover in the airport during my business class flight from Tokyo back to London last summer.

Since moving to Dalian, however, my tourism has been largely Korea-based. During the national holiday in October I visited Dandong – a Chinese city on the border of North Korea – and a month later I found myself taking advantage of a light schedule by heading to Seoul for the weekend.

I didn’t really have much on the agenda as usual; in fact I’d only ever heard that Seoul was a great place for nightlife. However seeing as I’m currently on a booze-free diet thanks to gout, this wasn’t really a priority. I decided to take a break front the doctor-imposed red meat-free diet for a weekend though; one weekend won’t hurt, right?

This was the one thing that just kept popping up on ‘things to do’ lists.

Built in 1395, this was the main royal residence of Korea’s Joseon Dynasty. Apparently most of the grounds were destroyed in a fire during the Imjin War in the 16th Century, and were later restored in the late 1800s and early 1900s; this might explain why despite apparently being over 600 years old it really doesn’t feel like it!

What was pretty cool was that I accidentally arrived at the time of the changing of the guard ceremony, although I didn’t know what it was at the time. This ceremony basically consists of a bunch of marching guys in very colourful outfits waving flags in sync. I’m not really doing it justice there.

Anyway, a bit of reading tells me that it happens on the hour, every hour between 11am and 3pm!

A happy accident, seeing this!

In order to avoid the queues, I decided to try my luck with the automated ticket machines next to the manned ticket offices. I’d had some concerns over whether I would be able to use my Chinese bank card abroad as banks from different countries seem to have all sorts of different rules and regulations; having used it fine at Incheon Airport I was feeling confident.

This misplaced confidence soon evaporated when the machine swallowed my card – hook, line and sinker! A mini panic followed as I tried to communicate to the people behind me not to use the machine as I went to alert the staff that my card had been swallowed. Being too bloody British though, I just couldn’t bring myself to push in front of the customers buying tickets at the staffed offices. Unbelievable!

Thankfully, a few locals decided this was a rather more urgent matter and immediately dragged a staff member over to retrieve my card. Panic averted, and ticket in hand (from a human!), it was time to explore the palace. 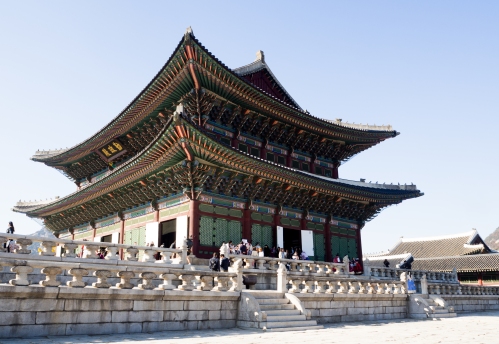 One of many popular selfie spots!

Predictably, to me it just seemed like any other temple or palace this side of the world. I suppose for some people there are massive differences, but they’re all just a bit samey in my opinion.

What was slightly different, however, was the amount of foreigners walking about in the traditional hanbok clothing. Like seeing honkies walking about in Tokyo wearing a kimono, it’s all a bit cringe to me. Then again, they got free entry as a result whereas I paid 3,000 Korean won, so maybe I’m the idiot here.

A rare moment of peace!

Just a short walk from the Palace is Bukchon Hanok Village, which is an old traditional Korean village and a far-cry from the super-modern other parts of the city.

There’s not really a great deal to see or do here aside from pop in and out of little shops, but it’s nice to stroll around the residential area and see a side to the city that feels like a throwback to the olden days. Unfortunately it felt a little exploited and overrun with souvenir shops, but you can’t really blame them for making the most of it!

One of the very few pictures I got before my camera battery died!

One thing’s for sure: I’d bloody hate to live there with all the tourists milling around from morning to night!

If you’ve ever been to Tokyo then you’ll know what I mean when I say Hongdae is basically Seoul’s equivalent of Harajuku.

Hongdae: a place for aspiring artists, and just about everybody else!

Seemingly popular with locals and tourists alike, both young and old, this bustling area of the city has things going on in every direction. Everywhere you turn there’s a band performing, people dancing, families playing games, people shopping and so on.

This lot even had their own groupies singing along!

It’s a real hive of activity, and slightly less cramped than Harajuku’s Takeshita Street. Only just, mind you! Rumour has it there are a few decent bars and clubs here. As for me? I settled for a 32-inch ice cream instead. 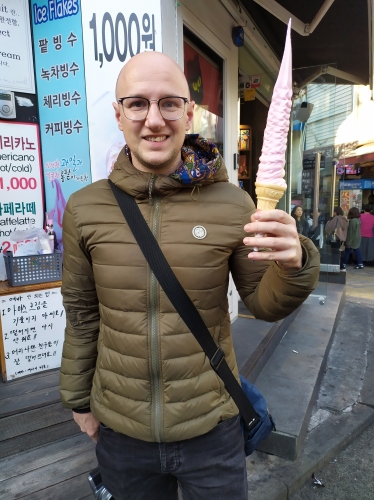 Trying desperately to avoid any puns about my 32-incher.

Just a big, busy, bustling shopping street. More expensive than China, so there wasn’t really any need for me to take advantage of it. Still, a cool place with a good vibe.

If shopping’s your thing…

People seemed to be selling cosmetic face masks left, right and centre for some bizarre reason. I’m sure female readers could enlighten me as to whether Korea is at the cutting edge of this sort of thing. Actually, can I say that in 2019? Feel free to enlighten me, whether you’re female, male or anything else!

The final thing to tick off the list was Namsan Tower which, as the name suggests, is a big tower with sprawling views of Seoul. Apparently we weren’t the only ones with this idea.

The picture does not do the three-storey queue justice!

After about an hour of queueing, during which my blood pressure rose to unspeakable levels – thanks to the man behind me being seemingly unable to move forward without bumping into me – we finally got on the jam-packed cable car to the top of the mountain.

I don’t know about you, but when I’m entrusting my life to cable, I’d much rather they underfilled than overfilled it. Maybe I’m just a snowflake. 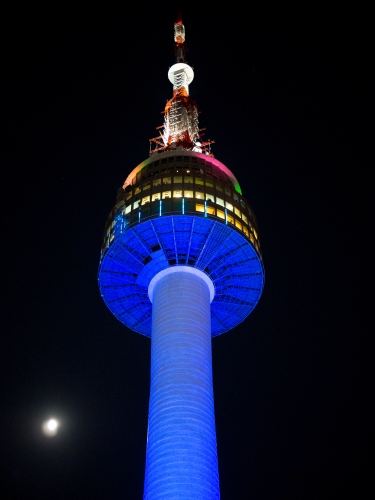 We didn’t go up here in the end, so I couldn’t say if it’s worth it!

The short ride to the top dropped us at the bottom of the tower, but as the sky wasn’t too clear we decided the view wouldn’t be too much better from up there so just stayed at the peak of the mountain. To be honest, the view kind of summed up my general thoughts towards Seoul as a city: slightly underwhelming. Mount Hakodate, this was not.

I left Seoul with mixed feelings. It’s clear that there’s plenty to appeal to people in the city, and I do get the impression that it would maybe be a better place to live than visit. The food was excellent (more on that in a later post), but I couldn’t help feel like the city was lacking something. Maybe my expectations were too high after hearing mostly great things, or – perhaps more likely – maybe I should just go back when I’m able to get hammered.