In my last post I explained that my general feelings towards Seoul were just…meh. It was hard to put my finger on what exactly I wasn’t bowled over, but I left with a general feeling of being underwhelmed.

Thankfully, the food was one thing that lived up to expectations and meant that my lasting memory of Seoul isn’t an entirely mediocre one! Without further ado, here are my five top tasty treats from my time in Korea’s capital.

The first thing I ate in Seoul and – perhaps annoyingly – my favourite! That’s not to say everything else was a disappointment in comparison, but the bar was certainly set very high. 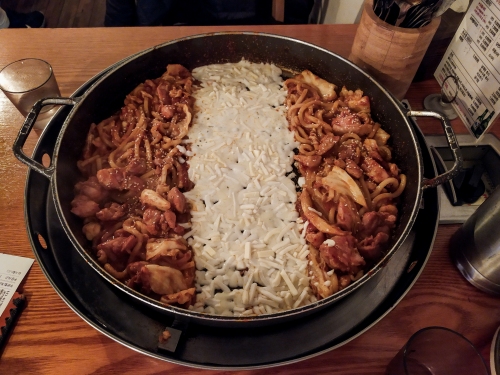 Stir-fried chicken with a red chilli paste, mixed in with all sorts and topped with more grated cheese than you can shake a stick at! We had udon noodles in ours and to top it all off, it was accompanied by lettuce leaves to wrap it up in. Kind of like a vegetable fajita, if you will. An absolute delight.

There seem to be loads of different names for this depending on what you’re eating, so to avoid being wrong I’ll just go for the generic name of Korean BBQ.

I’ve had this many times before as it’s incredibly popular in both China and Japan, but it seemed like sacrilege to go to Korea and not have some barbecued meat. As a result, I had it twice over the weekend! 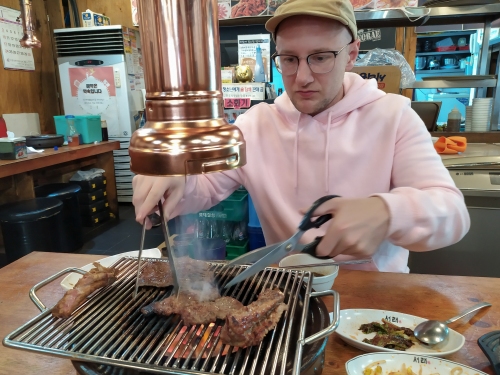 You can’t really go far wrong when you’re presented with a smoking grill and a plate of uncooked meat and vegetables. It’s one of those occasions where the experience is probably 50% of the enjoyment, as it’s quite simple food. Still, an absolute must if you’re in the area!

The literal translation of this is ‘fire meat’, can you guess what type of food it is?

Technically this could go under Korean BBQ, but seeing as it was served as a dish in itself it gets its own section. Definitely not just trying to make up the numbers, nope, not at all… 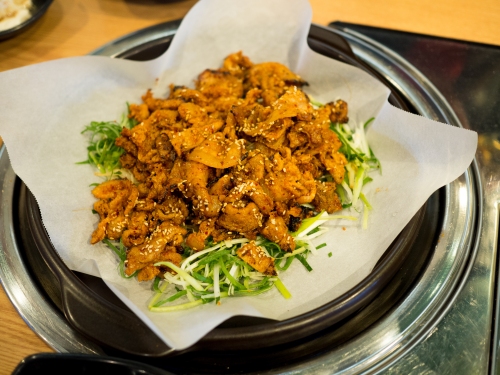 We weren’t trusted to cook our own.

The recipe varies but in general bulgogi consists of thinly-sliced beef or pork marinated in some combination of soy sauce, garlic and oil along with other bits and bobs like ginger and onion. It’s then barbecued/grilled and served with various side dishes like kimchi and those other random little bits of salad-y type dishes you get in Korean restaurants. Delicious!

A Korean take on chicken soup which is much nicer than I’ve just made it sound – it’s basically a whole poussin (*veggies and vegans look away now* a young chicken) served in a rich ginseng broth. It’s apparently good for your health, so all those times your mum told you to eat chicken soup when you were sick might have actually carried some weight.

You might have to take my word for this one.

It wasn’t top of my list but I went along with it when it was suggested and boy, am I glad I did! It was an absolutely delicious winter warmer (although apparently it’s customary to eat it at the hottest time of year – figure that one out), and the chicken was cooked to such a level of tenderness that even the bones dissolved in your mouth.

Like I mentioned, I’m probably not selling it very well.

As I said before, definitely not just looking to make up the numbers here

Head down to Hongdae for this famous 32-inch, cavity-inducing monstrosity; I’ve had five fillings in the last two weeks, true story.

Some have doubted whether it’s actually 32 inches, but it’s more than enough either way!

To be honest it’s a bit over-the-top and hardly a taste sensation, but it makes for a good photo, right?