Throughout my time in China the large majority of the beer I’ve put away has been Tsingtao or Snow, with the occasional Dalian Beer thrown in for good measure. Craft beer is certainly an option too, but that’s less readily-available unless you go to one of the seemingly endless craft bars popping up all over Dalian.

Before visiting Guangzhou I’d never even heard of Zhujiang (literally Pearl River) beer, but as soon as I heard there was a museum with bottomless free beer at the end of it, I was absolutely sold. Maybe when temples start giving out free beer I’ll start showing a bit more interest in them.

For a very reasonable 30RMB (£3.35) you’re given a ticket and basically allowed to wander around at your leisure. The English-speaking staff kindly recommended I visit the museum on the second floor before returning to the ground floor bar to ‘drink some beer’. Sounds like a plan to me.

Who knew beer was this old?

Now I’ve mentioned in the past that museums aren’t really my thing and I tend to rush through them in order just to tick them off the list. I was surprised to find that even a beer museum suffered the same fate, as I kind of meandered around not really taking in what I was looking at. I clearly had my eyes on the prize, and with only 90 minutes to closing time, I was in no mood to mess around.

In all seriousness though, it’s a decent museum with plenty to see and read and – unlike some places – everything is handily translated into English. They definitely know their clientele. There’s even a helpful arrow system on the floor to lead you through in the most efficient way, and get you closer to the promised land of free beer with every step.

The trail starts off with a history of traditional beer brewing before bringing you right up to date with more modern techniques. All very interesting I’m sure but what really grabbed me was the so-called ‘Marvellous Terrace’, which was essentially a room positioned at a slightly odd angle. It’s hard to describe but stepping into this room was the closest I’ve been to feeling drunk without alcohol. Bizarre. 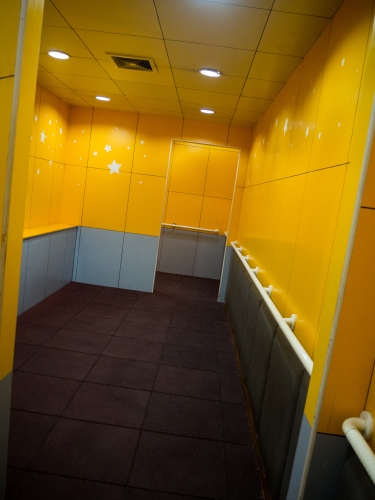 Trust me, it’s weirder than it looks!

There’s a section dedicated to the Zhujiang beer and its history, as well as general beer culture around the world and more.

One thing I found particularly cool was the use of old brewing machinery in the museum. At one point I found myself stood inside an old industrial bottle washer watching a video about brewing. One to tell the grandchildren. Well, maybe when I’ve run out of actual interesting things to tell them.

A disused bottle washer on the outside… 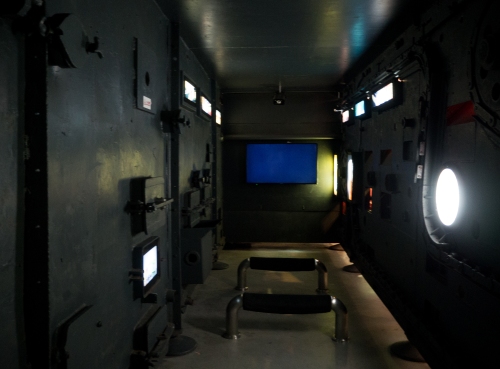 …a mini cinema inside!

With the museum seen to, all that was left was to sample the local tipple. I’ve always been one for immersing myself in the culture and it would be very rude not to try the beer on offer.

The woman behind the counter invited me to help myself and told me that if I liked them I could refill. Little did she know that I’d be refilling whether I liked it or not!

Time to get stuck in!

The choices were between ‘yellow’ and ‘raw’ beer. I wasn’t sure what to expect from either, but I was hoping that ‘raw’ didn’t mean partially-fermented like the ciders in Basque cidrerias. I’ll spare you the details but let’s just say my stomach didn’t particularly agree with their methods!

Thankfully, both were tasty. They were both beer, after all. The yellow beer had a sweeter, beery taste to it, while the raw one (yeast isn’t fermented, apparently) was a little stronger tasting and less sweet. Can’t grumble for free! 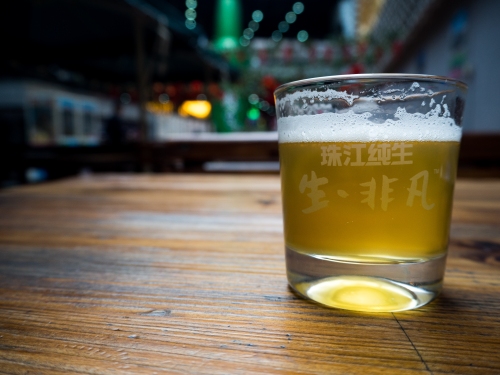 Yellow beer came out on top, although I had a good few raw beers for good measure!

I managed to put away four of each type of beer before being turfed out for closing time, although they were less than half-pints so I probably only had a couple of pints in total! A very enjoyable way to spend a few hours – if only I’d got in earlier!