If I could use one phrase to sum up Dhaka – Bangladesh’s crazy capital city – it would be ‘go with the flow’.

Plans are all well and good, but while you’re here there’s absolutely no chance things will play out exactly as you want them to. This can be a good and a bad thing.

The bad: I’d heard that the traffic in Dhaka was manic, but no anecdotes can prepare you for the reality. It really does have to be seen to be believed. A perfect example is the fact I stayed in Uttara – a 13 kilometre drive out of the city.

The first day I arrived I hopped onto the bus into town and a mere two hours later (13 – THIRTEEN – kilometres, people) I arrived at my destination. I even had time for a power-nap to sleep off some of the tiredness from my overnight flight, although I’m told this isn’t recommended.

My bed for the afternoon!

Long story short: don’t expect to get anywhere in Dhaka in a hurry.

From then on, I generally experienced the good side of Dhaka. My plan was to spend the afternoon wandering the streets of Old Dhaka and just soak it up (translation: eat everything I could get my hands on), and visit the famous Lalbagh Kella – the city’s famous, incomplete 17th century royal fort. 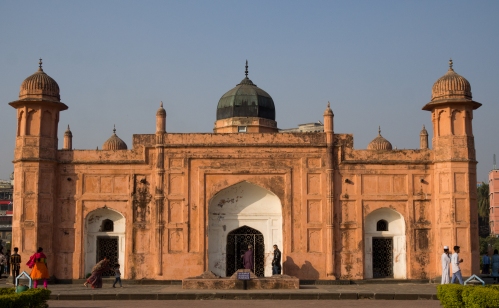 Serenity amongst the madness!

Upon arriving at the Fort I was not at all surprised to see that I would be charged 200 taka (£1.81) while locals were charged a tenth of the price at 20 taka. Similar to my experiences in India and especially Kandy in Sri Lanka, you just learn to suck it up and accept that as a foreigner you will be charged more than the locals.

I’d only been in the Fort grounds a few moments when I was approached for the first of many selfies by two young lads. Of course I obliged (as I would do many more times that afternoon – and every single day in Bangladesh!), but was then a little confused when they asked me to take a photo of them not on their phones, but on my camera! Not sure what the end goal was but I went along with it and you can see the end product below! 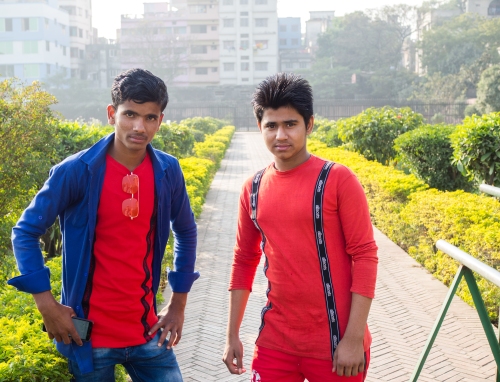 Not sure what they got out of this, but at least I got something to write about!

The ruins of the Fort were a nice way to spend an hour or so – although I’d probably have got round in half that time had I not been stopped by every other person for a selfie! Considering the absolute madness of Old Dhaka and the city itself in general, it was quite surreal to find such a chilled spot slap bang in the middle of it! 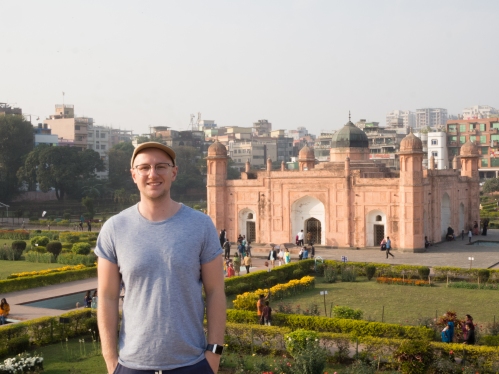 Fighting to keep my eyes open.

It was shortly after leaving the Fort that I met my soon-to-be friend and Dhaka guide Al-Amin, which leads me on nicely to Bangladesh’s best feature: the people.

I know, I know, stranger danger and all that. We’re taught – and rightly so – back home to be wary of the intentions of strangers. In fact, if someone just came up to you in the street in England and started a conversation, chances are you’d think one of two things:

Al-Amin: great guy who knows where the great food is!

In Bangladesh, however, I decided to trust my instincts and on this occasion it really paid off. Not only did I get to explore the main sights of Dhaka, but I got an insight into local life too.

I tried desserts and drinks I probably wouldn’t even know existed; take this Bangla lacchi, for example!

He showed me around the ghat area of the city, where you can take launches (slow, steamer boats) to far-flung destinations. I’m pretty sure some people almost missed their boats while offering me cups of tea and asking for selfies. As I said in my Guangzhou post, I’m far from a tea drinker but in Bangladesh it really is a different drink. 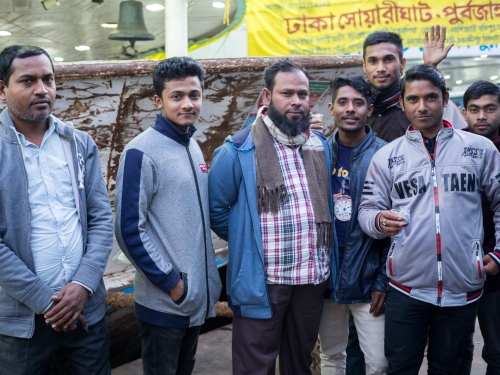 The tall lad at the back was wearing a Costa Coffee jacket, bizarrely.

One day I even visited Al-Amin’s University with him. He’s an English student, so it was interesting for me to go and meet the English department at the uni and share thoughts and ideas about teaching, English and just general life. The sort of experience no tour can buy.

And of course, it would have been foolish of me to not sample the food in the canteen. Delicious, as you might expect. 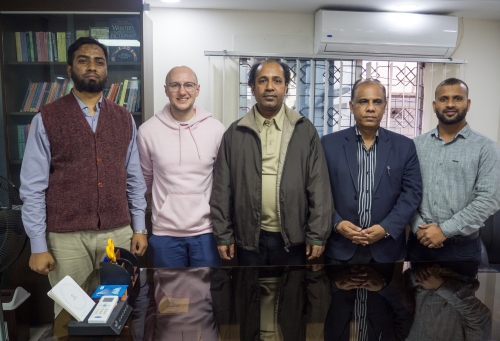 There are, of course, many guide books you can follow and tours you can take of Dhaka which will show you the National Museum, Bangabandhu’s House (well worth a visit – harrowing), the Parliament Building and much more. These are all useful, but the real charm of Bangladesh is in the people you meet.

Going with the flow and trusting my instincts has always been something that has served me well when travelling. There are times when the lack of a plan can turn out to be a bad thing, but this definitely wasn’t one of them. A great start to my time in Bangladesh.