With a kind-of-delicious-kind-of-just-sweet seven layer tea down me, I joined my new friends Shohan and Sakib who had hired a CNG (tuk tuk) for the day to see the sights of Sreemangal.

On to another winner by trusting my instincts.

I hadn’t made any plans beyond drinking tea and breathing fresh air after a great but exhausting four days in Dhaka, so to have a driver and a pair of locals plan my sightseeing for me was a lucky break. As I had already paid for three nights in the town I was a bit wary of doing everything in one day at first, but my experiences in Dhaka told me to trust my instincts once again and off I went!

Our driver, Faisal. I promise he was OK with this picture being taken.

Crammed into the back of the CNG, off we went. The first stop was the Bangladesh Tea Research Institute, which was unfortunately closing 10 minutes after we arrived. Well, I say ‘unfortunately’ but to be honest, I struggle with museums at the best of times – even ones about beer! A museum about tea might have sent me over the edge.

I like the idea of scientists working through the night to find a cure for tea addiction.

We did manage to have a quick snoop around the grounds, and even snuck into a small factory before being told in no uncertain terms to bugger off by who I can only assume was the boss. Must have been some top secret tea research going on. Then again, I don’t understand Bangla so he could have been very politely asking us to leave. I prefer to err on the side of dramatics for the sake of this blog. 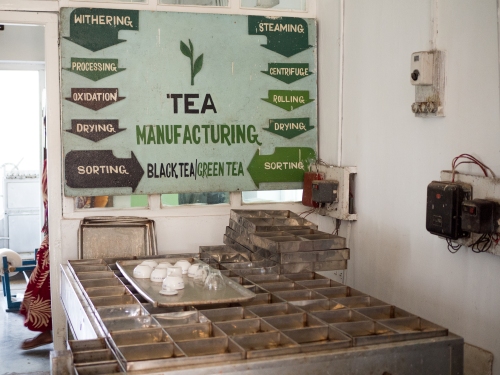 We were turfed out of here seconds after this picture was taken!

Back in the CNG, it was time for a winding drive through the hills and the sprawling tea fields before arriving at Madhabpur Lake. I really cannot emphasise enough just how refreshing this change of scenery was from the crazy capital.

The lake itself was quite nice. It had the potential to be a really peaceful spot where one could gather their thoughts and relax for a hour or two.

Note the word ‘potential’. I say this because for some bizarre reason that no one could seem to explain, there was a massive speaker stuck to a tree pumping out god-awful techno music that could be heard for miles in distance. Seriously, who looks at a nice lake and thinks: You know what this needs? Shit music. 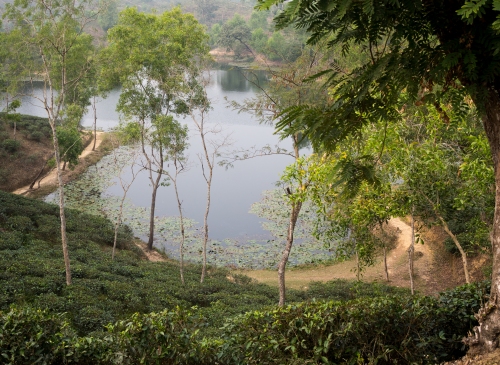 If you thought the bizarre-ness ended there then you are very much mistaken. What was to follow makes being held up for your money on a train by transgender ladies seem like a cakewalk.

As they live in Dhaka, the lads wanted to buy some of the local tea to take back for their friends and family. A few minutes later, the local tea wheeler-dealer rocks up on his motorbike and they start thrashing out a deal. So far, so good.

One thing that I could never figure out about Bangladeshi people is the tone of their conversations. I honestly wouldn’t be able to tell you if more than half of the Bengali conversations I heard were friendly or not. When you don’t understand a language, it’s easy to feel like everyone is yelling at each other.

This guy looked like he didn’t have a clue what I was doing there. That made two of us.

A potentially heated/friendly discussion somehow ended up with me in the back of the wheeler-dealer’s bike and being taken to the middle of his tomato fields. Just me and him in the middle of nowhere; he told me to “GO SEE” in an aggressive/friendly manner, while I apprehensively looked around for any signs of Shohan and Sakib, who were nowhere to be seen.

He picked up his phone and started shouting and gesticulating at the person on the other end. At this point my mind went into overdrive. Was I being held here as collateral? A bargaining chip to force them to buy tea?

As it happened it was all alright. He just took me to lighten the load in the CNG. Isn’t it funny how your mind works?

A much bigger smile than an hour beforehand!

Once the lads had turned up, my hostage-taker-turned-actually-quite-nice-guy insisting on showing me around his town, which he claimed to ‘run’. He treated me and the lads to lunch at ‘his’ restaurant before insisting we go and meet his family. 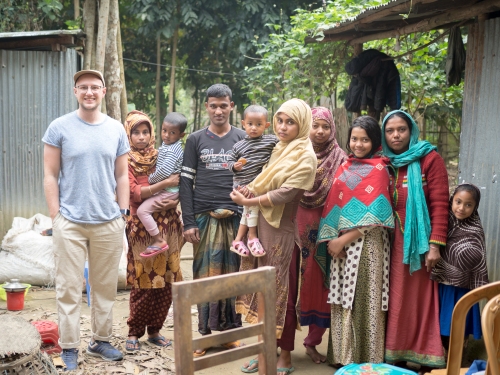 With our goodbyes said and having not been kidnapped, the last stop was Lawachara National Park. The lads were rushing for a 5pm bus back to Dhaka, so we had to make it a quick stop. Naturally I parted with 500 taka while the locals paid 50, and we were also required to hire a guide for our visit due to local regulations.

Probably not the best place for a person with a travel-induced distrust of monkeys.

It was very much a flying visit but in less than an hour we still managed to see some decent wildlife, a small village with a pink and green church as well as a monkey! 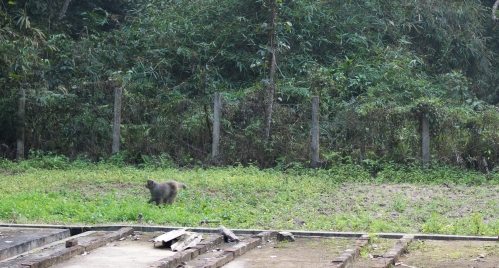 Thankfully the only one we saw was bloody miles away!

It would probably have been worth seeing more in a two or three hour visit but as I said when I was in Dhaka, I was more than happy to sacrifice some sightseeing for some decent interactions with new people.

Unfortunately the tour was soured a little by the guide constantly haranguing the lads for tips despite their protests that they were students and couldn’t really afford it. When his attentions turned to me I politely reminded him that I’d already paid ten times more than anyone else in the national park!

That said, it’s the only small complaint I have about another great day spent exploring Bangladesh with the locals. Well, that and the fact I thought I was maybe going to get kidnapped too. But yeah, apart from that, all good!

6 responses to “Sreemangal in a Day by Accident”