It’s fair to say that I wasn’t at my most enthusiastic by the time I reached Cox’s Bazar in mid-February. Yes, this post is that late.

A combination of the developing pandemic around the world, uncertainty about my return to China (a situation that, five months later, is still no clearer!) and an impending Master’s deadline meant that I was grouchier than usual. Discerning comments to yourselves, thank you very much. It’s with this in mind that I look back on my time in Cox’s Bazar with a feeling resembling regret.

The novelty of constant attention and selfies had worn off; the 24-hour chaos was no longer a sight to behold and everything just felt like a downright nuisance. I know that’s what I signed up for by travelling to a country like Bangladesh, but the whole situation led me to me being totally overwhelmed and almost wishing away my time in the country – something I’ve never done before.

A bit of ‘me time’ was very much in order, although that felt somewhat optimistic in Bangladesh. Having taken every opportunity to meet fellow travellers by staying in backpacker hostels and the like (you don’t meet many in Bangladesh, that’s for sure!), I decided to splurge on a bit of luxury by booking five nights at the aptly-named Long Beach Hotel (more on that later). £150 for five nights including breakfast – don’t mind if I do!

As for the town itself, it was different to anything I’d experienced in the country before. There’s a reason it’s known as Bangladesh’s top tourist hotspot! This is in no small part down to its claim that it has the world’s longest beach, which stretches a whopping 150 kilometres, or 93 miles to us Brits.

Walking along the beach felt like being in something of a time-warp. Like something you see on the old videos of British seaside resorts (which someone has superimposed iPhones into); kids eating candy floss, family photos being taken, and a general buzz of tangible excitement that is really hard to describe.

With the large majority of hotels, shops and restaurants concentrated on to the road running through the town, certain stretches of the beach tend to get absolutely rammed which seems a little crazy considering there’s so much of it. Quite ‘bazar’, you could say! Ok, that’s the last time I’m milking that pun.

The world’s longest beach, yet everyone congregates in the same few spots!

A few hundred metres away from the crowds and it felt like a different world. I pretty much had the beach to myself barring the occasional family or jogger here and there.

It wasn’t without its perks though. I managed to stumble upon on a game of football between the staff of two nearby hotels; a nice, unexpected footy fix after taking in the Bangabandhu Gold Cup whilst in Dhaka!

‘The Battle of the Hotels’ supposedly!

With a beach this long, it was impossible to know when to stop walking and – to be honest – the further I got away from the crowds the more enjoyable it was. I do class myself as a very extroverted person, but a bit of solitude doesn’t go amiss every so often.

Similarly, the further you get away from the main ‘strip’ (if you could call it that), the more interesting the sights become. Fishing boats for days and families going about their routine business, the real charm of Bangladesh. 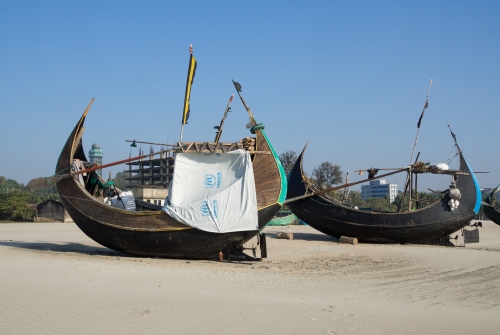 Unsurprisingly, the fishing industry is quite a big deal here.

Perhaps unsurprisingly, Cox’s Bazar is where I encountered by far the largest amount of foreigners during my time in Bangladesh. There is, I suppose, the tourism aspect, but it would be remiss to write about the town and not mention the darker side of things here.

Sadly, the beach isn’t the only world’s biggest thing that Cox’s Bazar lays claim to as the town is also home to what is apparently the world’s largest refugee camp. The large majority of inhabitants of the camp are Rohingya refugees who fled from neighbouring Myanmar. Now I’m not one to talk about things I’m completely uneducated on, so you won’t see me claiming to be an expert here. However from my reading and speaking to humanitarian volunteers I met in Cox’s Bazar, let’s just say conditions in the camp seem to be far from ideal.

That’s a long way of saying a lot of foreigners in Cox’s Bazar are there for humanitarian reasons, not tourism.

In a weird way, I suppose that kind of sums up my experience in Bangladesh. A true country of contrasts as I’ve said before, where in the very same unashamedly touristy town you will find the world’s largest refugee camp.

As it happened, Cox’s Bazar turned out to be my last stop in the country. The global shit-show that is the year 2020 was just cranking up to full-speed and I decided that staying in Bangladesh much longer was a bit of a risky move considering the travel bans that were being imposed left, right and centre.

An earlier than expected departure from Bangaldesh.

I departed with somewhat mixed feelings. Bangladesh is the most eye-opening place I’ve ever been, for both positive and negative reasons. Hands down.

In my two-and-a-bit weeks there, I met some of the kindest, most welcoming people of my life, had some unbelievable experiences (again, good and bad!) and ate some incredible food along the way. With very little positivity to come from 2020 thus far, it is these memories that I’ll look back on fondly whenever I think of Bangladesh, and maybe even this year.

4 responses to “A Truly ‘Bazar’ Beach Resort in Bangladesh”