Remember when we could go to football games?

Having brought my time in Bangladesh to an abrupt end about 10 days ahead of schedule, I found myself in Bali at the end of February – via a quick visit to the Philippines. The original plan was to settle down for a month of online teaching and reassess at the end of March; as I type this from my Bali apartment almost eight months later, it’s safe to assume that my options got more and more limited as time went by and I decided there were much worse places to be stuck than a tropical island.

As per usual, once Bali was decided upon as my destination of choice, I very quickly pencilled in the Bali United vs Madura United game on March 15th in order to tick off another country in which I’d watched a game of football. Having not seen a game of football since the Bangabandhu Gold Cup in Dhaka in January, I was getting withdrawal symptoms from the beautiful game so was more than a little bit excited for this one. 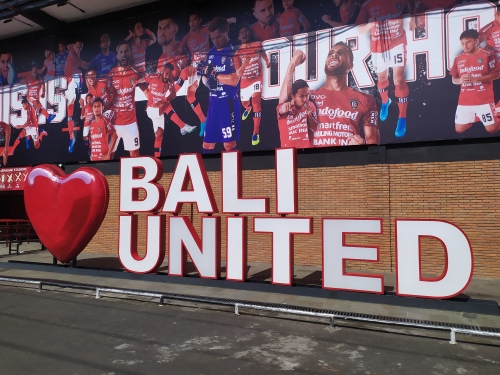 From my base in Canggu on the island’s south-west coast, it was about an hour’s scooter drive inland to United’s Kapten I Wayan Dipta Stadium in Gianyar. Try telling that name to a taxi driver after a few beers!

Upon arrival at the stadium I was impressed with just how modern it looked. A bit of research told me that the stadium itself was built in 2003, with Bali United only relocating there in 2014 and since then five billion IDR (£260,000) has been spent on renovations.

One of the more polished stadiums I’ve been to recently.

The first port of call was the club shop. I was keen to check out the replica shirts on offer as I hadn’t picked one up in Bangladesh much to my regret, so wanted at least one thing to show from these two new experiences. There were a number of stalls seemingly on the stadium’s land selling shirts outside the ground, but I wasn’t too sure how genuine they were so played it safe with the real McCoy.

If the stadium was surprisingly new then the club shop was even more modern, having only been opened in 2016! I was met with a choice of red, black or white kits; none of which really took my fancy due not only the colours but also the crazy amount of sponsorship plastered all over them. I’ve seen less advertising on Formula One cars!

A bit of last-minute homework!

In the end I settled for the home red kit, although in reality it was a coin toss between the three…if it’s even possible to settle a three-way debate with a coin toss?! At 400,000 IDR (£20ish) it was about four times more expensive (and uglier!) than the Bangladesh shirt I’d missed out on, that’ll teach me to hesitate in future.

Whilst queuing up to pay for my shirt I overheard another spectator asking for directions to a ticket gate and thought to myself: now there’s a familiar accent! I pretty much opened the conversation with those exact words and it turned out the fella was from Barnsley; after exchanging a few pleasantries, he asked me if I was on my own. I replied that I was and as it happened, it was my lucky day as he had a spare ticket for the VIP section which he’d snagged from a friend.

You don’t need to offer this northerner a freebie twice, and I quickly took Ryan up on his offer of a VIP ticket and promised to buy him a few pre-match beers to make up for it. 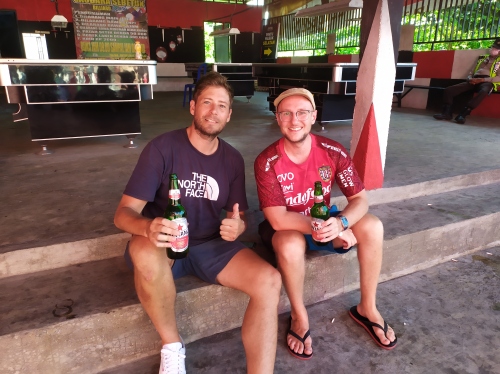 I’m not sure ‘pre-match beers’ are really a thing here.

As is often the case in many Asian countries, the stadium didn’t have a catering kiosk but instead a selection of stalls and outlets outside the gates. I have to say I much prefer this to the overpriced fare on offer in the west (with the exception of the ever-affordable German football!), and you often end up with a much more interesting variety of food on offer such as the fried squid at Chiang Mai FC!

We quickly found a cafe selling bottles of Bintang and settled in on the steps in front watching the crowds gather. Clearly the guy running the joint had a very poor memory or was just an absolute chancer, as when I went back for round two he tried to charge me an extra 10,000 IDR for the same order. It’s only 50p, but it’s a matter of principle I’m sure you’ll agree!

It was around this time that the away team’s ultras arrived and rather loudly made their presence felt. Naturally, we couldn’t resist a picture!

Thought these were Bali fans until we saw the flag!

We finally entered the stadium a few minutes before kick off and checked out our VIP seats. Padded seats were a very nice perk (although the ultra-cushioned ones at the back were out of bounds for us!) and we had a great view bang-on the centre circle. You get what you (don’t!) pay for.

It seemed we really were in with the VIPs as sat just behind us was a member of the Bali United coaching/scouting team who was taking rigorous notes on the opposition’s set-up. Safe to say he didn’t take too kindly to a pair of Englishmen peeking at his work as he proceeded to shield his notepad from us for the rest of the first half before stationing himself elsewhere for the remaining 45 minutes! 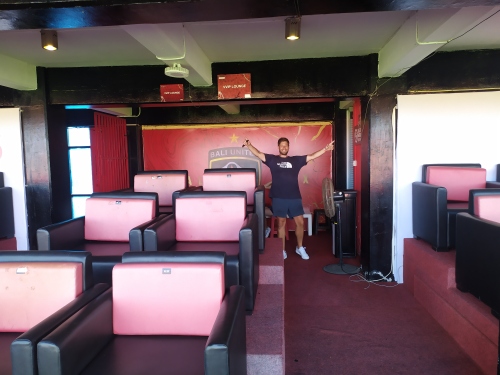 Looking for the prawn sandwiches.

We didn’t have to wait long for the opening goal as Bali’s Dutch forward Melvin Platje got them off to the best possible start after only three minutes with a nice instinctive finish after catching the visitors’ defence sleeping a little. An early goal can either be a good thing or a bad thing depending on how the teams react and knowing my curse of low-scoring games I feared the worst at this point.

Thankfully Bali didn’t sit back and protect their lead, and Madura made a good fist of getting back into the game too. Bali doubled their advantage on the 34th minute through another foreign import, Willian Pacheco, and once again questions needed to be asked of the Madura back line who allowed him to ghost in completely unchallenged at the back post.

The game took an interesting twist as Madura pulled one back just before half time. Excellent work down the left from Greg Nwokolo left Beto Gonçalves with a tap-in to make it 2-1 and set up the second half nicely.

After the break Madura really took the game to Bali with Nwokolo in particular giving the Bali right back a torrid time. As a draw looked more and more likely, it was something of a surprise for when the home team put the game to bed 10 minutes from time with Platje scoring his second – this time heading home from a corner.

Football and sunset: two of my favourite things!

The final whistle blew and we parted ways with plans to have beers in the future and to join the ultras in the stand behind the goal for the next game. The beers happened without a hiccup but as for the next game, the season was put on hold indefinitely the following week due to the worsening COVID-19 pandemic – the story of 2020!

One response to “Football in the Time of COVID in Bali!”