I’ve been known to travel far and wide to follow my favourite bands around whichever country I’m in. I made the short(ish) trip to Santander to see Vintage Trouble back in January and I’ve even flown back to England from Bilbao for one night to see Sleaford Mods, Manic Street Preachers and also The Coral.

It should come as no surprise to learn then that when The Coral announced a Spanish tour I was all over it. The usual venues were on the list, but Madrid and Barcelona fell during the week which, as a teacher, was an impossibility. Zaragoza was close, but again it was during the week. The only choice was León on a Saturday night; well, it’s only 200 miles from Bilbao…

The day started with a 7.40am train from Durango to Bilbao (who knew there were two 7 o’clocks on a Saturday?) before taking the only train from Bilbao to León at around 9.45am. I do find it a little perplexing living in a country where the bus system is infinitely better than the train system and this journey did little to help matters.

Having seen another fairly modern long-distance train leave for Madrid not long before ours, we were expecting something similar for our journey. As it happened, when we reached the platform we were greeted by something a little different.

I cannot emphasise how much worse it was than it looks.

Yep, one carriage that looked straight out of the 1970s. The interior wasn’t much better, either.

It seemed to take an absolute age to get out of the Basque Country (cheers, winding mountain tracks); after about 90 minutes we crossed the border into Spain and then spent another 40 minutes waiting at Miranda de Ebro while they attached a number of other carriages to the train. As I said, the rail system here isn’t the best.

The bag full of beers we took on the train helped pass the journey and we both had a bit of a head on us when we arrived in León five hours (200 miles, people) later. 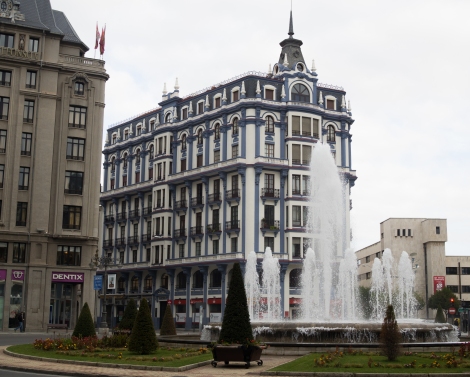 One of many fountain-filled roundabouts in León!

The plan was very much to drop our bags at the hotel (€16 each for a twin room – madness!) and just quickly see the sights. Ultimately though the sightseeing took a bit of a backseat as we’d got the taste for beer and this dictated where we went; besides, it seems you get free food with every beer in León so we were very much embracing the gastronomic culture.

That said, we did manage to see a few things. I’d be lying if I said we didn’t stumble upon Casa Botines by accident but it was still nice to see. It was strange to see a Gaudi monument which was both outside of Barcelona and also not a bit weird. Few and far between.

The most normal Gaudi building I’ve ever seen!

The main sight in León is probably the cathedral and we wouldn’t be the culture vultures we are had we not taken it in. In order to really tick this box we spent quite a bit of time eating and drinking in bars in view of the cathedral. How’s that for two birds with one stone?

Jokes aside, it was a really impressive cathedral and although we didn’t go in (€6 = three beers) we did admire it from the outside. It’s the thought that counts.

Trying to fit a massive cathedral into one picture with limited lenses…nope.

The gig soon rolled around and upon reaching León’s Espacio Vías it was perhaps surprising to see that they were turning out at such a small venue. No complaints from me though as we quickly picked up a few beers for a reasonable €2.50 and headed to the front to catch the support act: a local band doing a full set of Beatles covers. Talk about knowing your audience!

It made a change from the usual ‘will they be any good or not?’ stuff you get with a lot of support acts, as the band (apparently celebrating the 10th anniversary of León’s Taxman Beatles Bar – one we didn’t stumble on) played a set filled with absolute bangers. This was their set closer…

The main event rolled around and we found ourselves literally as close as we could get to the front without being on stage. I’ve seen The Coral a good few times including once on this tour a few months ago so I knew what to expect, but I can safely say I’ve never (and probably will never again!) been able to watch them perform in such close proximity.

The set was a career-spanning selection of tunes from their classic debut album right up to this years belting release Move Through the Dawn. The crowd responded to the biggest hits such as In the Morning and Dreaming of You, but it was the two Englishmen at the front who didn’t stop moving throughout the entire gig. We must have stood out like a pair of sore thumbs!

Up close and personal!

The gig came and went and in the aftermath we found ourselves chatting with bassist Paul Duffy and lead guitarist Paul Molloy, who were kind enough to take the time out for a picture with a pair of fanboys who’d travelled five hours on a train to come and see them. Good lads!

With only one return train on the Sunday we earmarked that morning for a final bit of sightseeing. We stopped by Iglesias San Marco and the Parador before stumbling on a real goldmine. 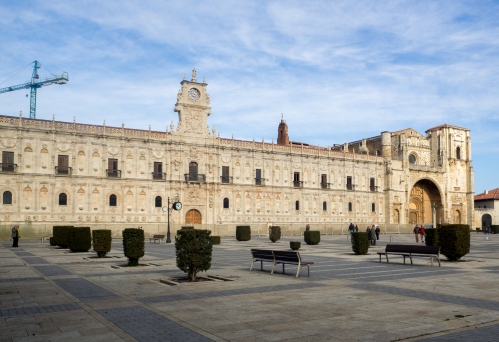 See the cathedral picture for a caption.

After some aimless wandering we still had a few hours to kill and found ourselves on the riverbank. It was a little odd to see any sort of open shops and general movement on a Sunday, but when we found the Spanish equivalent of a flea market we knew we’d struck gold.

Once we got past the generic cheap boxer shorts and Playboy jackets we found ourselves in a completely different world. Everything you could find in someone’s garage, spare room and down the back of the sofa was here and for sale. Gas generator? Check. Sink? Got it. Random car brake lights? You betcha. You can see the full inventory in the video below; you might want the sound on for this one.

With that we decided the trip had peaked, so settled on a quick beer and a bit more free food before taking the 3pm train back to Bilbao. We discovered on this journey that one of the attached carriages at Miranda de Ebro was a bar.

If only we’d known that 24 hours earlier.